Here's One Way Democrats Can Defeat Trump: Be Radically Anti-War

For too long, Democrats have accepted the national-security establishment consensus. Voters are desperate for a different kind of foreign policy 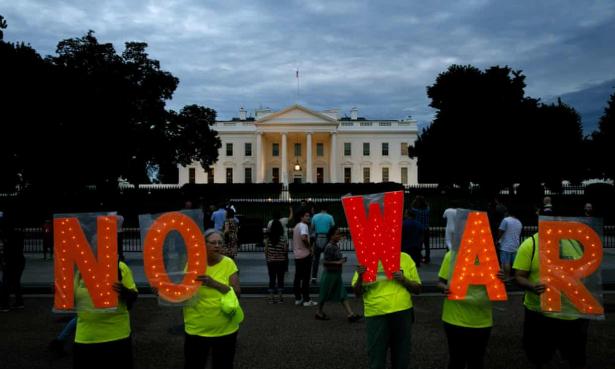 ‘They should listen to the American people and offer them a genuinely pro-peace message – standing firmly against Trump’s bellicosity as well as decades of bipartisan military intervention.’, Jacquelyn Martin/AP

President Trump is at it again. He promised to extricate the United States from endless war in the Middle East and still says that’s the goal. Yet he is taking almost every action, short of launching new invasions, to bring war upon us. In addition to defying Congress’s demand to cease support for the Saudi-led war in Yemen, he is holding the Iranian people hostage through draconian sanctions, demanding extreme and ill-defined concessions to make the suffering stop.

Trump’s schizophrenic foreign policy is almost too easy to criticize. It confounds Democrats much as Trump’s domestic policy did in 2016: the target seems so exposed that it’s actually difficult to land on a line of attack. In the first Democratic debates, candidates alternately accused Trump of accommodating adversaries (Russia and North Korea) and trying to crush them (Iran). Is the greater problem that Trump is alienating allies or that he’s indulging those like Saudi Arabia? The American people strongly disapprove of Trump’s handling of foreign policy, but they cannot hear every message at once.

Democrats have a unique opportunity to close the traditional national-security gap with Republicans, but only if they choose a clear direction for foreign policy and not just against Trump. They should listen to the American people and offer them a genuinely pro-peace message — standing firmly against Trump’s bellicosity as well as decades of bipartisan military intervention. This was the message some voters heard from Trump last time. Now Trump has failed to deliver, and Democrats can capitalize on that.

Case in point: the American public overwhelmingly supports Trump’s decision to call off airstrikes designed to retaliate against Iran after it shot down an American drone. A mere 36% favored a strike even in the heat of the moment, when Politico conducted a poll. The number was even smaller — 23% — among Democrats. Although the national-security commentariat casts Iran as a grave enemy, carrying on a grudge match that dates to the 1979 revolution that ousted the brutal, CIA-backed shah, ordinary Americans don’t nurse the same resentments. As a recent study found, a tiny minority, 8%, would opt for military action if Iran were to resume its nuclear weapons program. Six times as many would either tolerate a nuclear Iran while negotiations resumed or actually believe that Iran has the right to develop a nuclear deterrent.

‘Who will be bold enough to argue that Iranian actions are a predictable response to Trump’s provocations?’

Might the public have a point? The establishment assumes that Iran can never possess nuclear weapons, yet the United States lives with nuclear-armed adversaries like Russia and China and aligns with the nuclear-armed military dictatorship in Pakistan. In the first debates, however, the Democratic candidates gave indecisive messages. Although most supported returning to the nuclear agreement that Trump breached, several candidates harped on the agreement’s imperfections, repeating a neoconservative talking point. Senator Cory Booker even parroted Trump’s empty vow to negotiate a “better deal.”

Who will be bold enough to argue that Iranian actions are a predictable response to Trump’s provocations? That the real drawback of the nuclear deal was that it didn’t go far enough toward establishing normal relations with Iran — the one measure that could end America’s endless embroilment in Middle East wars?

Iran provides just one example of the divide between hawkish elites and the more open-minded public. Two new studies reveal how poorly Washington represents Americans’ foreign policy priorities: one by the Eurasia Group Foundation (EGF) and another by the Center for American Progress (CAP). Both reports emphasize Americans’ frustration with military overextension and their preference for diplomatic engagement.

CAP asked respondents to react to 20 different statements about foreign policy. The statement that received the most support proposed investing money at home rather than abroad. Which received the least? “The United States must prioritize spending for the military and defense, even if it means making cuts in other areas.” Likewise, EGF found American voters more than twice as likely to support cutting over raising military spending. By lavishing near-record funding on the Pentagon, the Trump administration has handed Democrats a gift. Democrats need to be willing to use it.

Of course, if voters wanted to cut military spending yet insisted on maintaining America’s globe-policing grand strategy, responsible leaders would have to choose which preference to follow. But voters are pretty coherent: they are willing to rethink America’s place in the world in order to avoid policing it. In the 2016 election, Hillary Clinton ran on the consensus of the national-security establishment: that America was the “indispensable nation” and “already great.” To voters, however, flying the flag of American exceptionalism isn’t the same as flying the American flag itself.

One-third of Americans told EGF flatly that the United States is “not an exceptional nation.” This was the plurality view among Democrats and people under 30 years old. The rest described America as exceptional, but attributed exceptionalism far more to what the country represents than to the actions it takes for the world. Exceptionalism, in other words, hardly implies a predisposition for military intervention and might well mean the opposite. Increasingly Americans are open to reimagining their country as one nation in the world, not above it.

The rising generation is particularly allergic to bromides about virtuous and limitless military deployments. Only 44% of millennials deem it “very important” for the United States to maintain a superior military, according to a Chicago Council on Global Affairs study. Similarly, EGF found Americans under 30 to be more willing than other age groups to favor abstaining from the use of force to stop human-rights abuses. As CAP concluded, “Younger voters are much less committed to traditional international and military engagement than are their elder cohorts.”

At the same time, young voters are eager to engage the world in ways that cooperate rather than coerce and kill. Their generation is the most enthusiastic of all on the issues of climate change, human rights, and global living standards. “Isolationists” they are not. But Democrats need to articulate a positive vision that combines peaceful engagement with military restraint — an American internationalism fit for the 21st century. Otherwise Trump’s nativist pitch will stand alone as the alternative to establishment platitudes.

The last two presidents, Obama and Trump, were unlikely aspirants to the office partly because they bucked national-security orthodoxy, blasting Middle East wars and the political class that started them. Obama and Trump won their elections partly for the same reason. Once in office, however, they struggled to deliver. Endless war continues; diplomacy is in tatters; Americans suffer from underinvestment where they live and work; and the greatest threats, like climate change, loom larger across the globe. In 2020, the candidate who not only identifies these problems, but offers real solutions, will benefit.

Mark Hannah is a senior fellow at the Eurasia Group Foundation and teaches at New York University. Stephen Wertheim is a Visiting Assistant Professor of History at Columbia University and a co-founder of the Quincy Institute.