Democrats running for president are distancing themselves from a charter school movement that once held powerful sway in the party. 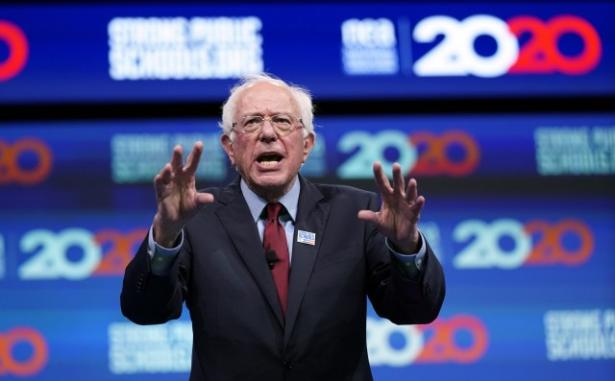 When Bernie Sanders, the Vermont senator running for president, released his wide-ranging education plan in mid-May, most of the media coverage focused on his proposals around charter schools. Commenters specifically focused on his calls to ban for-profit charters, which represent about 15 percent of the sector, and to halt federal funding for new charter schools until a national audit could assess the impact of charter growth in each state.

Many education policy experts suspect that such an audit would eventually lead to banning all new charters, but the Sanders campaign says they are just taking their cues from the NAACP. In 2016, the civil rights group called for a moratorium on new charters until existing ones were brought under the same transparency and accountability standards as traditional public schools.

Derrick Johnson, the president of the NAACP, told The New York Times that his organization loves that Sanders’s plan adopts their language around charters. “If we have a problem with the delivery of our education system, you don’t create ancillary systems for some of the children and not address the comprehensive problem,” he said.

To fight back, many charter supporters have sought to cast Sanders as uniquely extreme on the issue, especially in his efforts to link charter schools with segregation. But it’s hard to target Sanders as extreme when the entire 2020 field has joined and even surpassed Sanders on the issue. The charter school movement’s complete loss of clout in the Democratic Party is one of the more surprising stories of the election cycle.

At the start of July, the National Alliance for Public Charter Schools released an open letter, imploring Sanders to withdraw his call for a moratorium and “back away from calls for additional regulations that are not in the best interests of schools or students.” The 244 signatories defended the results from charters, citing a 2015 report from the Center for Research on Education Outcomes, and stressed that charters are in high-demand among families of color. “District-operated public schools have systemically failed students of color for generations,” they wrote.

While the letter didn’t specifically cite Sanders’s call to ban for-profit charters, the signatories included Fernando Zuleta, the president of the for-profit charter management company Academica, and seven board members of National Heritage Academies, another for-profit charter company that operates over 80 schools across nine states.

The candidates’ critical positions seem to be responding in part to this new political landscape. And as Education Secretary Betsy DeVos remains a staunch champion for both school vouchers and charters, Democrats see distancing themselves from education reform as an easy way to contrast themselves with the deeply unpopular Trump administration.

Earlier this month, at a presidential forum hosted by the National Education Association (NEA), New York City Mayor Bill de Blasio came out swinging against charters, which educate 10 percent of public school students in his city. While de Blasio has long been known as a charter school skeptic, and has battled with Eva Moskowitz, the leader of New York City’s largest charter network in the past, he also has sought to assure voters that he does not outright oppose charter schools, and can negotiate compromises with them.

At the forum he made clear he was no longer seeking such nuance or compromise. “I am angry about the privatizers,” he told the crowd. “I hate the privatizers and I want to stop them.” When asked a question about standardized testing, he responded, “Get away from high-stakes testing, get away from charter schools. No federal funding for charter schools.” His last point goes beyond what what Sanders has called for.

Meanwhile, Jay Inslee, the governor of Washington state, released his education plan this month, which also called for an end of federal funding to new charter schools. He made no mention of a study or even a moratorium. Inslee also called for improvements in charter accountability and transparency, and bolstering diversity at existing charter schools.

Inslee has been critical of charters in his home state, where just a dozen currently operate. In 2012, when he first ran for governor, he opposed a ballot initiative to allow the creation of charters and in 2015 he emphasized that his position remained unchanged. “I opposed the initiative that created charter schools because I did not believe that public money belongs in schools that lack public oversight and accountability,” he said.

Hours after Sanders’s education plan was released, Elizabeth Warren told reporters that she agreed for-profit charters are “a real problem.” She has not yet released her own K-12 plan. While the Massachusetts senator has supported charter schools in the past, in 2016 she came out against a high-profile ballot initiative that would have allowed charters to expand much more quickly in her state. The measure ended up failing, with 62 percent of voters siding against it.

South Bend Mayor Pete Buttigieg also came out to say he supports Sanders’s proposal to ban for-profit charter schools, though he affirmed a month earlier that charters “have a place” in the education landscape “as “a laboratory for techniques that can be replicated.”

Beto O’Rourke, who opposes a national moratorium on new charters, told the NEA presidential forum that “There is a place for public nonprofit charter schools, but private charter schools and voucher programs—not a single dime in my administration will go to them.” O’Rourke has supported charters in the past, and his wife is a former charter school leader who now sits on the board of a local education reform group that supports expanding charters in El Paso.

Even Joe Biden has made unusually critical comments about charter schools, notable as the Obama administration was very supportive of them and the former vice president generally seeks to align himself closely with Obama on the campaign trail. “I do not support any federal money for for-profit charter schools, period,” Biden said at a Houston town hall hosted by the American Federation of Teachers. He also added that “there are some charter schools that work.” His education plan does not actually mention charters.

Cory Booker, the Democratic candidate most closely associated with supporting charter schools, has also tamped down some of his charter rhetoric. While he continues to defend the educational reforms he led in Newark, including an expansion of charter schools, on the campaign trail he’s also sought to distance his hometown from charter experiments elsewhere.

Sen. Cory Booker speaks in Newton, IA: "I'm a guy who believes in public education and, in fact, I look at some of the charter laws that are written about this country and states like this and I find them really offensive." pic.twitter.com/gKFmEFKvGq

“I’ve seen charter school models that are outrageous and unacceptable. I’ve seen charter laws propagated by Republicans that just outright dangerous. And so I understand those people, I’m one of them, that wants to stop those kind of movements,” he told the Washington Examiner in response to a question about Sanders’s education plan. “But I’ve also seen in places like Newark, New Jersey, and other places where local leaders are making decisions that elevate the best educational possibilities of their children, and local leadership should be allowed to do that.”

The turn against charter schools within the Democratic primary does not offer the industry an easy way to separate Sanders or Warren from the rest of the 2020 field. It’s part of a larger sea change on education within the party, though one that’s unevenly reflected so far across racial groups.

UPDATE: While Elizabeth Warren has not yet released a K-12 plan, a spokesperson for her campaign told me that as president, Warren "will not request additional funding for charter schools."

Rachel M. Cohen is a journalist based in Washington, D.C., and a former American Prospect writing fellow.