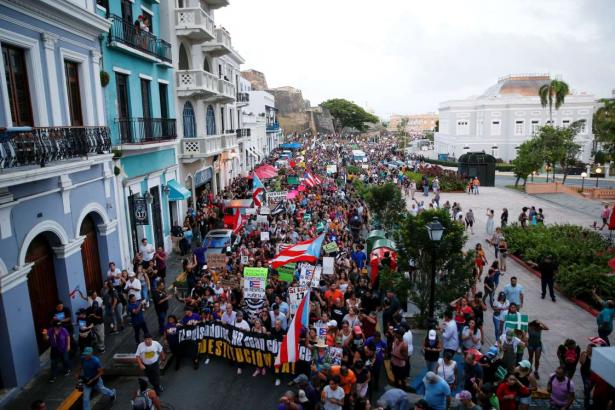 Thousands march to the Capitol Building and the governor's mansion on July 15, 2019 in San Juan, Puerto Rico. This is the third day protesters have called on Gov. Ricardo Rosselló to step down after a group chat was exposed that included misogyni, Photo by Jose Jimenez/Getty Images

Protests demanding the immediate resignation of Puerto Rican Gov. Ricardo A. Rosselló erupted for a third day Monday night, with police in riot gear creating a human barricade outside of the governor’s mansion and launching tear gas and pepper spray into the crowd.

Three Takes on the Greek Election

Inspired by the Gilets Jaunes, the black vest movement is highlighting the plight of undocumented migrants in France and taking forward the fight for their rights.

As Paris authorities had banned all "yellow vest" demonstrations near the parade, many protesters did not wear the high-visibility jackets that give their movement its name.

Feminists on the Front Line in Seven Countries

Across the world, feminists are fighting the far right and fascism.

Solomon Teka’s death provoked days of outrage and protests in Israel, with the nation’s main highways blocked by angry demonstrators that resulted in a few violent incidents.

New protests to follow the June 7 action, when thousands of demonstrators against corruption descended on Liberia’s capital.