Brigadistas will return to the U.S. to educate their communities about the realities seen and experienced in Cuba, and to advocate for the end of the blockade and travel ban, the return of occupied Guantánamo Bay, and truly normal relations. 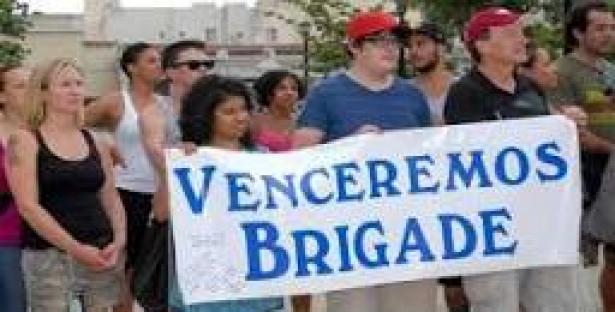 As the Trump Administration uses fear tactics to turn back the clock on Cuba policy, 160 Americans are planning a massive political and educational trip to protest lingering U.S. imperialism—above all the financial control that the U.S. still forcibly exerts over Cuba—which threatens to undermine the sovereignty of the Cuban people. The trip, organized by the Venceremos Brigade, will mark the 50th anniversary of this project, which, since 1969, has traveled annually in protest of the U.S. government’s travel restrictions and blockade on the island, while working to strengthen movements for justice in the U.S. through exchange and collaboration with Cuba.

This will be the largest and most accessible Venceremos Brigade in over a decade and will include many people from the U.S. who have traveled with the Brigade sometime in the last 50 years. Since its founding 10 years after the socialist revolution in Cuba, the Brigade has taken more than 10,000 people from the U.S. to the island, where they have worked as volunteers on civic projects, delivered thousands of pounds of material aid, and engaged in discourse with people from various sectors of Cuban society. Brigade members, known as “brigadistas,” come from all over the U.S. and are diverse in race, ethnicity, gender, sexual orientation, occupation, and political affiliation. The guiding purpose of the Brigade is solidarity.

“Sometimes the best way to be in solidarity is by building community. That is what this trip taught me,” said Hector Rivera, a brigadista from the 48th trip in 2017. “It was refreshing, healing, grounding, and uplifting. It was essential in my path towards liberation.”

The Venceremos Brigade itself has been on an evolving path over the years as well. In 2003, in response to a crackdown by the Bush Administration on travel to Cuba, the Brigade made their “Travel Challenge” a public act of civil disobedience, as a way to increase pressure on the U.S. government to lift the economic blockade and change policy towards Cuba. In the following years, they succeeded in greatly reducing the enforcement of sanctions against travelers, but their work has been met with threats from the U.S. Treasury Department and harassment from the FBI. Still, the Venceremos Brigade continues to organize annual trips and demand that the U.S. government act to rectify its harmful Cuba policy.

Most recently, the Trump Administration has reversed many of the advances toward normalization initiated by the Obama Administration in late 2014, expelling diplomats from the Cuban Embassy, withdrawing personnel from the U.S. Embassy, curtailing business travel, eliminating the “people-to-people” subcategory for travel, continuing to spread misinformation about Cuban society, and levying some of the largest blockade violation fines ever.

As the Trump Administration continues its domestic attacks on civil and human rights and interest in socialism grows among the U.S. population, people are looking for alternatives in a Cuban society where there is no such thing as student debt and everyone has health insurance. Now more than ever, the Venceremos Brigade’s trip to Cuba takes on great political significance. Brigadistas will return to the U.S. to educate their communities about the realities seen and experienced in Cuba, and to advocate for the end of the blockade and travel ban, the return of occupied Guantánamo Bay, and truly normal relations.

The Venceremos (“we shall overcome”) Brigade is an intergenerational educational work project that has brought 10,000 Americans to Cuba since 1969 in an act of civil disobedience in solidarity with the Cuban Revolution.