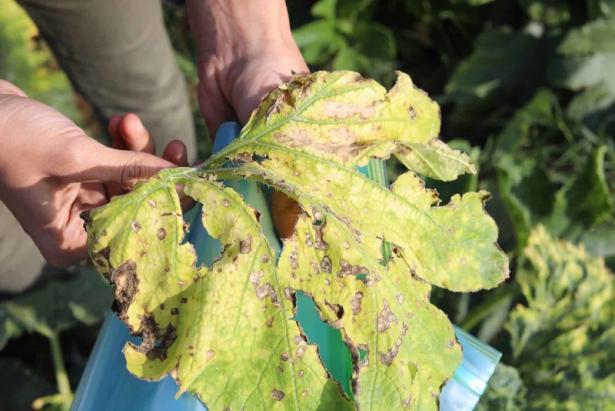 Thousands of acres of Gaza farmland have been damaged by Israel’s aerial spraying of herbicide., Forensic Architecture

Israel’s military propagandists are at it again.

A video recently tweeted by COGAT, the bureaucratic arm of Israel’s military occupation, celebrates its efforts to teach Palestinian farmers in the West Bank about hybrid fruits and vegetables.

What the military doesn’t boast of in its cheerful short video is its systematic poisoning of besieged Gaza’s most fertile agricultural land.

Since 2014, the Israeli military has used crop-dusting planes to spray herbicide along Gaza’s eastern boundary. It has long razed agricultural and residential land along the so-called “buffer zone” to increase its soldiers’ field of vision.

The unannounced spraying of herbicide takes place inside Israel when winds blow the toxins into Gaza.

In 2016, Israel’s defense ministry admitted to the practice in response to a freedom of information request.

“It confirmed that the substances sprayed contained three herbicides,” according to a new report by London-based research group Forensic Architecture:

Roundup, manufactured by Monsanto, which is owned by the German company Bayer, is being sued by thousands of plaintiffs in the US who assert that the weedkiller caused their cancer.

A cancer research body funded by the World Bank classifies glyphosate as “probably carcinogenic to humans.”

The use of commercial herbicides by a military occupier against an occupied population raises the question of responsibility for companies that supply these products under the UN Guiding Principles in Business and Human Rights.

Bayer was part of a German industrial group that ran slave labor camps and supplied poison gas for Nazi death camps during the Holocaust. The company’s CEO apologized for these acts in 1995.

Nearly 30 spraying operations took place along the Gaza-Israel boundary between 2014 and 2018.

Forensic Architecture simulated spraying events recorded on video by combining key environmental variables and “the characteristics of the spraying system fixed to the plane.”

The simulation indicated that “harmful concentrations of herbicide drift reached in excess of 300 meters into Gaza” during spraying on 5 April 2017.

“This suggests that Palestinian crops could have been harmed as a result.”

Satellite images following the spraying reveal the degradation of vegetation across much of the area potentially affected by the herbicide drift.

Farmers reported damage to 250 acres of crops following a spraying event in southern Gaza in January 2018.

“One year later, in December 2018, we gathered similar samples of [damaged] leaves three days after an army spray that exhibited characteristic damage from a contact herbicide,” the report adds.

Forensic Architecture concludes that Israel’s spraying of herbicides that drift into Gaza “has uncontrollable effects damaging Palestinian farms hundreds of meters away” from the boundary.

Some 3,400 acres of farmland have been damaged by Israel’s aerial spraying, according to Gaza’s agriculture ministry.

In addition to their crops, farmers in Gaza have lost fertilizer, water and labor.

Animals that grazed on land affected by the herbicide drift have died.

“The chemicals used for spraying stay in the soil for months and even years, and may have negative health consequences for people who consume contaminated crops and/or inhale the herbicide,” the International Committee of the Red Cross told the Israeli newspaper Haaretz last year.

Israel has not sprayed herbicide in Gaza this year, which has encouraged farmers to increase their production:

Occupation authorities rejected a petition from human rights groups calling for compensation to farmers in Gaza who have incurred losses because of the spraying.

“However, they did provide compensation to an Israeli agricultural town, Nahal Oz, near the buffer zone in 2015, after farmers sued because they lost crops after a spraying,” The Guardian reports.

The destruction of crops due to herbicide spraying is not the only Israeli obstacle faced by Gaza farmers.

Israel caused half a billion dollars of direct and indirect damage to the farming sector during its 2014 assault on Gaza, destroying irrigation wells and greenhouses as well as killing livestock.

Farmers have been killed by Israeli forces while working their land. One-third of Gaza’s farmland is unsafe for cultivation because it falls in Israel’s poorly defined no-go zone which it enforces with live fire.

Israel has imposed a blockade on the territory since 2007 and has prevented the export of produce from Gaza to the West Bank and Israel, traditionally the Strip’s largest markets.

Occupation authorities have also blocked the entry of vaccines used by veterinarians to prevent the spread of disease among livestock.

Agriculture is just one of Gaza’s productive sectors that have ground to a near halt over the past decade of Israeli blockade.

Gaza now has one of the highest unemployment rates in the world. Its population has become reliant on humanitarian aid.

Israel has also sprayed herbicide on crops planted by Bedouin communities not recognized by the state.

In 2004, Israel’s high court accepted a petition filed by human rights groups seeking an end to the spraying because of the danger posed to the health of people, their animals and the environment.

The petition noted that the label affixed to Roundup containers states: “Do Not Apply This Product Using Aerial Spray Equipment.”

Maureen Clare Murphy is the managing editor of The Electronic Intifada and lives in Chicago.