Sicilian Fishermen Risk Prison to Rescue Migrants: `No Human Would Turn Away'

A father and son describe what it's like to hear desperate cries on the sea at night as Italy hardens its stance against refugees. If people are in danger at sea, sailors save them, without asking where they come from or the colour of their skin. 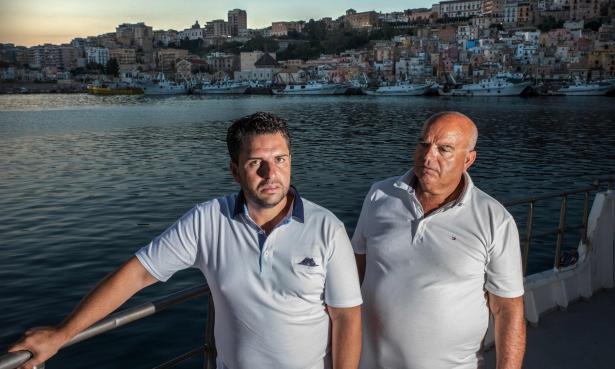 Carlo Giarratana and his father, Gaspare, in Sciacca, Sicily. The family has fished off the Libyan coast for more than 50 years., Photograph: Alessio Mamo/The Observer // The Guardian

Captain Carlo Giarratano didn’t think twice when, late last month, during a night-time fishing expedition off the coast of Libya, he heard desperate cries of help from 50 migrants aboard a dinghy that had run out of fuel and was taking on water. The 36-year-old Sicilian lives by the law of the sea. He reached the migrants and offered them all the food and drink he had. While his father Gaspare coordinated the aid effort from land, Carlo waited almost 24 hours for an Italian coastguard ship that finally transferred the migrants to Sicily.

News of that rescue spread around the world, because not only was it kind, it was brave. Ever since Italy’s far-right interior minister, Matteo Salvini, closed Italian ports to rescue ships, the Giarratanos have known that such an act could land them with a hefty fine or jail. But if confronted with the same situation again, they say they’d do it all over 1,000 times.

“No seaman would ever return to port without the certainty of having saved those lives,” says Carlo, whose family has sailed the Mediterranean for four generations. “If I had ignored those cries for help, I wouldn’t have had the courage to face the sea again.”

I meet the Giarratanos at the port of Sciacca, a fishing village on the southwestern coast of Sicily. I know the town like the back of my hand, having been born and raised there among the low-rise, colourful homes built atop an enormous cliff overlooking the sea. I remember the Giarratanos from the days I’d skip school with my friends and secretly take to the sea aboard a small fishing boat. We’d stay near the pier and wait for the large vessels returning from several days of fishing along the Libyan coast.

Those men were our heroes, with their tired eyes, sunburnt skin and ships overflowing with fish. We wanted to be like them, because in my hometown those men – heroic and adventurous like Lord Jim, rough and fearless like Captain Ahab, stubborn and nostalgic like Hemingway’s “Old Man” Santiago – are not simply fishermen; they are demigods, mortals raised to a divine rank.

Fishermen in Sciacca are the only ones authorised to carry, barefoot, the one-tonne statue of the Madonna del Soccorso during religious processions. Legend has it that the statue was found at sea and therefore the sea has a divine nature: ignoring its laws, for Sicilian people, means ignoring God. That’s why the fishing boats generally bear the names of saints and apostles – except for the Giarratanos’, which is called the Accursio Giarratano.

“He was my son,” says Gaspare, his eyes swelling with tears. “He died in 2002 from a serious illness. He was 15. Now he guides me at sea. And since then, with every rescue, Accursio is present.”

If there are people in danger at sea, sailors save them, without asking where they come from or the colour of their skin

Having suffered such a loss themselves, they cannot bear the thought of other families, other parents, other brothers, enduring the same pain. So whenever they see people in need, they rescue them.

“Last November we saved 149 migrants in the same area,” says Carlo. “But that rescue didn’t make news because the Italian government, which in any case had already closed the ports to rescue ships, still hadn’t passed the security decree.”

In December 2018 the Italian government approved a security decree targeting asylum rights. The rules left hundreds in legal limbo by removing humanitarian protection for those not eligible for refugee status but otherwise unable to return home, and were applied by several Italian cities soon afterwards. Then, in June, Rome passed a new bill, once again drafted by Salvini, that punished non-governmental organisation rescue boats bringing migrants to Italy without permission with fines of up to €50,000 and possible imprisonment for crew members.

“I’d be lying if I told you I didn’t think I might end up in prison when I saw that dinghy in distress,” says Carlo. “But I knew in my heart that a dirty conscience would have been worse than prison. I would have been haunted until my death, and maybe even beyond, by those desperate cries for help.” It was 3am when Giarratano and his crew located the dinghy in the waters between Malta and Libya, where the Giarratanos have cast their nets for scabbard fish for more than 50 years. The migrants had left Libya the previous day, but their dinghy had quickly run into difficulty.

“We threw them a pail to empty the water,” says Carlo. “We had little food – just melba toast and water. But they needed it more than we did. Then I alerted the authorities. I told them I wouldn’t leave until the last migrant was safe. This is what we sailors do. If there are people in danger at sea, we save them, without asking where they come from or the colour of their skin.”

Malta was the nearest EU country, but the Maltese coastguard appears not to have responded to the SOS. Hours passed and the heat became unbearable. From land, Gaspare asked Carlo to wait while he contacted the press. Weighing on his mind was not only the duty to rescue the people, but also, as a father, to protect his son.

“I wonder if even one of our politicians has ever heard desperate cries for help at high sea in the black of night,” Gaspare says. “I wonder what they would have done. No human being – sailor or not – would have turned away.” The Italian coastguard patrol boat arrived after almost 24 hours and the migrants were transferred to Sicily, where they disembarked a few days later.

“They had no life vests or food,” says Carlo. “They ran out of fuel and their dinghy would have lost air in a few hours. If you decide to cross the sea in those conditions, then you’re willing to die. It means that what you’re leaving behind is even worse, hell.”

Carlo reached Sciacca the following day. He was given a hero’s welcome from the townspeople and Italian press. Gaspare was there, too, eager to embrace his son. Shy and reserved, Carlo answered their questions.

He doesn’t want to be a hero, he says, he was just doing his duty.

“When the migrants were safely aboard the coastguard ship, they all turned to us in a gesture of gratitude, hands on their hearts. That’s the image I’ll carry with me for the rest of my life, which will allow me to face the sea every day without regret.”