Last week my travels across the continent and among railroad track workers found me between Phoenix and East L.A. 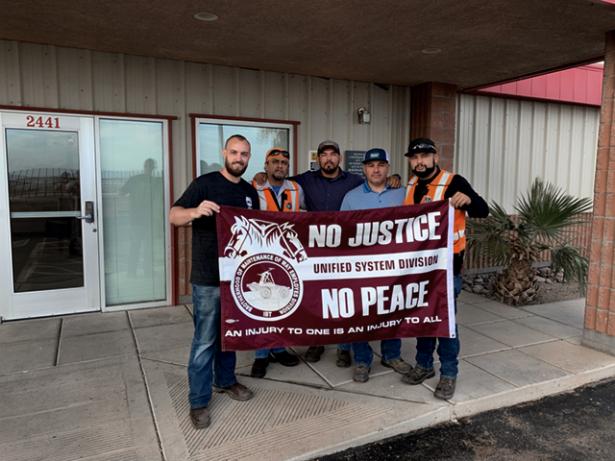 Brotherhood of Maintenance of Way (BMWED-IBT)

Last week my travels across the continent and among railroad track workers found me between Phoenix and East L.A. This section of Union Pacific’s rail network is the western end of the famed “Sunset Route”, running roughly along the Mexican Border. With a brand new union rep from Sacramento at the wheel, our task was to find as many members of the Brotherhood of Maintenance of Way (BMWED-IBT) as we could.

As we barreled across the heat stricken desolation, there were glum reminders of dystopian America along the route: remote desert prisons, and forgotten desert towns in various states of abandon despite their glorious names of Aztec, Mohawk, or Ligurta.

On the eastern approach to Yuma the infamous Border Wall arose in the distance. As we neared it, the footprints all over the barren sand landscape were impossible to ignore.

RV parks arose from the desert sand like another surreal hellish nightmare. After four of these monstrosities in a row, I blurted out, “Who has money these days to pay for RV gas?” We were about to find out.

At the Yuma depot we found a four member “Headquarter Gang.” In the 5am “cool” of 95F, our conversation revolved around the next round of negotiations with the Class 1 Freight Railroads. The members filled out contract surveys, and recounted the successes and challenges they experienced uniting the 13 different craft unions in their area.

Eventually, the role of the U.S. President in rail negotiations came up. The 2nd round of the Democratic Party debates were kicking off that night.

Juan C. asked, “Are we going to have to deal with Trump again?”

“This is really crazy,” he continued. “Even Mexico has a President who is good for the people. Did you hear what AMLO did with the pensions?”

“No.” I responded, somewhat in awe that I was now talking about Mexican President Andres Manuel Lopez Obrador – known as AMLO – with an American railroader!

“My grandmother lives outside Mexicali. Her pension recently went up from 600 pesos [$30] to 2000 pesos! AMLO made that possible. He cut waste in the federal government to find the money to afford this. It’s not a lot of money, but to my grandmother it means everything!”

From there the conversation returned to healthcare. Like most union workers, railroaders have been slammed with escalating health insurance costs – a reality lost on many Democratic Party candidates, we learned from the debates, who mistakenly think union members are in love with their employer-based insurance.

Members of the BMWED, whose monopolistic employers clock billions of dollars in profits per quarter, now pay $228.89 per month in premiums and an Out-Of-Pocket Maximum in hospital bills of $4000 per year. BMWED members are almost universally pissed.

Evidently Mexico is a point of refuge for many Americans on this front.

“My wife and I take our children to Los Algodones to go to the dentist and get eye glasses. I often go there to see the doctor – the guy I see is really good. He went to school at UC Riverside,” said Jose C.

Evidently, the RV parks on the outskirts of Yuma cater mainly to “Snow Birds” who drive across the Border to Mexico (a short, 10 minute drive) for affordable health care and medicines. The approach to Los Algodones is often backed up with cars and RVs bearing American license plates. (Editor’s note: many of these same “Snow Birds” supplement their income by seasonal migrant work in mass distribution centers run by the likes of Amazon, again living in their RVs)

Unfortunately, while proximity to a country with a far more sane health care approach works for our members in Yuma – this is not the case for the overwhelming majority of railroaders or Americans. For this very reason, the BMWED first endorsed “Medicare For All” in 2014, and aggressively organizes its members to engage with the campaign to win MFA across the country.

Carey Dall has coordinated the Internal Organizing Department of the Brotherhood of Maintenance of Way (BMWED-IBT) since 2015.  The BMWED represents track and structure maintenance workers on the major railroads in all of the lower 48 states.  Prior to his current role, Dall was a 15 year member of the ILWU where he spent 6 years as an International Organizer.  He got his start in the labor movement as a “Salt” working with the ILWU to organize bike and driver messengers in the SF Bay Area.