Trump's Trade War Could Make the Trump Recession a Reality

The longer Donald Trump persists in his trade war, the greater the chances are of an outright slump developing. That is what the financial markets are telling us, also the implicit message from the Federal Reserve. 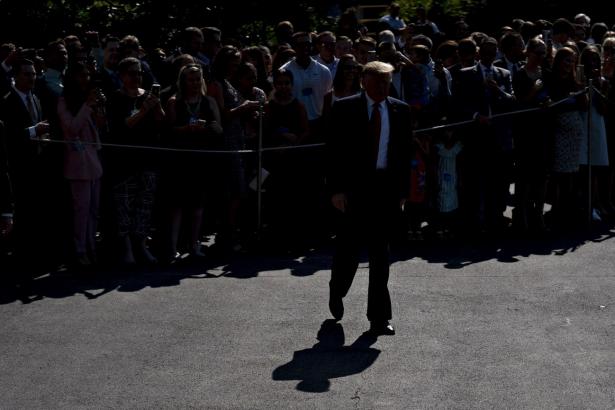 The longer the President persists in his trade war with China, the greater the chances are of an outright slump developing in the U.S. economy.,Photograph by Andrew Harrer / Bloomberg / Getty // The New Yorker

forecasting is a bit of a mug’s game. Mature capitalist economies tend to plod along, growing at modest rates, until they don’t. Despite extensive efforts, nobody has discovered a reliable way to predict when that moment will arrive and, subsequently, a recession will begin. Sometimes there are warning signs, such as asset-market bubbles developing, inflation picking up, the Fed raising interest rates, and trade deficits soaring. But, even if some of these signs are flashing amber, as they were in the late nineteen-nineties and the period between 2005 and 2007, it’s hard to know when they are going to turn red. The lesson of recent U.S. history is that expansions tend to last longer than many people expect.

It would be a mistake, therefore, to get too alarmed—or too excited, depending on your politics—about the big fall in the U.S. stock market on Wednesday. Sparked by negative news regarding the international economy and an unusual development in the bond market, the Dow Jones Industrial Average plungedeight hundred points. Despite the sell-off, most Wall Street economists still think it is unlikely that #TrumpRecession, the hashtag trending on Twitter during the Dow’s slide, will become a reality before the 2020 election. The truth is that no one can be certain of what is going to happen.

What we do know for sure is that, the longer Donald Trump persists in his trade war, the greater the chances are of an outright slump developing. That is what the financial markets are telling us: on Wednesday, the yield on ten-year Treasury bonds fell below the yield on two-year bonds, in what is known as an “inversion,” which has sometimes been the harbinger of a recession. It is also the implicit message from the Federal Reserve, which is mulling another cut in interest rates, to head off economic weakness. And it is something that at least some people around Trump have apparently acknowledged, finally. Hence the Administration’s decision, which it announced on Tuesday, to suspend its plan to expand tariffs on Chinese imports to a wide range of consumer goods, such as smartphones, toys, and video games.

It has been barely two weeks since Trump announced his intention to expand the tariffs, which were set to go into effect on September 1st. The aim was to pressure China to give up ground in trade talks that had, yet again, stalled. But, in this instance, according to numerous reports, many of the President’s senior advisers, including Robert Lighthizer, the U.S. Trade Representative, and Steven Mnuchin, the Treasury Secretary, privately thought that escalation was a bad idea. Trump went ahead anyway, which was consistent with the approach he has taken all along. He has repeatedly argued that tariffs are great because they protect U.S. jobs and raise money for the U.S. Treasury. Contradicting the findings of detailed academic studies, he has also claimed that Chinese exporters bear the cost of the import duties, rather than U.S. consumers. If you take this view of tariffs, why wouldn’t you up the ante?

Because it is based on wishful thinking, of course—something even Trump has now been forced to acknowledge. In confirming the postponement of the new tariffs until December 15th, he said, “We’re doing this for the Christmas season, just in case some of the tariffs would have an impact on the U.S. consumers.” So tariffs aren’t costless to consumers, after all. And they certainly aren’t costless to the stock market and the broader economy. In the days following Trump’s original announcement about expanding the tariffs, on August 1st, the Dow fell by almost a thousand points. If the warnings from Lighthizer and Mnuchin weren’t sufficient to persuade Trump to rethink his approach, the downward lurch in the market apparently was.

“Trump has now revealed his pain point,” Yahoo Finance’s Rick Newman notedon Wednesday. “He’s unwilling to tax American consumers beyond a nominal level, or stomach the stock-market turmoil steep tariffs cause. This is the fundamental problem with tariffs as a tool to gain leverage in trade negotiations: To inflict pain on a trade partner, you have to hurt your own economy first, through higher taxes.”

Not just your own economy. On Wednesday, we learned that Germany’s economy shrank slightly in the three months from April to June, and that, in July, China’s industrial output expanded at its lowest rate since 2002. The new data suggested that trade-related weakness in the Chinese economy, which is the world’s second largest, is now impacting other countries, including Germany, which exports a lot of vehicles, machinery, and other goods to China. This raised fears of a global downward spiral of the sort that some trade experts warned about back when Trump embarked on his campaign to upend the global trading system. “It’s a dangerous game,” Dan Ivascyn, the chief investment officer at the big fund manager Pimco, told the Financial Times on Wednesday. “We think some economic damage is dealt every day that this uncertainty lingers.”

In an appearance on Fox Business, Janet Yellen, the former head of the Fed, amplified the point. Noting that uncertainty about trade “is having a marked impact on business confidence,” among other negative effects, Yellen said she thought the U.S. economy was still strong enough to avoid a recession. Then she added, “But the odds have clearly risen, and they are higher than I’m frankly comfortable with.”

[John Cassidy has been a staff writer at The New Yorker since 1995. In 2012, he began writing a daily column about politics and economics on newyorker.com. He has covered two Presidential elections, and has written extensively about the Trump Administration. He is also a regular contributor to The New Yorker’s political podcast, “Politics and More.” He has written many articles for the magazine, on topics ranging from Alan Greenspan and Ben Bernanke to the intelligence failures before the Iraqi War and the economics of John Maynard Keynes. He is the author of two books: “How Markets Fail: The Logic of Economic Calamities” and “Dot.Con: How America Lost Its Mind and Money in the Internet Era.” Before joining The New Yorker, he worked for the Sunday Times of London and the Post. He graduated from Oxford University in 1984 and from the Columbia School of Journalism in 1986. He grew up in Leeds, West Yorkshire.]