books A World to Win: A Utopian Vision of Communism's Techno-future

Fascism may be resurging, but so is socialism. Yet what would a genuine post-scarcity, egalitarian, democratic, communist society look like? The author thinks he knows, offering tantalizing if evanescent glimpses that tweak the imagination. 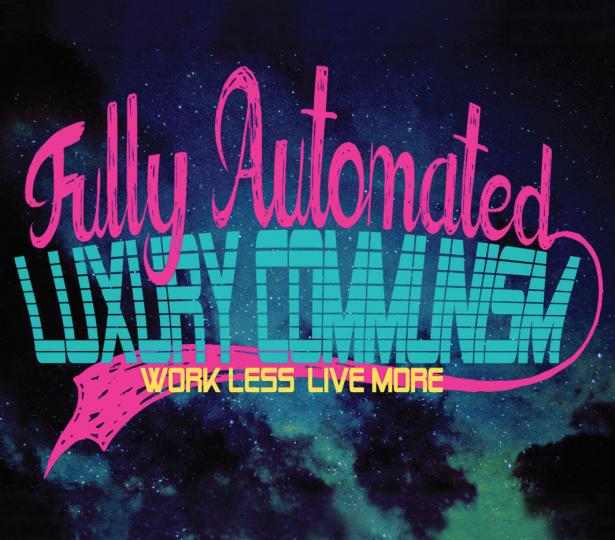 Capitalism isn’t working. We know this deep in our bones even if we live in one of the few cities where life is bustling and busy and we can pretend that this situation can continue. Yet even in those cities, the signs are everywhere. They are in the ubiquitous homeless population sleeping in the door-nooks of closed stores or in tent cities. In New York, where I live, they are in the crumbling subway system, its stations jam-packed with frustrated commuters trying to get to work even as the city begs to give tax breaks to Amazon for the honor of hosting its new campus. The system is broken. Or, rather, as Marx once noted, it is continuing its natural tendency to concentrate wealth at the top and misery at the bottom. For the past few decades we’ve lived under what the late cultural critic Mark Fisher called “capitalist realism”—the feeling that it is impossible to imagine an alternative to the current system. Yet fissures have appeared in capitalist realism’s facade, and old ideas have begun to creep into those cracks. Fascism is back, it’s true, but so is socialism, in the pages of prestige magazines and even on nighttime TV news and in contests for president or prime minister. The word, it seems, has lost its ability to shock. And when socialism no longer shocks, what’s next?

To Marx, socialism wasn’t the end point—he considered it a transitional stage preceding communism. The proletariat would seize control of the state and run it for themselves, to produce the conditions under which communism would be possible. The state would fade into memory and work would cease to be work. Such a system, of course, has never been achieved. And the regimes that called themselves “Communist” in the twentieth century put many of today’s socialists off the idea. Not so Aaron Bastani, the cofounder of Novara Media, a platform for left-wing articles, podcasts, and radio and video programs, whose new book Fully Automated Luxury Communism attempts to take the word back to Marx’s post-work, post-scarcity future.

The word communism returned, like so many things, as a meme. The first time I can recall seeing the term full communism in semi-ironic form was in 2011, on a Google Doc that was being passed around during Occupy Wall Street; it spread rapidly, additions proliferated, and then someone deleted the whole thing. Its specter has haunted the millennial-Left Web ever since. A quick search of Facebook for “Fully Automated Luxury Communism” turns up a clutch of pages, groups, and at least one self-declared “political party,” as well as a lot more memes. Most of the pages spend little time talking about politics, instead sharing in-jokes blending disgust for capitalism with gestures toward the possibilities of wild futures. My favorite is “Fully Automated Luxury Gay Space Communism,” a page with more than 83,000 likes, but you can also find “Fully Automated Luxury Gay Satanic Communism,” “Transhumanist Fully Automated Luxury Space Communism,” and more. Organizer Mindy Isser writes a newsletter called Towards a Fully Automated Luxury Communist Future. The idea is tongue-in-cheek, but there is something sincere about it too: It betrays a real desire for a different world that feels both impossibly distant and close at hand. The memes were the first glimpses of hope after the 2008 crash and the first sign that a new era was coming.

It makes sense, then, that Bastani, who cut his political teeth in the student movement and anti-austerity rebellions of the early 2010s in the UK, would be the one to write a book attempting to put a real politics to the “joke.” Fully Automated Luxury Communism (FALC), Bastani insists, should be taken seriously. In his book, he tries to establish a horizon beyond that of today’s democratic socialists. Communism, he argues, is possible now in a way that it simply wasn’t in Marx’s or even Lenin’s time; because technological change threatens to make work obsolete, we can create a classless society and share the fruits of the robots’ labor. We can imagine, finally, “a society in which work is eliminated, scarcity replaced by abundance and where labour and leisure blend into one another.” This is, for him, an opportunity for a world where luxury isn’t hoarded by the ultra-rich. The pleasures, he argues, are the point. “Communism is luxurious—or it isn’t communism.”

Bastani writes earnestly and at breakneck speed. His opening treatment of the current political moment and its various crises is quickly dispensed with—he doesn’t think he needs to convince readers that something is wrong with capitalism. Marx makes an appearance, followed by John Maynard Keynes and (surprisingly) management theorist Peter Drucker, each of whom imagined that technology could reduce human toil. Since each of these thinkers made his case, the pace of transformation has only accelerated. Unlike the 1990s, the peak era of capitalist realism, the late 2010s have made it clear that things won’t look the same tomorrow, much less five years from now. But there remains a tension between the inevitability of change and who benefits from that change. “The present moment,” Bastani writes, “defined by challenges such as rising temperatures, technological unemployment, income inequality and societal ageing—to name just a few—poses questions which extend beyond mere technical competence.”

Despite all the Marx, at times Bastani seems to have Keynes’s faith—or perhaps that of Silicon Valley’s techno-utopians—in the progress of capitalism. Much of the book is taken up with a litany of technologies that currently exist or, he assures us, “will” soon exist to make all of our problems of scarcity—including that pesky climate crisis—melt into abundance. From solar panels to asteroid mining to vat-grown meat to DNA editing, it’s a whirlwind of possibilities that, for sure, might happen. But Bastani skims past most of the potential hellscapes that also might happen as a result of some of these technologies—like the potential for eugenics if we can custom-select our DNA, to take just one example.

As I considered all this, I couldn’t help thinking of another company that promised life-altering, world-changing marvels: Theranos. It was striking to read Bastani’s ode to technological abundance while the internet buzzed about the blood-testing tech start-up that turned out to be, at best, wildly overpromised and at worst (founder Elizabeth Holmes’s trial is yet to come) a criminal fraud. Holmes, who conned some of the world’s most powerful people and not a few supposedly skeptical reporters, is a stark reminder not to trust capitalists bearing gifts. The promises of profit-seeking executives, from Holmes to Elon Musk, have repeatedly been found to be greatly exaggerated, and their advances, even when couched in the language of altruism, are ultimately designed to line their own pockets. Might technological development look different under communism—or even under a social-democratic government led by the likes of Jeremy Corbyn or Bernie Sanders? Bastani doesn’t answer—or ask—these questions.

Fully Automated Luxury Communism is at its best when it’s focused on the horrors of the current world, a world that, he notes, “will soon have the technology to sequence the genome of every organism on Earth” yet “also permits thousands to drown in the Mediterranean every year.” But these reminders, these moments where he brings a human touch, are too rare, and without them Bastani’s book ends up seeming a little slick, like promo videos for the tech miracles he champions. If the struggle against capitalism is lost, there will be real consequences—it’s not just a matter of whether we will have robot butlers. The stakes are getting clearer (and the potential outcomes grimmer) every year.

After fantastic visions of the techno-future, it’s surprising that Bastani’s vision of transitional politics is, essentially, Corbynism. When it comes time to make a political case, he seems trapped in the problem he succinctly diagnoses at the beginning of the book, where he notes that it is all too easy to feel like the future is already written. In a sense, Fully Automated Luxury Communism could not be otherwise—setting big far-off goals means accepting that one probably won’t be around to reach them. Marx himself avoided “writing recipes for the cookshops of the future.”

I didn’t expect Bastani to provide directions from Corbynism to communism or to draw a precise map to FALC; what I did wish for was more acknowledgment of how fierce the struggle will have to be to get even to Corbynism (or, here in the US, to Sanders-ism or Ocasio-Cortez-ism). As I was writing this review, the story broke that British soldiers were using photos of Corbyn for target practice, and fears of a potential Corbyn government, economist Grace Blakeley told me this winter, are estimated to be causing more capital flight than a potential no-deal Brexit.

Nonetheless, I find Bastani’s optimism refreshing, even if I don’t share his faith in the wisdom of Elon Musk. A communist horizon that offers something beyond better-managed capitalism or nostalgia for the 1950s world of factory jobs, picket fences, and nuclear families seems more necessary than ever, as it is manifestly clear that the politics of fear have failed to rouse the masses to action. Bastani’s call, “to create a collective politics that goes beyond scarcity, work and the narrow forms of selfhood and identity offered by neoliberalism,” resonates.

The first door has been broken down. Socialists are holding office and putting forward plans that seemed impossible to imagine when that first “full communism” meme hit my inbox. We desperately need to dream bigger than the mild social democracy currently on offer—for no other reason than getting just to that point the first time around required actual revolutions. Beyond dreaming, we are going to need to fight to make it possible.

Book Author Aaron Bastani is co-founder and senior editor at Novara Media and has a doctorate from the University of London. His research interests include new media, social movements and political economy. He has written for Vice, the Guardian, the London Review of Books and the New York Times and regularly appears as a commentator on the BBC and Sky News.

[Essayist Sarah Jaffe is a reporting fellow at the Type Media Institute and the author of Necessary Trouble: Americans in Revolt (Bold Type Books, 2016), a review of which was posted on Portside Culture HERE.]