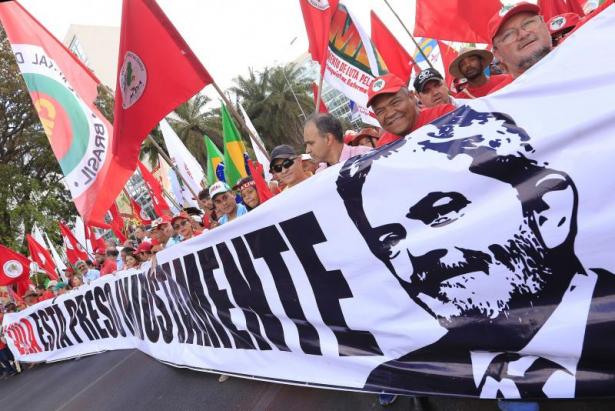 Marching to free Lula in 2018, File Photo by Joedson Alves/EPA-EFE

On July 15, in the Tambo Valley, in the province of Islay, Arequipa, a work stoppage began against the Tía María mining project. It was the response of the population to the government's decision to grant a construction license to the Southern Peru Cooper Corporation (SPCC), although it was evident that there was no permission or social acceptance....

On July 30, the Departmental Federation of Workers of Arequipa called for an indefinite regional strike from August 5, demanding that the national government cancel the construction license for the project. This decision was supported by the regional governor of Arequipa, Cáceres Llica.

On the first day of regional strike in Arequipa, more than 30 social organizations were mobilized, most importantly civil construction workers and merchants, who joined the protest platform in solidarity with the communities of the Tambo Valley. Traffic was paralyzed in the north cone of the region's capital and in the main roads of the city....

After the first day, blockades of the Pan-American highway continued in different provinces and districts of the region, especially in Islay and Caylloma, and the struggle of the farmers of the Tambo Valley received support from regions such as Puno and Moquegua. In Ilo, there was a momentary traffic block against Tía María and the Quellaveco (Anglo American) mine. In Puno, different organizations coalesced to bring their strength to bear. At that time, the possibility that unemployment was projected at the regional macro level throughout the South was not ruled out.

The scenario was complicated by the authorization - by Supreme Resolution - of the intervention of the Armed Forces in the port of Matarani. This measure was questioned by some specialists who considered it openly unconstitutional.

Subsequently, a millionaire campaign was initiated in the main media at the national level in which a group of citizens of Arequipa demonstrated against the paralysis and the efforts of civic organizations. Then it was learned that this collective and the entire campaign was funded by the SPCC.

On August 9, in the face of the risk of loss of human lives and greater economic losses due to the worsening of the conflict, the National Mining Council announced the suspension of the mining project's construction license. As noted, this does not imply the final cancellation of the project. The conflict in the Tambo Valley demonstrates the limitations of the current legal framework and highlights the governance gaps that still persist.

In recent days, recordings of the meeting that President Vizcarra held with the governors of the southern regions on July 24 have been made public. These revelations have opened a whole debate and serious questions from a sector of the press and the political opposition, especially from the majority in Congress. The ministers have been invited to the Congress of the Republic to explain what happened in Arequipa. ...

The truth is that three governments have tried to carry out this project and have not succeeded. The García government tried and failed. Then he tried Humala, who approved the Environmental Impact Study and had to suspend the construction license to put out the protest. Since then, Tía María has already cost us seven deaths.

Following the resignation of Gov. Rosselló, a series of people's assemblies have emerged throughout Puerto Rico to keep the conversation—and the popular movement—going.

The further devaluation of the Argentine peso last week has plunged the working class of Argentina into further economic insecurity and instability.

__________
Two Communist Lawmakers Are Suddenly Setting the Agenda in Chile

A labor-reform bill introduced by Camila Vallejo and Karol Cariola, who made a name for themselves as student-movement leaders eight years ago, is gaining widespread support -- and putting the two lawmakers in the crosshairs of right-leaning President Sebastian Pinera.

__________
Student Movement Stands Up to the Honduran Regime

It’s been ten years since a US-backed coup installed a repressive neoliberal regime in Honduras. Now, a student movement has emerged to challenge the government’s agenda of privatization and militarization.

Pro-worker rhetoric combined with reprivatisation has confused Maduro’s support base and threatens the popular alliances formed in earlier struggles.

The 2019 Declaration, “Unity of the peoples against imperialism”, recognizes that “the multifaceted reactionary offensive of US imperialism and the oligarchic rightwing allies has been deepened. Before the disintegrating plan of the right, let us counter with the integrating, sovereign and dignified plan of our peoples. In the face of free trade agreements, promoted by the United States, we strengthen sovereign integration projects such as CELAC, Alba-TCP, Mercosur and other popular and regional integration initiatives.”