What Sanders' Political Revolution Looks Like in Real Life

He's enlisting his massive volunteer base to pressure companies to change their labor practices - and joining several protests himself. His moves serve to make clear to voters what Sanders means when he calls for a "political revolution." 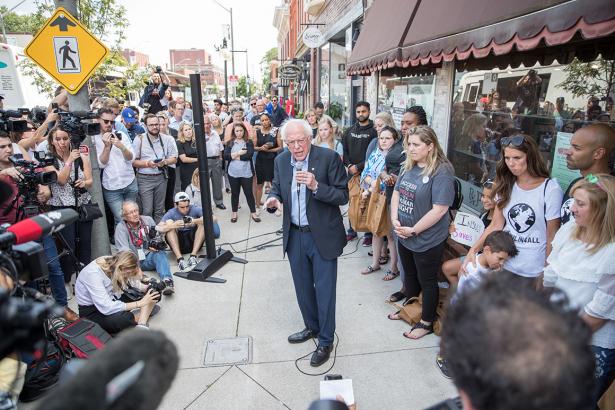 Sen. Bernie Sanders talks about the cost of insulin in the U.S. versus Canada on July 28 in Windsor, Canada. Sanders brought buses of reporters and activists to Canada to highlight the cost of prescription drugs., credit: Scott Eisen/Getty Images // Politico

In May, an Illinois man emailed info@berniesanders.com with a plea: Graduate students at the University of Chicago were going on strike, and he wanted Bernie Sanders’ presidential team to help.

A few days later, Sanders’ aides obliged, and then some: They used his massive email list to target his fans in the area, asking them to stand on the picket line with students. Some 100,000 texts and emails went out from the campaign, and hundreds of people showed up.

The Vermont senator’s team was ready to act quickly on the stranger’s request because it dovetailed with its plan to harness his state-of-the-art digital infrastructure and grassroots army of volunteers to keep Sanders’ promise to help American workers from the campaign trail. While other candidates have also stood on picket lines and used their email lists to raise money for progressive groups, the scale of Sanders’ efforts appears to be unparalleled in the 2020 field.His moves also serve an important campaign purpose: to make clear to voters what Sanders means when he calls for a “political revolution.” His advisers acknowledge that the concept is fuzzy to some Democrats and they need to clearly show how he would usher in a revolt from the White House if elected president.

“He knows that when he talks about a revolution, there are some segments of people who don’t know what he’s talking about,” said Faiz Shakir, Sanders’ campaign manager. “That’s why you see us trying to demonstrate that much more clearly — to give you a sense of what he would be like as a president.”

Sanders has tapped his email list to push his fans to join picket lines and labor rallies at Veterans Affairs hospitals, University of California campuses, Ralphs grocery stores, Reagan National Airport, a Kaiser Permanente campus, and McDonald’s restaurants in at least 12 places, including the first-in-the-nation caucus state Iowa and delegate-rich California. His efforts haven’t been limited to labor events: Sanders has also used his campaign apparatus to recruit volunteers to get out the vote for Queens District Attorney candidate Tiffany Cabán in New York and to boost turnout at a protest at a proposed migrant detention center in Oklahoma.

At times, Sanders' team has utilized the same infrastructure to raise money for labor groups and other progressive organizations, like when it pulled in $100,000 for a strike fund for Los Angeles teachers by emailing its base. Sanders has also sought to portray himself as the country’s “organizer in chief” through public appearances, including when he crashed a Walmart shareholders meeting to push for a $15 hourly minimum wage or brought two buses of reporters and activists to Canada to highlight the exorbitant cost of prescription drugs in the United States.

The campaign’s moves reflect the intense competition underway for progressive voters and labor endorsements among the 20-plus candidates vying for the Democratic nomination. Sanders’ aides and allies are careful to point out that he has spent his career trying to build a political movement, including by standing on picket lines for decades. But they also think his efforts could help in the primary by building goodwill in the labor movement and distinguishing him from rivals. 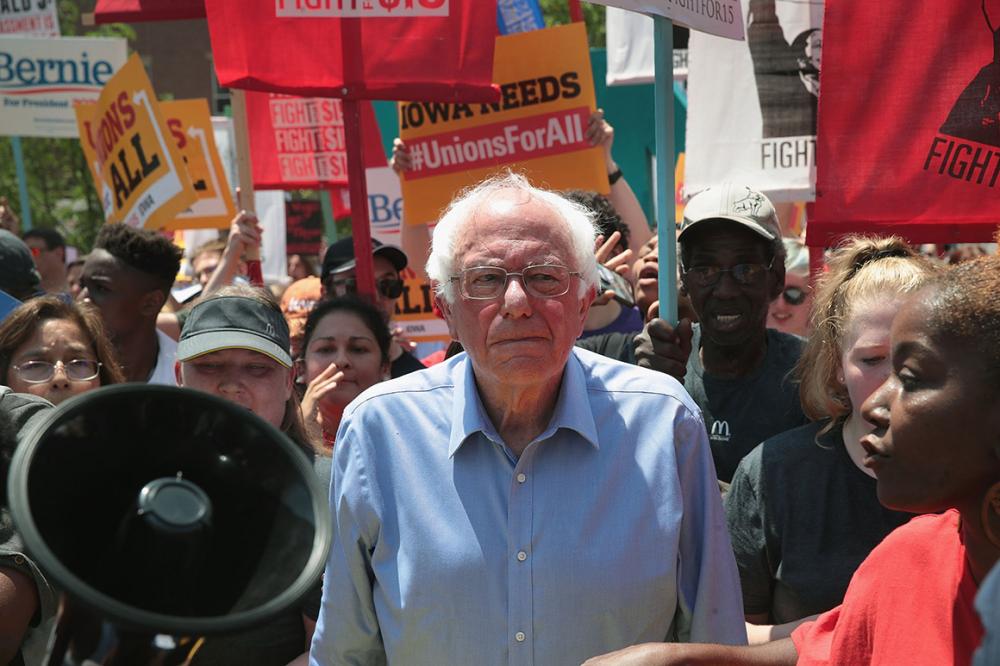 Scott Slawson, president of Pennsylvania’s United Electrical, Radio & Machine Workers of America Local 506, had similar words for Sanders after the Vermont senator dragged his supporters to the union’s strike earlier this year. “The outpouring of support we had from the campaign was amazing,” he said.

After Sanders’ appearance at the Walmart shareholders meeting, the campaign revealed that the company’s workers were his biggest donor in the second fundraising quarter of the year. Likewise, the Los Angeles Unified School Districtwas among the top 10 employers of donors to his campaign after the second primary debate last month.

Sanders’ campaign said it has sent hundreds of thousands of emails and a half-million texts to his supporters to push them to attend more than 50 strikes, protests and other events this year. It's a significant investment for a presidential campaign, considering there's only so much time or money Sanders' supporters are willing to give overall, and he's asking that they commit themselves to causes that only indirectly benefit his candidacy.

The decision to use his campaign in a sustained way to show solidarity with union members and other progressive groups was made before he launched his second bid for the White House, his aides said. According to his advisers, he determined he would only run for president again if he could do that. He believes that one of his biggest achievements is the fact that Amazon raised its minimum wage to $15 an hour after he rallied millions of people to the idea during his 2016 presidential campaign.

Sanders’ allies see his “theory of change” as one of the key ways he differs from fellow left-wing populist Sen. Elizabeth Warren. In their view, he's pushing for change by building a movement to overturn the political and economic status quo, while she wants to overhaul the government by working from within the system. One former government official described Warren's theory of change as being, "You focus on one or two levers, and you push them hard."

But it’s unclear whether Sanders’ efforts are resonating with voters — or if Democrats, after three years of Trump, will want to be more engaged in politics, not less, once he leaves office.

Shi Williams, an operations coordinator at Philadelphia's Hahnemann University Hospital, recently attended a rally protesting the planned closure of the facility where one of Sanders' campaign co-chiefs spoke. Sanders' team also emailed his supporters to push them to come to the event. Williams hasn't yet decided who she’ll vote for in the Democratic primary, but she praised Sanders' campaign for drawing attention to the cause.

There’s another problem facing Sanders: By his own estimation, no president in the history of the United States has pursued progress with a mass movement of workers. In other words, there’s no model for him to point to when he tries to explain to voters what a revolution would look like.

“We actually had this conversation one time, and he said to me candidly, ‘I don’t think there’s a precedent for this,’” Shakir said. “He thinks that’s one of the challenges that he faces, quite frankly, when he talks about building or bringing about a revolution.”

See where he stands on all the issues »