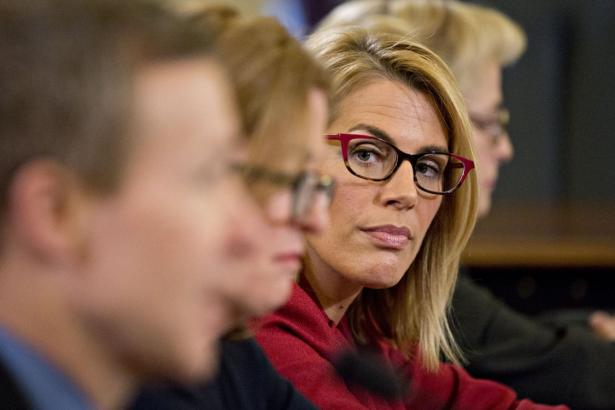 Sara Nelson listens during a U.S. Senate subcommittee hearing in Washington D.C. on May 4, 2017. , Andrew Harrer/Bloomberg via Getty Images

Sara Nelson, the president of the Association of Flight Attendants-CWA union (AFA-CWA) and an emerging force in an energized labor movement, had the foot soldiers of the left’s budding “political revolution” in tears.

She was speaking at the Democratic Socialists of America’s biennial convention in Atlanta last month and began with a story from the early history of American workers’ rights.

A fast-rising star – and a woman tipped for the very top of the US labor movement – Nelson described a small band of laundresses in Atlanta, all black women, many of them former slaves, who formed the Washing Society. In 1881, the women organized a strike for higher wages – $1 for every dozen pounds of laundry – and greater autonomy over their industry.

"Most would have said what they were attempting to do was impossible,” Nelson said, her voice wavering.

“There were no labor laws to protect them. There was no single employer with whom they could negotiate, and their low-skilled work could easily be taken over by others.”

Yet the women persisted and, against the odds, prevailed. Militancy – and sometimes just the threat of it – can work even in the most dire circumstances, Nelson said. It’s a principle she believes in deeply.

For many, Nelson represents the new face of labor. With manufacturing and mining on a long-term decline, unions have concentrated their battles on the service sector. Teachers’ strikes and efforts to unionize fast food and hotel workers in the Fight for $15 movement – sectors dominated by women – have shown unions still have a role.

Earlier this year, staring down the longest government shutdown in US history, Nelson gained national attention when she called for a general strike as a way of pressuring Donald Trump and Congress to act. The idea was radical – and supporters say it set in motion a series of events that brought the weeks-long shutdown to an end.

“People think power is a limited resource,” she said in Atlanta. “But using power builds power.”

Nelson has struck a chord with progressives and grassroots activists who have amplified calls for her to run for labor’s top job: president of the nation’s largest federation of unions, the 12.5 million-member AFL-CIO.

“She knows how to excite people and how to give them the sense that a lot more is possible,” said Larry Cohen, a former president of the Communications Workers of America, of which AFA is an affiliate.

The unofficial race to succeed Richard Trumka as president of AFL-CIO is taking place mostly behind the scenes at this stage. But the longtime labor journalist Steven Greenhouse reported that Nelson and Liz Shuler, the AFL-CIO secretary-treasurer, are already vying for the role.

Nelson said she finds the prospect of leading the federation “intriguing” and “exciting”. But she stopped short of declaring her intention to run, concerned that a protracted leadership contest might distract from the challenges facing organized labor.

“I would love to be a part of that,” she said. “I can tell you that for sure. But I think it is too far off and we have too many battles.”

Decades of well-funded political opposition and a string of legal setbacks have decimated organized labor in America. The share of US workers covered by unions has fallen dramatically from more than 30% in the mid-20th century to 10.5% in 2018, a historic low. At the same time, wages for low-income workers have stagnated, while productivity increases, corporate profits soar and income inequality rises.

“The reason that we have this level of inequality is not a mistake,” Nelson said. “It is the result of very well-planned, aggressive steps taken by the right to destroy the labor movement and to take that check in our democracy away. And they almost succeeded.”

A 2018 supreme court decision that stripped public sector unions of their ability to collect “fair-share fees” from non-union members – Janus vAFSCME – was supposed to be the death knell of American labor. But it wasn’t.

There are signs the ruling reinvigorated organizing campaigns, which has emboldened the labor movement and led to gains for some unions. A Gallup poll released this month found Americans support for unions at 64%, approaching a 50-year high.

Randi Weingarten, president of the American Federation of Teachers, said the movement is drawing fresh energy from a wave of worker uprisings across the country. In the past 18 months, teachers in West Virginia, Oklahoma and Arizona, Marriott hotel workers, Stop & Shop supermarket employees and Uber and Lyft drivers have challenged their bosses with strikes and protest to demand higher wages and better working conditions.

“There is a hunger for the people to rise up,” Weingarten said. “We all have that hunger. We do that through politics and we do that through collective action but at the same time the question has to be: what’s the next step?”

For Nelson, the next step is to build alliances. In May, she joined the United Mine Workers of America at a rally on Capitol Hill to urge Congress to pass legislation to protect coalminers’ pensions.

The spectacle of flight attendants in their pressed uniforms and knotted neck scarves standing in solidarity with miners wearing camouflage print union shirts was “fairly unusual”, conceded Cecil Roberts, president of the United Mine Workers. But this is what Nelson says she means when she talks about worker “solidarity”.

As the head of the AFA, she has worked to forge relationships with labor groups in other industries. Nelson argues that if workers join forces over wages and working conditions, they are less likely to be swayed by Trump’s efforts to divide them by race, culture and identity.

“No one is born with sexism, racism, ageism in their heart,” Nelson said in her Atlanta speech. “These are the tactics of the boss, of those who want all the money and all the power to deny us solidarity, the greatest force for good. Expose it. Call it out. Deal with it. And in our unions and on our picket lines we can do exactly that.”

Earlier this year, her union sprang to action with a petition and media campaign to release a flight attendant who was detained for weeks by immigration officials in Texas after working a flight to Mexico because of her status under the Deferred Action for Childhood Arrivals (Daca) program. And Nelson has also been a vocal critic of Boeing in the wake of two 737 Max jet crashes, that killed hundreds of people and led to the plane’s grounding. In June, she told a congressional panel that her union had noticed a “chastened tone” from the company.

"What Sara Nelson offers is a different kind of labor movement,” said Erik Loomis, a labor historian at the University of Rhode Island and the author of A History of America in 10 Strikes. “One that is, for the first time in a long time, charismatic and inspiring and one that speaks not only to current labor union members but also to the vast majority of the American working class that doesn’t belong to a union, or can’t have a union, or where it’s really difficult to form a union.”

Nelson’s embrace of militant tactics – and her reputation as a fierce negotiator – has drawn comparisons to the tough-talking, cigar-smoking union bosses of labor’s golden era. But today’s labor leaders, facing entrenched opposition to organizing and collective bargaining, have been forced to find creative ways to build power in a hostile legal environment.

“Nelson knows her history. She knows that unions and working people build power without having the law on their side and without accommodating or bowing to the interest of companies,” said Rebecca Givan, a professor of labor studies and employment relations at Rutgers University. “But clearly she believes there is value in reviving some of those strategies.”

The 2020 presidential race will be a test of labor’s political clout as the Democratic candidates fiercely compete for their support. There is a diversity of political views among the union ranks, as demonstrated by a debate over how best to expand health coverage.

Nelson is a vocal supporter of a Medicare for All single-payer healthcare system. She argues that contract negotiations are increasingly consumed by fights over coverage and benefits, and believes that if the issue were moved “off the table” unions could spend more time fighting for wage increases and better working conditions.

But some leaders have raised concerns that a single-payer system, championed by the progressive presidential hopefuls Bernie Sanders and Elizabeth Warren, could negatively affect the benefits they have already painstakingly negotiated. One of the loudest opponents of Medicare for All has been the International Association of Fire Fighters, which endorsed former vice-president Joe Biden for the Democratic nomination.

Harold Schaitberger, the union’s president, says his union’s healthcare plan is designed to meet the unique and specific healthcare needs of firefighters that a Medicare plan is unlikely to provide.

Sanders recently introduced a pro-labor plan that sought to assuage those worries. The proposal would effectively require employers to return any healthcare savings to workers in the form of wage increases or benefits.

Still, Schaitberger worries that candidates like Sanders risk moving the Democratic party “too far to the left” and leaving workers like his members behind.

“I see us succeeding in many ways,” he said, “but I don’t know that the success of labor can be attributed to the associated energy on what I describe as the ultra-progressive, ultra-liberal far left.”

Nelson has not publicly backed a 2020 candidate and her union is still designing its endorsement process. But she speaks highly of progressive stalwarts Sanders and Warren, both of whom have introduced expansive plans for growing unions and expanding worker protections.

“What’s exciting is that this year we actually have some real choices for labor,” she said.

In Atlanta, Nelson urged the audience not to wait until then to get involved.

“Change comes fast when the risk becomes too great for those in power,” she said.