Most tenants don't understand their rights, whether they have a legal defense in an eviction case, and whether they can get a better deal in a settlement. 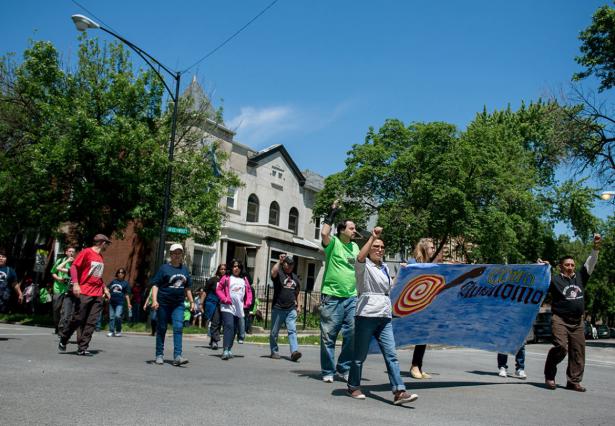 It’s not been four months since the Lawyers’ Committee for Better Housing unveiled a new eviction data portal, but there’s already been progress on several of the group’s major recommendations, though much more needs to be done, said Mark Swartz, LCBH executive director.

The issue of eviction has gotten increased attention since sociologist Matthew Desmond’s 2016 book “Evicted.” Desmond detailed the ways eviction is not just a result but also a cause of poverty, because it saps tenants’ limited resources, undermines their support networks and causes job loss and stress. According to Desmond, the disproportionate impact of evictions on poor black women parallels the impact of mass incarceration on black men.

LCBH has been focused on eviction court for many years, including a 2003 report that found the average trial took one minute and 44 seconds. In May, the group launched a data portal that provides community-level detail on evictions.

The group also released a series of reports, showing that eviction filing rates are more than four times higher in black communities than in predominantly white neighborhoods, and that most eviction claims were for relatively small amounts of money, with shortfalls often resulting from short-term crises like health and auto repair expenses.

They also reported that only 11% of tenants were represented in court by attorneys, and not surprisingly, tenants with attorneys received eviction orders significantly less often. And legal aid attorneys outperformed private attorneys, with their clients ending up with eviction orders in only 22% of cases.

Two top-line recommendations from the reports are being implemented. Cook County’s upcoming Regional Assessment of Fair Housing will include evictions as a topic of study, identifying actions to mitigate their effect on segregation. Not only do evictions impact African American families far more often, Swartz said, but eviction records often limit families’ housing options, forcing them to pay more for less desirable housing.

Legislation that would seal eviction filings unless a court order is entered, another recommendation from LCBH, has been introduced in Springfield.

In addition, the Illinois General Assembly increased funding for the state’s Homelessness Prevention Program from $5 million to $9 million. Previously the fund was depleted before the end of the fiscal year, Swartz said. He’d like to see information about the fund, which provides grants to households experiencing temporary crises, available in eviction court — and perhaps included in court summonses.

LCBH has recommended other steps that would help tenants accessing those grants, and others, avoid eviction. According to Swartz, the state or city could extend the time provided for renters to pay back rent before an eviction can be filed — it’s currently just five days — and allow renters to stop an eviction by paying back rent even after an eviction filing.

Swartz said support is growing for another key recommendation: that the state or city allocate funds to guarantee tenants a right to counsel in eviction court. Most tenants don’t understand their rights, whether they have a legal defense in an eviction case, and whether they can get a better deal in a settlement, he said. For example, if a tenant’s best option is to agree to vacate an apartment, there’s no need for an eviction order, which can make it harder to find a new place to live, he said.

Adding impetus to the proposal is the fact that New York City and San Francisco are implementing right to counsel measures, and Philadelphia is considering it.

Like other housing advocates, LCBH also advocates broader-reaching measures that would increase housing options and reduce evictions, including requiring that eviction be for cause and establishing proactive rental inspections and rent control.

But in the meantime, there are fairly simple, immediate steps that can be taken that will help stabilize communities — and help low-income families, instead of driving them deeper into poverty.

Curtis Black is an opinion writer for The Chicago Reporter.

Founded on the heels of the civil rights movement in the 1960s, The Chicago Reporter confronts racial and economic inequality, using the power of investigative journalism. Our mission is national but grounded in Chicago, one of the most segregated cities in the nation and a bellwether for urban policies.

The Reporter is the nation's only nonprofit news organization whose mission is to investigate race. That was true in 1972, and that is still true today. We use data to show how the policies of government and private institutions affect racial inequality, and we hold policymakers accountable. We report from the viewpoint of the people and communities affected by these policies. And we practice journalism that informs change and solutions.

We need your support to continue to produce our trademark, investigative journalism on race, poverty, and income inequality. If you value the work of the Chicago Reporter, make a donation today.