For Warren, a wealth tax is primarily a path to revenue, while Sanders emphasizes reducing the economic power of billionaires as a class 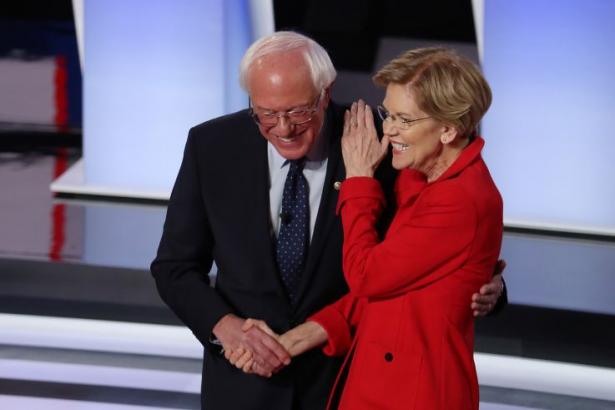 On Tuesday, Senator Bernie Sanders proposed his own wealth tax on millionaires and billionaires, and its objectives highlight the sometimes hard-to-see contrast between Sanders' and Senator Elizabeth Warren's approaches to redressing wealth inequality.

Sanders' new wealth tax would target a larger number of upper class households than Warren's existing plan, and at higher rates. His proposal would impose a 1% tax on net worths over $32 million (and single filers with net worths more than $16 million), affecting 180,000 households. The plan has several brackets, with a 2% tax over $50 million, 3% over $250 million, 4% over $500 million, 5% over $1 billion, all the way up to 8% on net worths over $10 billion.

While both proposals target sprawling wealth inequality, Warren's tax is pitched as a minimum effective dose for generating revenue to be spent on rebuilding the middle class, while the Sanders proposal aims to rein in the billionaire class by cutting in half the wealth held by the typical billionaire over 15 years.

"I don't think that billionaires should exist," Sanders told the New York Times. "I hope the day comes when they don't."

Saez and Zucman tested the taxes retrospectively, analyzing how the richest people in the United States would be affected. In the case of Amazon founder Jeff Bezos, if Warren's wealth tax had been in effect since 1982, Bezos would now be worth $87 billion instead of $160 billion. If Sanders' tax had existed, Bezos would be worth $43 billion. Zucman posted the comparative data for other billionaires on Twitter.

The main difference is that Sanders's wealth tax would tax billionaires more heavily than Warren's.

Rather than reining in billionaires, Warren has placed her emphasis on how a small, targeted tax can produce substantial benefits.

"Universal pre-k for every three year old and four year old in this country — two cents! Raise the wages of every child-care worker and preschool teacher in this country — two cents! We can do all of that, and we can make technical school, community college, and four-year college free for everyone who wants an education — two cents!" Warren said in a September speech in New Hampshire.Like Warren, Sanders would use the resulting revenue windfall on progressive priorities, including his recently announced housing plan, which proposes to establish national rent control, build 7.4 million affordable housing units and end homelessness. Other Sanders policies, including a soon-to-be-announced plan for universal child care and his signature issue, "Medicare for All," would also use money generated by the proposed tax on wealth.

While Warren has emphasized how a small, targeted tax can fund progressive priorities and Sanders has leaned more into closing the immense gap in wealth growth between billionaires and the average American household, both are relatively radical proposals within the American tax system.

Sanders has previously pitched wealth taxes, including in the run-up to his 2016 Democratic primary campaign, but prior proposals have typically centered around expanding the estate tax on inheritance. Still, a direct tax on net worth isn't without precedent—both proposed wealth taxes have been compared to the property tax that acts much the same way for middle-income households.

While both Sanders and Warren would use the resulting tax revenue to fund their progressive priorities, the Sanders wealth tax is also designed to cut back the wealth growth of billionaires to the same rate as the average American household.

For Warren, a wealth tax is primarily a path to revenue, while Sanders emphasizes reducing the economic power of billionaires as a class.