The Left Needs to Seize Impeachment From Centrist Elites

Impeachment should be about how an oligarch debauched democracy, not about a president clashing with the national security establishment. 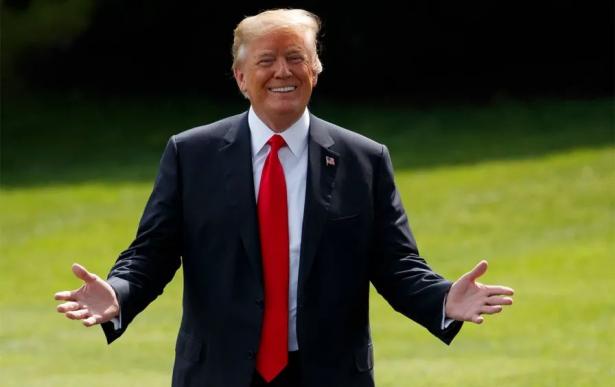 President Trump talks with the press on his way to Marine One in 2018. , AP / Evan Vucci

Donald Trump will almost certainly be impeached in the next few months—but not everyone on the left is happy about it. The trigger for the impeachment is Trump’s pressuring of the Ukrainian government to uncover, or possibly fabricate, dirt on former vice president Joe Biden. It’s this origin that gives some on the left pause.

Ukrainegate is in many ways a reprise of Russiagate, as Trump himself made clear in his now-notorious July 25 phone call with Ukrainian president President Volodymyr Zelensky when the American leader referenced both Hillary Clinton’s e-mail server (alluding to a bizarre theory that it is being kept in Ukraine) and the Mueller report. Earlier, Trump had tried to squeeze information from the Ukrainian governmentthat he thought would make it easier to pardon his convicted campaign manager Paul Manafort. Trump’s fixation on Ukraine seems to be payback for what he regards as the misdeeds of his enemies in Russiagate.

For skeptics on the left, both Russiagate and Ukrainegate serve the interests of a national security establishment seeking to punish Trump for his foreign policy heterodoxy. Centrist Democrats and Never Trump Republicans are united in their belief that Trump’s overtures to Vladimir Putin’s Russia represent a national security threat. The Trump administration has suffered internal strife from national security insiders trying to undermine Trump’s policy preferences in Eastern Europe. The whistle-blower in Ukrainegate is a CIA officer.

Given the genealogy of the two scandals, the question is whether to pursue impeachment against Trump on grounds that will strengthen the national security establishment. As Princeton historian Matt Karp tweeted, “Just in structural terms, the politics of impeachment bend—almost inevitably—toward an alliance between official progressives and Never Trump elites.”

Writing in The Guardian, Yale law professor Samuel Moyn provided a fleshed-out version of this argument. “For liberal and conservative centrists, inured to taking turns in power for decades, Trump’s rise in the Republican party and his success in beating Hillary Clinton within the appalling rules of the American game was the real affront,” Moyn argues. “Centrists simply want to return to the status quo interrupted by Trump, their reputations laundered by their courageous opposition to his mercurial reign, and their policies restored to credibility.”

Karp and Moyn are shrewd in pointing out that the dominant framework in which impeachment is being presented is a centrist national security narrative, with Trump’s great sin being his defiance of the intelligence community. But that is not the only narrative that can be used to argue for impeachment.

There is no reason the rising left in the Democratic party should cede popular anti-Trump sentiment to centrist Democrats and Never Trump Republicans. As Moyn notes, “Leftwing members of Congress such as Alexandria Ocasio-Cortez and Bernie Sanders have long been in favour of impeaching Trump.” He could add Rashida Tlaib to the list, since she uttered the legendary war cry, “We’re going to impeach this motherfucker!” There’s also Elizabeth Warren. Her rising poll numbers in the Democratic primaries certainly owe something to the fact that since the release of the Mueller report she’s become perhaps the most insistent Democratic voice on behalf of impeachment.

What Ocasio-Cortez, Sanders, Tlaib, and Warren realize is that Donald Trump is profoundly loathed by ordinary Democrats, who want to see their party fight back against this racist buffoon. One might object that for the left there are better impeachment fights that could be waged: Imagine Trump being impeached for his many sexual harassment allegations—or for his corrupt business deals. But in politics as in law, you have to go with the case that can win, not the case you’d like to have. Just as Al Capone had to be brought down for tax evasion rather than murder, it’s easier to impeach Trump for Ukrainegate than his many other, and much more serious, crimes.

Fortunately, Ukrainegate offers the left much to work with. As against the centrist narrative of national security misconduct, the left should be arguing that this is a perfect example of how the imperial presidency endangers democracy. Trump is treating the presidency as his personal fiefdom, using his office to punish his political enemies. He has been able to get away with it because Congress has, since the early days of the Cold War, abandoned its oversight powers over foreign policy. (There was a brief resurgence of congressional oversight after Watergate, but that quickly faded.)

It’s telling that Trump’s defenders, no less than his critics, make a national security case. The New York Times, to its discredit, gave space to John Yoo, the infamous apologist for torture in the George W. Bush administration, to argue that impeaching Trump was a national security risk. Yoo claimed that “rushing into an impeachment may do long-term harm to the presidency and our national security.” Yoo added: “The Constitution vests the president with the authority to conduct foreign policy and the responsibility to protect the nation’s security. A president, even one who is possibly engaging in wrongdoing, must have confidence in the confidentiality of his communications or he will be unable to perform his constitutional duties and our international relations will fall victim to government by committee.”

This is precisely the argument the left has to combat. The Constitution, contra Yoo, vests Congress with substantial powers over foreign policy, including the decision to declare war and to impeach over presidential misconduct.

SUPPORT PROGRESSIVE JOURNALISM If you like this article, please give today to help fund The Nation’s work.

Trump is a great gift and opportunity for the left precisely because he illustrates the decadence and corruption of the imperial presidency much more clearly than earlier and more sober presidents. The New York Times reported on Thursday that in a private meeting Trump fantasized about executing the White House source who fed information to the whistle-blower in this case. “I want to know who’s the person who gave the whistle-blower the information because that’s close to a spy,” Trump told his advisers. “You know what we used to do in the old days when we were smart with spies and treason, right? We used to handle it a little differently than we do now.”

The question the left needs to highlight is whether Americans want to continue vesting the presidency with all the terrible powers of surveillance and death when the office could easily fall into the hands of a deranged figure like Trump.

Beyond the need to roll back the imperial presidency, impeaching Trump allows Democratic presidential hopefuls to make Trump’s corruption a 2020 campaign issue. Again, this can be done in ways that are perfectly consistent with left-wing values. After all, Trump embodies not just the vices of one man but an entire system where the rich often seem to live outside the law. Elizabeth Warren, for one, seems to be preparing an argument that presents Trump’s sundry transgressions as symptomatic of a rigged system. Bernie Sanders could easily do the same.

The devil shouldn’t have all the best tunes. Nor should national security centrists be the only ones who get to enjoy impeachment.

Jeet Heer is a national affairs correspondent at The Nation and the author of In Love with Art: Francoise Mouly’s Adventures in Comics with Art Spiegelman (2013) and Sweet Lechery: Reviews, Essays and Profiles (2014).

View the current issue of The Nation

Subscribe to The Nation today and Save up to $129.