A coalition of labor and civil rights activists recently demonstrated in New York City to call for an end to pay discrimination against Emergency Medical Service workers. 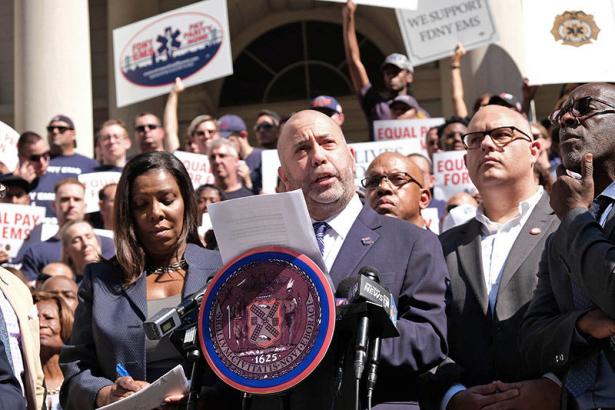 Several hundred members of District Council 37’s Emergency Medical Service Locals 2507 and 3621 were joined on the steps of City Hall by dozens of state and local elected officials at a Sept. 25 rally demanding pay parity with other first-responders.

The firefighting side of the FDNY is 78 percent white and over 99 percent male. By contrast, EMS is made up predominantly of people of color with 28 percent Hispanic, 21 percent black and 5 percent Asian. Close to a third are female.

EMS starting salaries are several thousand dollars below those for the other uniformed services. The contrast that’s the greatest irritant exists between EMS workers and Firefighters. After 5 1/2 years, maximum EMS pay is $50,604 compared to a Firefighter maximum of $85,292.

Also present at the rally were representatives of several other unions, civil-rights organizations and members of the clergy who cast the long-standing pay disparity as municipally sanctioned race and gender discrimination.

Hazel N. Dukes, president of the NAACP New York State Conference, said, “The de Blasio administration has stated that FDNY EMS jobs are ‘different’ from Firefighters, defending the difference in salary. Despite responding to 80 percent of 1.8 million calls received by FDNY last year, they receive $8,000 less in starting salary than other first-responders; a gap that becomes wider by tens of thousands of dollars after five years of service. This is a substantial injustice and a violation of FDNY EMS workers’ civil rights.”

“No Administration has done more to bring workers to the table,” the Mayor’s press office responded in a statement. “The work of our Emergency Medical Service professionals is crucial to the safety of New Yorkers and we are proud of all that they do.”

The de Blasio administration estimates it would cost $450 million a year for EMS parity.

Back in January, as the EMS unions were hoping to start contract negotiations, Mayor de Blasio contended that the vast gap between top salary for the other jobs and EMS pay existed because their “work is different.”

The contracts for both EMS locals expired June 28, 2018. The unions say there have been no talks.

That action came in the wake of successful discrimination lawsuits brought by the Vulcan Society—the FDNY’s African-American fraternal group—and Communication Workers of America Local 1180, which represents the city’s Administrative Managers.

“We are here to take care of unfinished business,” State Attorney General Letitia James told the large crowd. “So, for decades, women and men who risk their lives to save everybody have been fighting for equal pay and benefits. They are truly the first-responders."

In 2016, while Public Advocate she used data from the Office of Payroll Administration to determine that when it came to gender pay disparity, there was an annual $5.6-billion gap between what female city workers made and their male counterparts across all city agencies.

Ms. James invoked the memory of Paramedic Yadira Arroyo, who was killed in the line of duty in March 2017 when a homeless man with mental-health issues and a lengthy criminal record hijacked her ambulance.

“She was a single mother of five who two years ago, while working overtime, was killed when a career criminal stole her ambulance and ran over her,” Ms. James said. “We are standing here in her honor….Her pay was so low she, like so many EMS workers, had to work very hard and work overtime under extremely stressful and dangerous conditions, and that is not right. Equal pay for equal work is a basic human right.”

‘All of You Equal’

City Comptroller Scott Stringer noted his 85-year-old mother recently suffered a serious heart attack and had her life saved by EMS workers. “There is no question in the minds of New Yorkers that all emergency services are equal,” he told the crowd.

FDNY Paramedic Crystal Cadet, who was featured in a New York Times editorial Sept. 22 calling for EMS pay parity, told the crowd she was “hurt and confused” by Mr. de Blasio’s remarks that ranked her work as beneath that of Firefighters.

“I work shoulder to shoulder with my brothers and sisters who are police officers and firefighters,” she said. “I am spit on, attacked by patients, exposed to infectious pathogens and other life-threatening diseases.”

She continued, “I am required to go into unsafe buildings, into homes where there is domestic violence and yes, as a paramedic I even go into burning buildings. I have gone into a burning building to save the life of a Firefighter who was injured and needed medical assistance. So, please don’t say I am worth less.”

District Council 37 Executive Director Henry Garrido, long an ally of Mayor de Blasio, called on him to make EMS pay parity a priority. “If you care about equal pay, you have to make sure the funding is there for equal pay,” he said. “So, no more press conferences. No more press releases. No more pontificating on what you believe in Iowa and Kentucky.”

He continued, “What about right here in New York? What about us? Enough is enough.”

“Our members put their lives on the line every day to protect New Yorkers just like every other first-responder,” said Local 2507 President Oren Barzilay. “They should not have to sue the City of New York just to receive the equal pay and benefits they have earned and that they deserve.”

“The biggest ‘difference’ between our members and other first-responders is the color of their skin,” said Local 3621 President Vincent Variale. “The ‘it’s different’ argument has been used for decades to justify discriminatory treatment in this country. The City of New York needs to do better in 2019.”

“Discrimination affects all EMS personnel at all levels within the Department,” said Joseph Pataky, the president of the EMS Superior Officers Association. “While some are hurt more than others, diminishing the respect and value given to the bureau as a whole hurts all of our members, from entry level to deputy chiefs.”

EMS union officials have long complained that the vast disparity encourages EMS members to stay just the minimum two-year period and then try to get “promoted” to Firefighter jobs.

As a consequence, according to the City Council, close to 1,000 EMS members have left the job over the last 12 months, with 80 percent of new EMS hires leaving within four years. According to emergency-medicine research, it takes roughly six years to master the position.

“Unfortunately, we are gathered here today because the city has devalued the work and performances of our first-responders, the EMS of the FDNY,” said Council Member I. Daneek Miller, who chairs the Civil Service and Labor Committee. “These brave first-responders have been shot, they have been assaulted but they continue to run into buildings, and unfortunately they have also given their lives.”

“Every single day when that call comes, no matter if it is a sunny beautiful day at the beginning of fall or there is a blizzard going on outside, or we suffer the most significant terrorist attack in the history of the United States not far from here, EMS workers respond to that call just like police officers, just like firefighters,” said Council Speaker Cory Johnson.

Emergency-medical workers from as far away as California and Texas made the trip to support the drive for pay parity.