Technology and ride-hailing workers embrace lessons from a book based on ideas associated with a labor group, the IWW, from the early 20th century. The book has provided a blueprint for organizing collective power without a formal union. 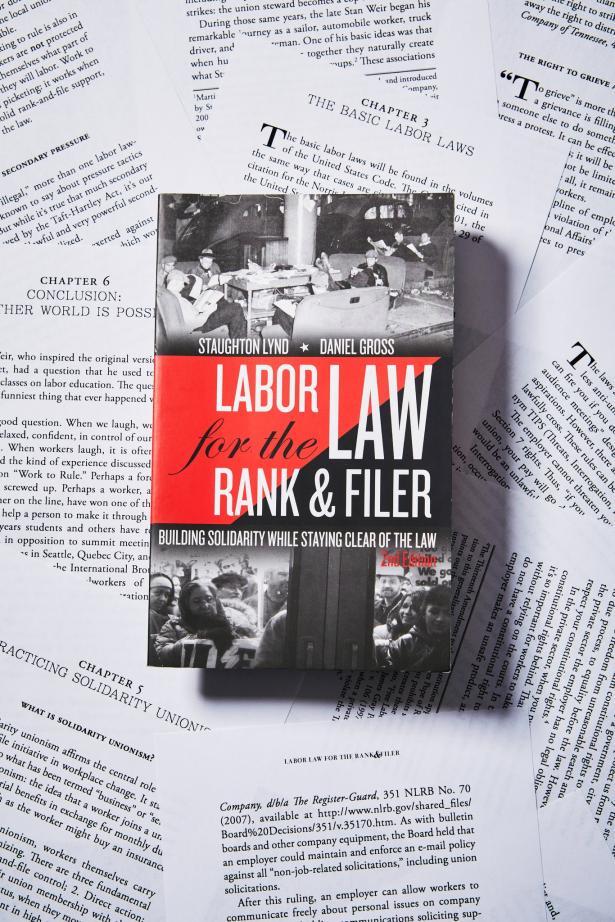 A recent edition of “Labor Law for the Rank and Filer,” a book offering guidance for workers seeking to organize. It has become influential in the technology and ride-hailing industries. , Kelly Marshall for the New York Times

Just before 20,000 Google employees left their desks last fall to protest the company’s handling of sexual harassment, a debate broke out among the hundreds of workers involved in formulating a list of demands.

Some workers argued that they could win fairer pay policies and a full accounting of harassment claims by filing lawsuits or seeking to unionize.

But the argument that gained the upper hand, especially as the debate escalated in the weeks after the walkout, held that those approaches would be futile, according to two people involved. Those who felt this way contended that only a less formal, worker-led organization could succeed, by waging mass resistance or implicitly threatening to do so.

This view, based on century-old ideas, did not emerge in a vacuum. It can be traced in part to a book called “Labor Law for the Rank and Filer,” which many Googlers had read and discussed.

Its authors are a longtime labor historian, Staughton Lynd, and an organizer, Daniel Gross. They identify with a strain of unionism popularized in the early 1900s by the Industrial Workers of the World, a radical labor group known as the Wobblies that defined itself in opposition to mainstream trade unions.

The book has been “incredibly helpful in thinking through options for action, ways of building collective power, and giving workers who often aren’t familiar with labor law some working knowledge that can guide decision making,” said Meredith Whittaker, a leader of the walkout who left Google in July after more than a dozen years at the company.

And Googlers aren’t the only ones who have drawn inspiration from the book. Workers at the crowdfunding company Kickstarter, the site of a recent union campaign, have studied it. Organizers with one of the largest Uber driver groups say the ideas have influenced them as well.

Ares Geovanos, a longtime volunteer for the Tech Workers Coalition, which seeks to organize workers across the industry, said the book’s key contention — that a dedicated group of employees can accomplish more through actions like strikes than by formal efforts to certify a union — had gained traction partly because it reflects reality: Most tech workers have traditionally been reluctant to organize.

“A lot of the struggles will necessarily be with a strong minority due to the narratives around working in the industry and ideological baggage of the work force,” Mr. Geovanos said by email. He said he first stumbled across “Labor Law for the Rank and Filer” while searching online for a do-it-yourself guide to organizing. His group later led training sessions based on the book that Google workers attended.

Mr. Lynd and Mr. Gross lay out a practical guide for staging a kind of workplace revolution that upends the balance of power between management and labor.

They explain, for example, when striking workers enjoy strong legal protections (in taking aim at unfair labor practices like retaliation) and when they are more exposed (in strikes focused strictly on economic demands). They discuss the circumstances under which workers can take their concerns to the media, such as a news conference in which coffee shop employees disclosed evidence of rat and insect infestations.

But more broadly, the book serves as a polemic contrasting mainstream “business unions” with what the Wobblies refer to as “solidarity unions” — that is, worker-led groups that are not typically certified as exclusive bargaining agents under federal law and therefore don’t need to win majority support to exist.

The business union “is controlled from the top down by officers and staff (usually white males) who are not regularly employed at the workplace,” Mr. Lynd and Mr. Gross write. They complain that a business union is preoccupied with achieving a bargaining agreement that requires workers to give up the right to strike and any say in the company’s major decisions.

When there is trouble at the workplace, they write, “the union member calls a steward or business agent and hopes that some bureaucratic process disconnected from the rank and file will right the wrong.”

In a solidarity union, by contrast, the workers “decide together on a course of direct action to right the wrong, which the workers will lead.” Solidarity unions may seek written agreements with management, but they are loath to make them overly comprehensive, at the risk of letting management get too comfortable.

Mr. Lynd, who will turn 90 in November, is something of a Forrest Gump figure in progressive politics. He taught history at Spelman College in Atlanta in the early 1960s and served as director of the Freedom Schools program in Mississippi, which brought activists from around the country to help teach and organize African-American students.

He joined the Yale faculty in 1964 but found himself without tenure prospects after making a trip to Hanoi with the antiwar activist Tom Hayden during the Vietnam War.

He and his wife, Alice, moved to Chicago, but he struggled to land another faculty position. “I was kicked out of academia,” Mr. Lynd said. They took jobs with the organizer Saul Alinsky, and Mr. Lynd later attended law school there. In the mid-1970s they moved to the Youngstown, Ohio, area, where Mr. Lynd represented workers and later prisoners, and have lived there ever since. Mr. Lynd’s first edition of “Labor Law for the Rank and Filer” was published in 1978.

In the early 2000s, he met Mr. Gross, nearly 50 years his junior, during a trip to Brooklyn for a conference. They stayed in touch after Mr. Gross went to work at Starbucks, where he was fired in 2006 while helping to lead a solidarity union that he co-founded, the IWW Starbucks Workers Union.

“I was an all-star barista, and all of a sudden they thought I forgot how to make a cup of coffee,” Mr. Gross said. Starbucks declined to comment for this article, but said at the time that Mr. Gross had been fired for an inappropriate remark to a manager. Mr. Gross said the remark was a simple plea not to fire a colleague.

Mr. Gross, who later graduated from Fordham Law School, prefers unpretentious professional titles. More than once in our conversation he used “fellow worker” as an honorific, as someone might use “doctor” or “professor.” “Fellow Worker Little was another martyr in the copper industry,” he said, alluding to Frank Little, a revered organizer in the Wobblies’ heyday.

Since law school, Mr. Gross has led Brandworkers, a group that organizes employees in the specialty food-making business. On a Saturday in August, he joined workers in leafleting outside a Manhattan cafe over its patronage of a bakery that the group accuses of hurting workers by mishandling an immigration audit.

Mr. Gross collaborated on a revised edition of “Labor Law for the Rank and Filer” with Mr. Lynd in 2008, with an update in 2011. About three years ago, Mr. Geovanos of the Tech Workers Coalition came across the book, and the group incorporated it into a seminar that became the basis of a standard training session.

Mr. Geovanos said tech workers were quick to absorb the book’s lessons. “We do breakout exercises and scenarios based on the material so I get to see people apply the learnings immediately,” he said by email.

While applauding the grass-roots organizing that the book has helped inspire, union leaders have cautioned that solidarity unions can be exhausting for workers to sustain and that they leave workers vulnerable to company retaliation. “You don’t have the law behind you to protect you like you would if you have recognized agents like a union,” Liz Shuler, the secretary-treasurer of the A.F.L.-C.I.O., said in an interview.

But many Google activists have come to share Mr. Lynd’s and Mr. Gross’s ambivalence about traditional unions. “They can work for some workers, but we need to be thinking about the organizational form we’re adopting and how to build power for the long run,” Ms. Whittaker said.

Ivan Pardo, a leader of Rideshare Drivers United, a group representing more than 5,000 Uber and Lyft drivers in Southern California, said the views of Mr. Gross, with whom he speaks regularly, “definitely pervaded the way I think.”

Mr. Pardo’s group has criticized efforts by mainstream unions to broker a deal with Uber and Lyft that would allow drivers to organize but could require them to give up other rights. He said Mr. Gross had helped give him confidence that drivers could have influence by building their own organization and striking and protesting rather than making such concessions.

Mr. Gross sees a key advantage of the solidarity model in some of the recent successes by nonunionized workers. The need to win a majority of workers, typically in a secret ballot election, makes formally certified unions relatively easy to resist, he said. If a company hangs on through the election, union organizers often pack up and leave.

But solidarity unions can challenge employers for years without an election. “What Uber and Lyft workers are doing, what tech workers are doing, game workers,” he said, “it’s very resilient and robust and very difficult to stamp out. There’s no institution that’s going to call it quits one day.”