Left Organizers Should Join the Fight for Impeachment

As Congress returns to Washington, the impeachment proceedings are likely to gain steam. The authors argue the left can't afford to sit this fight out, but should be a part of the broad anti-Trump front working to protect and expand democracy. 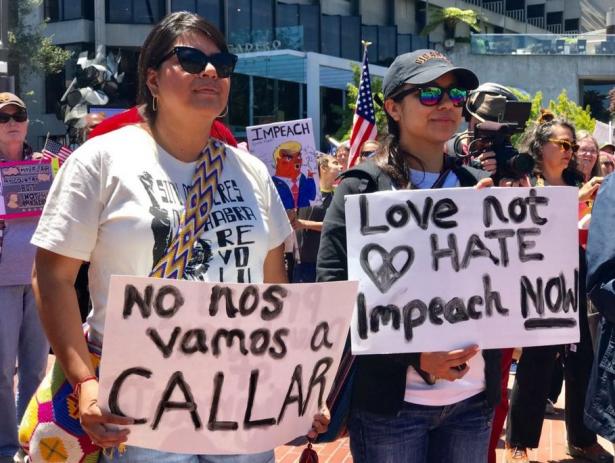 While socialists and progressives were early advocates for impeachment, left organizers have been recently out-paced by the rapid developments in the House, driven primarily the Democrat’s centrist leadership, Nancy Pelosi and Adam Schiff.

We believe that left organizers cannot afford to sit out the struggle for impeachment. Far from being a sideshow, demonstrating leadership in a broad anti-Trump front is essential to any effort to win governing power and advance a structural reform agenda.

To that end, we offer five strategic considerations for left organizers contemplating impeachment and the broader political moment.

1. The impeachment fight is key in the struggle against authoritarianism and toward democracy.

The Trump administration’s corrupt political and financial entanglements in Ukraine and their refusal to comply with the impeachment process represent an effort to consolidate even more expansive, undemocratic executive powers. Trump’s broad assault on democracy is part of ongoing Republican shift towards authoritarian rule.

The Administration’s wholesale refusal to acknowledge the House’s authority as an oversight body make perilously clear the gravity of an “imperial presidency” and the continued threats it could pose as it pushes against legal constraints to attack immigrants, Muslims, LGBTQ people, and other working class communities.

While it remains an outside possibility, even mainstream commentators are beginning to wonder if this signals trouble for a peaceful transition of power in 2020. A formal, military or state-backed coup appears extremely unlikely, but it is not difficult to imagine that a thwarted Trump could encourage his supporters to engage in acts of non-state-sanctioned political violence, something he has done both tacitly and sometimes openly before.

Although it is understandable that some strands of the left and the anti-Trump resistance feel fatigued and powerless in the face of Trump’s continued efforts to push the boundaries of an already deeply flawed democratic system, left organizers cannot afford to ignore the continued efforts to erode, rather than expand, democracy. Doing so only provides proof positive of the idea that Trump is testing; namely, that he “can do whatever [he] wants.”

2. An adequate assessment of the balance of forces requires properly weighing efforts to defeat corporate and centrist democrats with defeating the authoritarian right.

Many of the arguments against engaging in the fight for impeachment, including from Samuel Moyn and the Democratic Socialists of America, appear to equate the threat from the neoliberal center with the threat from an uninhibited, authoritarian right. But while Nancy Pelosi and Donald Trump both belong to the ruling class, they are not the same — nor are Joe Biden and Donald Trump for that matter — and they do not pose equal threats to the left’s aspirations for deep democracy.

As we’ve argued above, the threat posed by Trump and the authoritarian Republican Party endangers even the limited and deeply flawed democratic system we currently operate within. Progressives, unions, and left organizers must participate in a popular front that includes people with whom we vehemently disagree — be it centrist Democrats, Republicans, corporate leaders, and even national security state actors — to stop the rollback of existing democratic safeguards. The term “popular front” stems from the 1930s strategy in Europe that included a left united front but reached out to all sectors of society to unite them in the fight against fascism.

Of course, left organizers are engaged in a two-front battle. Joining that popular front needn’t mean abandoning the struggle against neoliberal centrists in the Democratic Party, who seek to restore the status quo ante. We firmly believe that building political power to defeat these centrists in the Democratic presidential primary is crucial, not only because they do not share our political vision, but also because they are ill-equipped to energize the electorate and defeat Donald Trump. For this reason, we think capable of ensuring that one of the two progressives in the race — Bernie Sanders or Elizabeth Warren — win the primary.

Nevertheless, it is dangerous to think that the threat posed by centrists and the authoritarian right is somehow the same. While centrist efforts to restore the status quo would almost certainly be unstable, progressives and the left can’t leapfrog over the near-term goal of protecting the existing democratic system, which is required to safeguard the success of our electoral efforts in 2020 and place a check on efforts by Trump and the Republican Party to govern with impunity.

3. In order to build toward governing power, left organizers must demonstrate leadership in key democracy fights that threaten a shift toward authoritarianism.

As with the Mueller investigation, left organizers would do well to see these recent developments as an organizing opportunity. Growing portions of the electorate support impeachment. Even a new poll from Fox News shows a slim majority are in favor of Trump’s impeachment and removal. And the continuous stream of testimonies, documents, and statements by political leaders means that impeachment will continue to be at the center of media attention, whether progressives attempt to shape the narratives at the center of all that coverage or not.

Although many Americans are likely outraged by the latest revelations, centrist Democrats are unlikely to mobilize or engage the broader public, instead focusing on a narrow inside-the-beltway strategy. The Puerto Rican Summer, of course, presents an alternative, where mass mobilizations transformed> a set of leaked texts into a referendum on political elites, the fiscal control board (“La Junta”), the debt crisis, recovery from Hurricane Maria, U.S. colonialism, and sexism. Although there has been a significant demobilization of the “resistance” taking street action after the summer of 2018, likely because much of our energy has been focused on electoral work, the impeachment hearings hold the potential to reactivate public outrage at Trump’s manifest self-dealing, corruption, cruelty, and lawlessness.

Of course, the ultimate success of the impeachment process is uncertain. While it is unlikely that 67 Senators would support Trump’s removal from office, it is not impossible. Republican Senators, including Mitch McConnell (who is up for re-election in 2020), must be pushed to hold a full trial and stand up for democracy. There are some reasons to believe that McConnell could be moved given his original statement that by law the Senate would have to take up the impeachment process. He also recently backed down from blocking election security funding after being named “Moscow Mitch.”

Regardless of whether or not Trump is ultimately removed from office, now that impeachment proceedings have begun, we must join a popular front to fragment the Republican governing coalition and weaken Trump’s political standing. By joining the fray, left organizers have an opportunity to demonstrate leadership inside of a popular front, recruit new members, and raise political consciousness of the fact that the current political crisis goes far deeper than the high crimes and misdemeanors of the president.

4. As left organizers, we can play a special role in amplifying narratives around democracy and the fact that the capitalist class stands in the way of government of, by, and for working people.

In the current stage, we need to be pushing the ideological fight for upholding and expanding democracy while pushing back on the idea that rich people can do whatever they want, in or out of government.

The latest revelations by the whistle-blower demonstrate Donald Trump’s continued use of the federal government as a tool for his own political and financial gain. This is of a piece with an administration packed with bankers, oil executives, and lobbyists hollowing out government to serve their own financial interests. Trump’s refusal to cooperate with the impeachment hearing exemplifies the way that rich elites believe they can act with impunity, whether that means running government for their own profit, violating international law by detaining children and turning away asylum seekers, trampling on the First Amendment by discriminating against Muslims, rolling back women’s and LGBTQ rights while assulting women, and disenfranchising People of Color and Native peoples.

From a narrative standpoint, there is certainly a danger here of spending too much time and energy emphasizing what we’re against, instead of what we’re fighting for. But progressives and left organizers are actually making significant headway when it comes to painting a picture of the sweeping non-reformist reforms needed to create a government of, by, and for working people. At a time of both great opportunity and great danger, we must balance narratives that speak to people’s hopes and aspirations with those that activate their fear and anger.

5. As left organizers, we can’t afford to neglect mass mobilization and direct action in favor of an exclusively electoral strategy during a moment when democracy is at risk. Our leadership in the streets can position us as key players in a broad front not only to protect, but to deepen and expand democracy.

We need a movement ecosystem that is able to struggle on many fronts with coordinated efforts. Electoral strategies, where we are speaking with millions of people at the door or on the phone, are key in shifting the political terrain and can work in tandem with shaping public narratives, making meaning of our conditions, and translating the values we are upholding into courage to take action. Most grassroots electoral organizing groups will be planning to expand their scale of reach in 2020 and beyond with little resources to meet that expansion.

While we think electoral efforts are key, we need to avoid falling into the pattern of 2008, where mass movements became demobilized. We need to keep flexing the muscle of large-scale actions with left-led demands and narratives whatever possible outcome of 2020, namely: Trump winning, a neoliberal Democrat winning, a progressive Democrat winning, or Trump losing but refusing to leave office.

In all of these scenarios, we will still require powerful movement mobilizations to hold public narratives and push politicians to do the right thing or stop a would-be dictator in the latter scenario. If stone-walling Congress and claiming immunity is a trial balloon for Trump refusing to leave office or consolidating authoritarian power, we need to start now to prepare for this scenario. Even if there is a sweeping progressive victory in 2020, mass mobilization and direct action in concert with legislative and electoral fights will be essential to achieving any kind of structural reform.

[Claire Tran (they / she pronouns) is a strategist with a background in integrated voter engagement, community organizing, training, and facilitation with organizations including AAPIs for Civic Empowerment Education Fund (AAPI FORCE-EF), URGE: Unite for Reproductive & Gender Equity, SOUL: School of Unity & Liberation, New Virginia Majority, and the Right to the City Alliance. Claire currently works for the State Power Caucus. Jacob Swenson-Lengyel (he/him) is an organizer and strategist with a background in social movement communications. He has worked for People’s Action and Interfaith Worker Justice and is currently a Program Manager at Narrative Initiative. He was one of the founding members of The People’s Lobby in Chicago and he served as the membership coordinator for Graduate Students United at University of Chicago. Claire and Jacob are both members of the Organizing Upgrade Editorial Collective.]