The Republicans Sink Even Lower: Matt Gaetz’s Stunt Outside the SCIF is Despicable and Dangerous 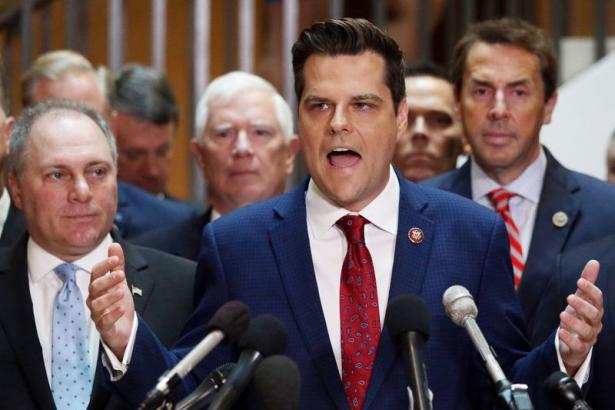 a pro-Trump mouthpiece most notable for pushing “deep state” conspiracy theories on Fox News and not studying his Bible, has sought to undermine the legitimacy of House Intelligence Committee Chairman Adam Schiff’s investigations into Trump since the earliest days of the Mueller investigation.

In a bizarre press conference this morning, Gaetz and a motley gang of Trump ultras and Freedom Caucus members decided to storm the Sensitive Compartmentalized Information Facility (or SCIF) where Schiff was conducting a classified deposition related to the ongoing House impeachment inquiry. There was no time to waste, Gaetz claimed. Conspiracies were afoot!

In an America with healthy institutions, the very suggestion of raiding a secure facility would be met with condemnation. Actually going through with such a misguided plot would merit an immediate ethics investigation and censure by the full House.

This is not an America with healthy institutions.

Not only did Gaetz and his mob successfully force their way into the SCIF — causing an uproar from members of Congress actually authorized to attend the hearing — they proceeded to spend the afternoon making political hay of their imaginary coup. Some brought cell phones into the facility, something expressly prohibited by national security protocols. Others ordered pizza. Gaetz, in true Trumpian fashion, took the opportunity to tweet.

“Anything that transmits and can record video or audio is specifically forbidden,” Jamali continued. “If you break these rules, you might as well drop the “S” (secure) in SCIF.”

The abandonment of sensitive intelligence protocols isn’t just a disgrace for Gaetz, who likely only cares that his misadventure will get top billing on Fox News tonight. It’s a disgrace to a Republican Party that once put national security — or at least performative deference to national security — at the heart of its political self-identity.

SCIFs are one of the most visible symbols of a powerful idea: that some things, like national security briefings and sensitive intelligence operations, are simply too important for partisan games. Democrats and Republicans have disagreed in the past on the goals and methods behind American intelligence operations. None have ever gone so far as to discard security protocol entirely, as Gaetz and the Freedom Caucus did today.

That’s because Gaetz and his ilk aren’t really interested in the nuts-and-bolts of being legislators. They have no patience for boring national security briefings and the reams of guidelines and rules that enforce secrecy on members of Congress. For Gaetz and Trumpist Republicans, being a congressman is about attention-grabbing public performance.

Everything must please the boss.

Gaetz makes the laughable claim that Republicans are being excluded from impeachment inquiry depositions like the one his mob compromised today. That is categorically false: Republican members of the House Intelligence and Oversight Committees were in attendance for today’s deposition. Gaetz’s gripe is that those Republicans were unwilling to turn a serious intelligence hearing into a media circus.

This act of reckless political theater comes with real costs. Politico’s Kyle Cheney noted that police responsible for ensuring the integrity of the SCIF were forced to conduct extensive security sweeps after Gaetz and his gang broke in. It turns out there are good reasons legislators haven’t been tweeting from inside supposedly secure, locked-down facilities.

House Democrats are hesitant to launch an ethics hearing into Gaetz’s clearly unethical behavior, for fear such a hearing would play into Gaetz’s persecution complex. The severity of the situation demands not only a full investigation, but punishment for those who knowingly violated the fundamental guidelines governing American national security.

Appeasing such breathtakingly unethical behavior only invites further abuses of power, especially from Trumpists who are sure to receive a pat on the back from Trump for their misconduct. Elected officials sing paeans to national security while on the campaign trail; they must be equally willing to defend it from direct assaults by their colleagues.

[Max Burns is a veteran Democratic strategist and senior contributor at Millennial Politics. He regularly makes appearances on Fox News, Fox Business, and Bloomberg Radio. Follow him on Twitter @TheMaxBurns]