A review of the first English-language biography of one of Latin America’s most important, innovative, and enduringly relevant, Marxist thinkers. 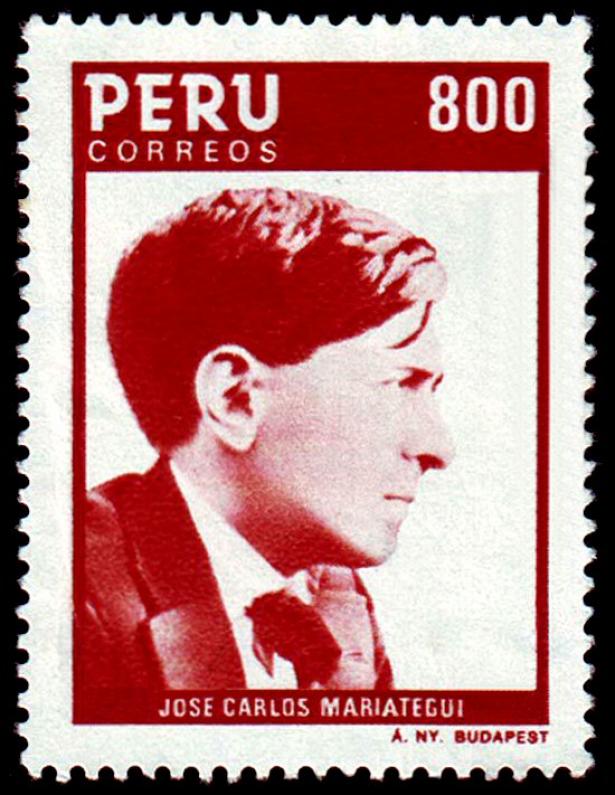 We certainly do not wish for socialism in America to be an exact copy of others’ socialism. It must be a heroic creation. We must bring Indo-American socialism to life with our own reality, in our own language. This is a mission worthy of a new generation.

Jose Carlos Mariategui, widely regarded as the pioneer of Marxism in Latin America, enjoyed a renaissance with the rise of the region’s “Pink Tide” of leftist governments in the 1990s and 2000s. Yet outside of Latin America, he remains relatively unknown.

Orthodox Marxists targeted Mariategui (1894-1930) for supposedly embracing nationalism and failing to accept the primacy of class over race--charges his supporters argue lack nuance and exhibit an unwillingness to account for the particular social, cultural and economic conditions of Peru and the rest of Latin America.

The need to shatter this misreading and to recognize Mariategui’s contributions to Marxist literature and today’s socialist challenge is one reason to welcomethis year’s publication “In the Red Corner: The Marxism of Jose Carlos Mariategui” (Haymarket Books) by Mike Gonzalez, an emeritus professor Latin American studies at the University of Glasgow.

“The Stalinist assault on his ideas, and his systematic discrediting by the Comintern, consigned Mariategui to the shadows for a while, but in the glaring light of the collapse of ‘actually existing socialism,’ Mariategui has reemerged,” Gonzalez writes.

For certain, Mariategui’s willingness to mix Marxism with Peruvian indigenismo--while incorporating such notions as faith and revolutionary myth into his analysis--places him outside the mainstream. But his insistence on highlighting those themes and others, such as, like Antonio Gramsci, incorporating the importance of culture into his analysis, is what makes his analysis so rich.

“In the Red Corner” traces how Mariategui laid the foundation for many of the intellectual and political currents—not just the Pink Tide but also dependency theory, colonial theory, liberation theology, Third World liberation struggles, and the Zapatista uprising in Mexico—that followed him.In “The Theology of Liberation,” Peruvian theologian Gustavo Gutierrez, the founder of the current of religious thought that draws from Marxist economic and social analysis, praises Mariategui for offering “a method for the historic interpretation of society.”

A Self-Taught and Anti-Academic Intellectual

Mariategui spent his childhood in poverty the capital of Peru, Lima. His aristocratic father abandoned the family when he was a boy. That left his mother, who came from the highlands, to support the children while working as a seamstress.

Crippled in one leg, Mariategui suffered from poor health and was unable to study beyond primary school. He liked to describe himself as not only “self-taught” but also “anti-academic.”

When he was 14, Mariategui found a job as a linotype assistant and proofreader at the newspaper La Prensa in Lima. From there, he worked his way up the ranks in the journalism world, eventually editing a number of publications and becoming well known in Lima’s literary community.

“In the Red Corner” closely examines Mariategui’s central role in the development of trade unionism and the left in Peru, while weaving together a biographical study with a look at Peru’s history.

Latin American scholars and students will appreciate how Gonzalez draws from key works of Mariategui to put together a penetrating analysis of the many challenges facing Peru as it emerged from Spanish colonial rule.

A peculiarity of the Andean country was that at independence it lacked a strong national class. Its economy remained dependent on foreign powers (with Britain and the United States, replacing Spain), and the country had weak governmental institutions, a small manufacturing base and a semi-feudal structure outside of Lima in which the Indian, or campesino, majority occupied the lower ranks in the gamonalism system in which the indigenous class was subjected to the rule of land barons.

Mariategui explored how the country’s economic and political progress was impeded by an entrenched, white oligarchy as Peru emerged from colonialism.

The European-looking class promoted an export-based economy that opened the door to British and U.S. companies. In the early years of the post-colonial era, the economy was structured around the export of guano and nitrates. Allied with the economic and political elite, including the military, foreign companies (particularly from the United States) invested heavily in mining, agricultural and financial centers). Well into the 20th century, Peru failed to follow other Latin American countries that adopted the import substitution model to develop their economies.

Gonzalez devotes a chapter to Mariategui’s seminal work, “Seven Essays of Interpretation of Peruvian Reality,” which studies the economy, the land and Indian “problems,” public education, religion, regionalism and centralism, and literature. He argues convincingly that the book, along with Mariategui’s other works on the Peruvian reality, remains fresh, offering us the themes and a methodology to draw from even though the Peruvian reality has undergone deep transformations over the decades.

The “Indian Problem” -- the marginalization of the country’s majority indigenous population--was one of Mariategui’s major preoccupations.

As the economy developed, the indigenous agricultural people benefited little from the advances in education, remained in semi-feudal living conditions and were not drawn into the modernizing political system.

The prolonged exploitation of the country’s campesino class was at the root of the “dirty war” resulting from the insurgency of the Maoist Shining Path movement in the 1980s. Unfortunately, the Shining Path invoked the legacy of Mariategui to justify its misguided armed uprising and brutality.

Today, of course, the indigenous population is much more integrated into the country’s modern economy and political system. But many of the millions who have migrated from the countryside the cities are stuck in the ranks of the urban poor, struggling in the face of discrimination and racism.

Among leftists and other intellectuals, Mariategui was a pioneer insofar as he recognized the primacy of race in Latin America.

His focus on race—not to mention the national question—ran afoul with orthodox Marxists unwilling to loosen up their class-based view of the world. Comintern representatives in Latin America were troubled with the growing focus on national questions and race as opposed to the international class struggle.

Mariategui’s view that socialists should appeal to the communist-like beliefs of campesinos--rooted in collective economic activities of the Incan economy--along with the trade unionists in the growing market economy also deviated from orthodoxy.

Mariategui said that the “communitarianism of the Incas cannot be denied or disparaged for having evolved under an autocratic regime.” He referred to the Incan empire as the “most advanced primitive communist organization in recorded history.” He described “Indo-American socialism” as the alternative to imperialism.

As both an actor and theoretician, Mariategui fully embraced socialism after he and his co-editor Cesar Falcon at La Razon ran into trouble for criticizing the Leguia government in 1920. They were given the choice of going to prison or going into exile in Europe. Not dumb, they chose to go abroad.

Italy and the Political Bankruptcy of Liberal Democracy

It was in Italy where Mariategui deepened his political beliefs and commitment to socialism.

The worker uprising in Turin shaped his vision of trade unionism. He witnessed the founding of the Italian Communist Party, and he was deeply disturbed over the liberal elite’s failure to stand against the emergence of fascism.

“What he had seen in Europe made very clear that liberal democracy was in its death throes,” Gonzalez writes. “Its promise, its myth of the relentless development of productive forces, had been exposed in the first great industrial war. Social democracy and the politics of reform had exposed their complicity in the lie and revealed as they did so that capitalism had no inherent commitment to the full development of humankind.”

Mariategui returned to Peru in 1923. He took up his work again as a journalist, editing a number of publications, and he resumed his participation in trade union activities.

He enjoyed a public platform when Victor Raul Haya de la Torre, a central figure in Peruvian politics with whom he would eventually break, invited him to be a lecturer in the “History of the World Crisis” lecture series at the Universidad Popular that began late 1923. The lecture series helped him become a central voice in the debates about indigenismo, nationalism, reformism and imperialism.

Gonzalez recounts the famous debate between Mariategui and Haya de la Torre—a pivotal moment in the country’s political history—that has continued to play out in modern Peruvian politics. Haya de la Torre led the American Popular Revolutionary Alliance (APRA). The twice-elected president of the Peru, APRA’s Alan Garcia, shot himself this April as the police arrived at his home to arrest him on corruption charges.

Mariategui believed a socialist party should follow a “united front” strategy. The united front’s agenda was to bring together the struggles and demands of a working-class organization and the mobilization of indigenous and peasant people.This strategy, of course, also differed from the prevailing position of socialist orthodoxy with its focus on the industrialized working class. Mariategui discussed his political strategy in one of his early documents, “The First of May United Front Manifesto,” a collection based on his Universidad Popular lectures and the magazine that he edited until he death.

Mariategui’s publication, Amauta, provided an important forum for the debate over the path to socialism. Two years before he created the magazine, Mariategui had become the first general secretary of the Socialist Party, which later became the Communist Party of Peru.

With his commitment to including the peasant struggle, race, myth (religious-like revolutionary idealism) and the uniqueness of the Peruvian reality in the center of his analysis, Mariategui certainly fits into the heterodox Marxist tradition. His version of Marxism was rooted in a methodology dedicated to understanding and shaping actual history, practical human activity, revolutionary consciousness and what he described as “myth,” a vision or even religious-like ideal that inspires action.

“Socialism and syndicalism, despite their materialist conception of history, are less materialist than they might appear,” Mariategui wrote. “They rest on the interests of the majority but they tend to ennoble and dignify life. Western people are mystical and religious in their own way. Is revolutionary emotion not a religious emotion? It so happens that religion in the west has moved from heaven toearth. Its motives are human, social, not divine. They belong to life on earth and not to life in heaven.”

Mariategui passed away in 1930. That year, Amauta, the avant guard magazine that he founded eight years earlier, folded after a run of 32 issues from 1926.

The title--often translated as “wise man”--is the Quechua term for teachers during the Incan empire. It also became to be an endearing nickname for Mariategui. Gonzalez’s examination of Mariategui’s impact on the political left in Latin America and his contributions to Marxist literature shows why he remains one of the great teachers of the region today.

“Our revolution cannot be an imitation or copy,” Mariategui said, reflecting a spirit on the Latin American left that remains true today. “It must be a heroic creation, an epic struggle to create a new world.”

Book author Mike Gonzalez is a British historian and literary critic who was Professor of Latin American Studies in the Hispanics Department of the University of Glasgow. He has written widely on Latin America, especially Cuba and the Cuban Revolution of 1959.

[Essayist Gregory N. Heires, journalist and Portside Labor moderator, is the senior associate of the Communications Department of District Council 37, AFSCME, AFL-CIO, in New York City. He is also the blogger of www.thenewcrossroads.]