In her new book Why Trust Science? Naomi Oreskes, professor of the history of science at Harvard University, argues that if more people heard scientists talk personally about their values, it would help turn back the creeping tide of anti-science sentiment. The former geologist recently gave evidence both to a US House of Representatives subcommittee hearing, “Examining the Oil Industry’s Efforts to Suppress the Truth about Climate Change”, and a Senate Democrats special committee hearing looking at “Dark Money and Barriers to Climate Action”.

Your previous book, Merchants of Doubt, chronicled tactics used by professional climate deniers. What inspired this one?

During public lectures I would explain there was a scientific consensus on climate change and the contrarians were either outliers within the scientific community or paid shills of the fossil fuel industry. People would say: “Well that’s fine, but why should we trust the science?” I thought that was a legitimate question.

Do we have a crisis of public trust in science?

There has been exaggeration and even panic about this. Public opinion polls in the US consistently show that most people still trust science. And far more than they trust government or industry. However, there are certain areas – for example climate change, vaccination and evolution – where there is a high level of public suspicion. In these areas, people resist accepting what the evidence shows because of their values. The science can be seen to clash with their political, moral or religious worldviews, or their economic interests.

Discrediting science is also a political strategy – for example, the fossil fuel industry creating the impression that the science on climate change is unsettled stops action.

It’s fashionable to be sceptical of experts but we rely on them: dentists fix our teeth, plumbers unclog our drains

You could say the US president doesn’t trust science. Trump denies the climate crisis and has argued against vaccination in the past, and his vice-president, Mike Pence, demurs on evolution. How detrimental is this?

It is deeply problematic if the leadership of the US government is rejecting science, because it sends a signal to the American people and to business leaders that it is fine to reject science, and even to ride roughshod over scientists. It is also proof positive that this is not a question of people who simply don’t have access to good scientific information. The US president has access to more scientific information than probably anybody on the planet – but he actively rejects it on a number of issues because it conflicts with his own interests.

Why should we trust science? Is it because there is a “scientific method” that scientists follow?

There isn’t a single magic formula that guarantees results. We should trust science because it has a rigorous process for vetting claims. That includes the formal peer review of papers submitted to academic journals but also things like scientists discussing their preliminary results in conferences and workshops. Crucially, these practices are social in character. Consensus is key to when a scientific matter has been settled, and therefore when knowledge is likely to be trustworthy. We should also trust science because it is done by people who are experts in studying the natural world. It’s fashionable to be sceptical of experts but we rely on trained people every day for all kinds of things: dentists fix our teeth and plumbers unclog our drains. Science also has a substantial record of success – think of our medicines and technologies – suggesting scientists are doing something right.

You say we can learn from science gone awry. One example in the book is the eugenics movement, the odious crusade in the early part of the last century arguing for the improvement of the genetics of the human race by restricting the reproduction of “unfit” people, which particularly targeted the mentally ill and the poor…

Climate change deniers love to claim that because scientists were once wrong about eugenics, they may be wrong now about climate change. But I looked closely and there never was any consensus among scientists on eugenics. British geneticists and evolutionary biologists in particular – famous names like JBS Haldane and Thomas Huxley – who also happened to be socialists called out eugenics for its class bias targeting working-class people. It shows how diversity, in this case political diversity, can lead to assumptions being pointed out that otherwise would go unnoticed.

You also look at why it took so long for scientists to study whether the contraceptive pill can have mental health side-effects like depression.

A few years ago a big study came out that associated being on the pill with depression and it generated a lot of media attention. But we’ve known this for a very long time because millions of women have been telling us. Their self-reports were often discounted as unreliable by medical science. Lots of psychiatrists going back to the 1960s were aware and some took it seriously. But gynaecologists generally resisted that evidence for two reasons. One was because the pill really does work, so a lot were eager to prescribe it. But also, these were female patients and there is a long history of male doctors in particular discounting their reports. The lesson is scientists shouldn’t discount evidence simply because it’s not in their preferred form. 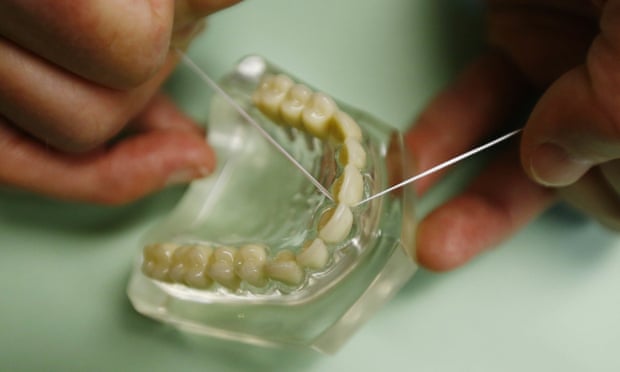 Do the benefits of flossing your teeth have scientific backing? Photograph: Julio Cortez/AP

You use a 2016 controversy around the effectiveness of flossing teeth as an example not of flawed science, but flawed journalism. What happened?

The background is the US government took the view that its dietary guidelines should focus on diet and so removed a recommendation to floss. A journalist from the Associated Press noticed and decided to look at flossing’s scientific basis for preventing gum disease and cavities. He found that if you took the gold standard of evidence – the double-blind randomised controlled trial – it was lacking. But you can’t do that kind of trial: you know if your teeth are being flossed or not. If you make that the standard then, necessarily, there won’t be “hard” evidence to support flossing. There is a kind of fetishism about RCTs. But there are cases including in nutrition and exercise when you can’t do them, or it would be unethical. In those cases, other types of studies, like population or animal studies, can be valuable. Or if you have some other kind of information – for example dentists’ and our own experience that flossing does a lot of good for our teeth and gums – it shouldn’t be discounted.

How can we increase trust in science where it is warranted?

It isn’t by giving people more scientific information. Rather scientists need to talk about the values that motivate them and shape the science they do. In many cases, scientists’ values are less different from the people who are rejecting science than you might think. And where values overlap, trust can be built. We may think of people who reject vaccination as being “on the other side” but we all love our children. A scientist’s “biodiversity” might be a religious believer’s “Creation”, but they are cherishing the same thing. Scientists being willing to talk about themselves and their experiences can also go a long way. In my book, I talk about something deeply personal: my own experiences with the contraceptive pill and depression. It may not be persuasive to everyone, but people are much more likely to accept factual information from those they can relate to or have a human connection with.

Lots of scientists work for oil, energy, pharmaceutical, food and cosmetics companies, and often bury unwelcome results, massage their studies and so on – how do you feel about these people and are they contributing to the cynicism about science in the public?

This is a big question, hard to answer in a soundbite. In the early 20th century, a good deal of important science was done in industrial laboratories, for example at Westinghouse, General Electric, Bell Labs, and Eastman Chemicals. But after the war, many large corporations cut back on their support of basic research, and some – most famously the tobacco industry – became involved in product defence and distracting research. A good deal of product defence research is now channelled through academia, and this is deeply problematic. I know from my email and Twitter feed that this has stoked distrust among some people, and rightly so.

Many scientific journals and universities have been very sloppy about taking steps to ensure the integrity of academic findings, for example by having and enforcing full disclosure. Academics have to be very clear about the soures of their support, and they should never agree to non-disclosure agreements. It is essential in science that we let the chips fall as they may.

You’ve recently been testifying in Congress. What’s the message you most want to send to politicians?

Human-induced climate change is under way. It’s no longer a matter of trust; our scientists have been shown to be right. Climate change deniers have run out of excuses.

Zoë Corbyn is a freelance journalist who specialises in writing about science, technology, research, higher education and ideas. She is based in San Francisco.

As the climate crisis escalates...

... the Guardian will not stay quiet. This is our pledge: we will continue to give global heating, wildlife extinction and pollution the urgent attention and prominence they demand. The Guardian recognises the climate emergency as the defining issue of our times.

You’ve read 11 Guardian articles in the last two months – made possible by our choice to keep Guardian journalism open to all. We do not have a paywall because we believe everyone deserves access to factual information, regardless of where they live or what they can afford.

Our independence means we are free to investigate and challenge inaction by those in power. We will inform our readers about threats to the environment based on scientific facts, not driven by commercial or political interests. And we have made several important changes to our style guide to ensure the language we use accurately reflects the environmental catastrophe.

The Guardian believes that the problems we face on the climate crisis are systemic and that fundamental societal change is needed. We will keep reporting on the efforts of individuals and communities around the world who are fearlessly taking a stand for future generations and the preservation of human life on earth. We want their stories to inspire hope. We will also report back on our own progress as an organisation, as we take important steps to address our impact on the environment.

We hope you will consider supporting the Guardian’s open, independent reporting today. Every contribution from our readers, however big or small, is so valuable. Support The Guardian from as little as $1 – it only takes a minute. Thank you.