“Algerians cannot and will not put up with being humiliated any longer. They want to live in a democratic Algeria with social justice. The national wealth must be fairly distributed. Clientelism and corruption must be forever banished,” 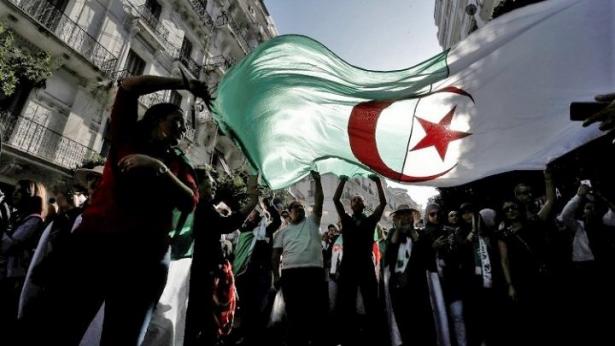 Thousands of demonstrators gathered on the streets of Algiers, on 1 November 2019, to march against the government and the elections proposed by the army., AP/Toufik Doudou

The last eight months have seen the rise of a protest movement without precedent in the history of Algeria. Millions of citizens have taken to the streets, since February 2019, in wilayas (provinces) across the country. Every Friday, week after week, Algerians come out to express their discontent. Friday 1 November was the 37th week, and the mobilisation was stepped up. The resignation, on 2 April 2019, of the former president, Abdelaziz Bouteflika, who had triggered the protest movement (the hirak, in Arabic) with his decision to stand for a 5th term, was not enough to resolve the deep-rooted social discontent.

The prospect of a fifth term was seen by a young generation that could take no more as a provocation and a humiliation. In Kherrata, a peaceful town in the wilaya of Bejaia, 23-year-old biology student, Aghiles, remembers the very first demonstration on 16 February, before the protests went nationwide.

“Some friends and I improvised a peaceful march. We’d had enough of the social situation, which was already complicated enough as it was, with growing unemployment, falling purchasing power… And to top it all, they add insult to injury with his candidacy.”

Bouteflika’s resignation, under pressure from the street and, above all, the army, withdrawing its support for him after 20 years of close collaboration, marked a turning point, an unexpected change. The peaceful and civic nature of the demonstrations earned worldwide admiration, with the most enthusiastic observers referring to it as the ’Revolution of Smiles’. Following a transition period during which the president of the senate, Abdelkader Bensalah, became acting head of state for 90 days, elections were announced, cancelled in July, and then called again, at the army’s initiative, for 12 December 2019.

Algeria has reached a crossroads and has to decide on its future path. Opinion is divided over the promise of elections next month, and the demonstrations have not subsided, quite the reverse. Having taken to the streets, many Algerians have realised that they need much more than just a change of face at the head of the country.

Higher than ever unemployment and living costs

Civil society movements opposed to the old system want to see a political change that will bring far-reaching social and economic reforms. Because the root of the anger now being expressed on the streets goes back a long way. For many observers, the exasperation with the political system is born out of the frustration felt by young Algerians and the overall social discontent.

Although the official rate of unemployment is 11 per cent, according to government figures, other statistics estimate a real rate of around 35 per cent. The young, who account for half of the population (53 per cent of the population is under 30 years old), are the hardest hit. A study published in 2016 revealed that almost four million people were working in the informal economy (in 2010), which means that almost half of the working-age population has no social protection. Algeria’s economy, heavily dependent on hydrocarbon exports, has been struggling since the fall in gas and oil prices in 2014, and people are increasingly feeling the impact.

Living costs have become prohibitively high for the middle classes in recent years. The average monthly wage is around 30,000 dinars (€225), but it costs 50,000 dinars (€373) to rent a three-bedroom flat in Algiers. According to research conducted by Algeria’s independent workers’ confederation, the CGATA, a family of five [editor’s note: large families being the norm] now requires a household income of over 87,000 dinars a month (€649) to live decently. Another example is the price of fruit and vegetables, which has spiralled, rising by 100 per cent in some cases within the space of a year.

As Nassira Ghozlane, general secretary of the public workers’ union, SNAPAP, points out, added to all these problems that make everyday life difficult is the decrepit state of Algeria’s public services, especially health and education.

Junior doctors (medical interns), teachers and students were the first to call strikes and demonstrations, in 2015 and 2016, to denounce the lack of investment, consideration and the misuse of public funds. For Ghozlane, the sectoral struggles have been the incubators of the protest movement that has emerged today.

“There are teachers who work for just 12,000 dinars (€90) a month. Even those with a PhD, research professors, earn that wage and sometimes have to wait until the end of the year to be paid,” explains Yamina Maghraoui, president of the SNAPAP women’s committee. According to a study conducted by the union, 65 per cent of university students have to take on subsistence jobs. “Employees agree to work for 3,000 dinars (€22) a month, because they have no other choice,” adds Ghozlane.

The penury in the public health sector is notorious. “Sometimes, there are no syringes, no alcohol and no surgical thread. We work in appalling conditions. And people take out their anger on us, thinking it’s the doctor that hasn’t done his work. They get aggressive, sometimes, when we tell them there is no alcohol or gauze,” a junior doctor, Amine B., tells Equal Times. Although public sector health care is free, those who can afford it turn to private care or go abroad for treatment, as has the former president of the Republic, Abdelaziz Bouteflika, who has drawn criticism among Algerians for being treated in France and Switzerland.

Tahar Belabbes is one of those social leaders that has been fighting for years. He has organised, led and called a series of unemployed workers’ protests since 2013, as part of the National Committee for the Defence of the Unemployed, mainly in the south of the country. “I’ve never lost hope. I’ve always fought for young Algerians to have dignity, to be able to find work and to live a decent life. Have you not seen the hundreds of young people crossing the sea to get to the other side?” asks the activist, referring to those known as harragas. “They risk their lives for a better life. Why not give them it here?”

The Algerian economy is suffering the consequences of its dependence on the oil and gas sector (which brings in 75 per cent of its revenues) and the lack of development in other sectors such as agriculture or services, which could provide more jobs. The disillusionment at the Tuesday demonstrations, staged by students, is the same for everyone: further studies are affordable, and many choose to do them (the number of students has multiplied by four in 20 years), but the chances of finding a job are slim, and more so for young women.

“You have next to no chance of being taken on at a company if you don’t know anyone working there,” says Sara, a law student from Algiers.

Students and the unemployed formed the ranks of the very first demonstrations, alongside the low-income families and public sector employees, bringing unexpected social diversity to the movement. “These are protests, in their rawest form, led by young people with no experience and no partisan backing,” says sociologist Nacer Djabi. Indeed, the movement’s collective resolve has been forged outside of any political party involvement and goes beyond the socio-professional demands of the groups forming it. “We have always had social grievances, but the sheer obstinacy shown by those in power has led us to the conclusion, the conviction, even, that they will never give up. So, the only solution is political change,” Tahar Belabbes tells Equal Times.

“The hirak is our hope. It must carry on until our demands are met. Unemployment is rising and the country is in recession, but that must not discourage us. The solution lies neither in dialogue nor elections. The solution lies in the total satisfaction of our demands: a transition period, a new constitution and a new system,” he adds.

“If we don’t achieve change now, it will be too late”

The need for unity within the movement and the refusal to make concessions regarding the need for a fundamental change of system are sentiments shared by Rachid Malaoui, president of the CGATA and SNAPAP. For the union leader, the situation is more serious than it appears and it is no longer the moment to be talking about social demands in the run-up to an election that has been widely rejected by the movement. “We need to resolve the political issue before we can go on to talk again and make decisions about the social issues. If we don’t achieve change now, it will be too late.”

Malaoui recalls that during a similar period in 2011 “the authorities shelled out public money to quell the popular discontent, and succeeded. There are ways and means, material and financial, if they want to buy the leaders’ silence and temporarily satisfy the social demands. But now the coffers are empty.”

Under the auspices of independent trade union centre the CSA, 28 unions called a general strike for 28 October, which was relatively well backed (up to 75 per cent in some wilayas). “Algerians cannot and will not put up with being humiliated any longer. They want to live in a democratic Algeria with social justice. The national wealth must be fairly distributed. Clientelism and corruption must be forever banished,” exclaims Boualem Amoura, president of the national education and training workers’ union, SATEF, and an active member of the CSA. “You have pillaged the country, you band of thieves”, “We want a share of the takings”, were amongst the slogans often heard at the demonstrations.

With a month or so to go before the elections, the candidates are waging an insufferable campaign. The powers that be want to go to the polls at all costs. And the arrests of demonstrators and opposition figures are being stepped up. “The regime would not withstand a third postponement of elections,” wrote daily newspaper El Watan. The independent body in charge of organising the elections has given its assurance that the vote will be transparent, and decisive for the country’s future. But its president is no other than Bouteflika’s former justice minister, hence the protesters’ lack of faith in the body and the strong likelihood that they will boycott the election. The coming weeks are set to be decisive for the country’s future.

Khelaf Benhadda, is an Algerian journalist who works for the French-language press and Algerian television. He is also the founder and director of news sites Algérie Direct, Algérie Nouvelle and DND ( Dernières Nouvelles de Dzaïr).

This story has been translated from French.