Enter WT:Social / Cities vs. FCC / Broadband for All / Privacy Win at the Borders / Coup? What Coup? / Streaming Wars / Cellphone Access / WBAI / When the Right Shoplifts a Video 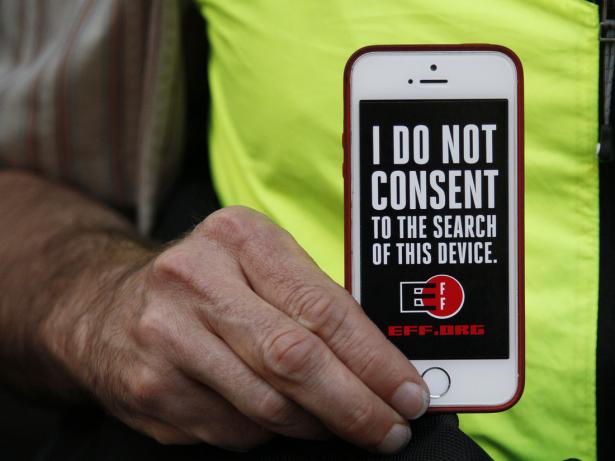 U.S. Customs and Border Protection agents are now restrained from searching the phones and other digital devices of international travelers at border checkpoints in U.S. airports, Photo; Eric Risberg/AP

Wikipedia co-founder Jimmy Wales has quietly launched a rival to Facebook and Twitter that he hopes will combat “clickbait” and misleading headlines. WT:Social, his new social-networking site, allows users to share links to articles and discuss them in a Facebook-style news feed.

The Federal Communications Commission faces a legal battle against dozens of cities from across the United States, which sued the FCC to stop an order that preempts local fees and regulation of cable-broadband networks.

The promise to provide universal free fiber broadband by nationalizing BT Group Plc’s Openreach unit dominated broadcasts and sent telecommunications shares plunging. It’s a continuation of Labour’s plan to take control of key utilities, with taxes from large multinational companies -- in this case the likes of Amazon.com Inc. and Facebook Inc. -- helping to foot the bill.

A federal court in Massachusetts has ruled border agents can no longer perform suspicionless device searches. The lawsuit was filed by 11 travelers whose devices were seized and searched by CBP and ICE agents. For some of the plaintiffs -- represented by the ACLU -- this happened multiple times.

In addition to traditional cable, we’ve also got streaming players like Netflix, Hulu, Amazon, HBO Now, and CBS All Access. And more platforms are either coming or already here: Apple TV+ launched in early November, Disney+ arrives today, HBO Max is coming in May 2020, and Peacock from NBC Universal will arrive in April of next year.

Trump is purging subscribers from a program designed to provide poor people with cellphone access.

WBAI is Back from the Dead, Again

The embattled New York radio station went back on air with local control, by court order of NYS Supreme Court Judge Melissa Crane. The restoration of live local broadcasting, access to their website, archives and live stream came after a month of legal wrangling in the courts.

How My Video Went Viral on Rightwing Outlets

Tony Shaffer, a former intelligence officer and advisory board member for Trump’s 2020 campaign, shared a screenshot of the video with his 88,000 followers. Shaffer’s tweet was reshared nearly 9,000 times. Conservative news sites such as The Blaze picked up the story; so did countless blogs and message boards I’d never heard of.