The vast majority of the House Democratic Caucus are progressives on the issue of trade. They have staunchly insisted that without drastic changes, a new NAFTA is not worth having. They have taken their cues from AFL-CIO President Richard Trumka. 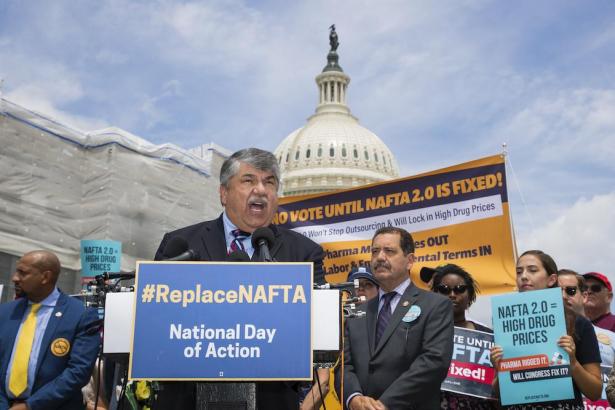 People who have been following the convoluted negotiations on the new update to NAFTA, between House Speaker Nancy Pelosi and the Trump administration, have been baffled about how to interpret this complex dance. Herewith an explanation.

The back story: Last December, Trump announced that he was pulling the U.S. out of NAFTA and would replace it with a much better deal, which he rebranded the U.S. Mexico Canada Agreement, or USMCA. This was one part Mexico-bashing, one part sucking up to industrial unions and workers in the Midwest, and one part Trump’s effort to posture hardline on trade generally.

But a revised NAFTA had to be approved by the House, which unfortunately for Trump now has a Democratic majority. And the deal that Trump devised was a stinker. It added a couple modestly decent provisions, like wiping out the pro-corporate investor-state dispute settlement (ISDS) process, which allows companies to sue nations that change laws in ways presumed to violate trade deals for expected future profits. But its protections for labor were far too weak. And it continued some odious provisions such as sweetheart provisions for the drug industry, allowing longer patent protections and even higher drug prices. And a lot more.

So there commenced prolonged negotiations between a House working group headed by Ways and Means Chairman Richard Neal, the most influential corporate Democrat in the House, and Trump’s top trade negotiator, Robert Lighthizer, on how to improve the draft agreement. Both dearly want a deal. Neal has issued repeated statements, sometimes with Pelosi by his side, insisting that a deal is almost at hand. This week, when Pelosi and Neal took the process over from the working group for direct negotiations with Lighthizer, there was reason to believe they might cement that deal.

But the vast majority of the House Democratic Caucus are progressives on the issue of trade. They have staunchly insisted that without drastic changes, a new NAFTA is not worth having. They have taken their cues from AFL-CIO President Richard Trumka, the offstage hero of this saga, who engaged with his own Twitter war with Trump this morning.

Two members of the working group have confirmed to me that nothing will be approved unless Trumka signs off on it. And despite a lot of posturing by Neal that a deal is just around the corner, Trumka isn’t budging.

Another set of cynical players are a small but vocal contingent of corporate Democrats, who have been pressuring Pelosi to accept a deal. This gang is led by Cheri Bustos of Illinois, who chairs the House Democrats’ fundraising arm, the Democratic Congressional Campaign Committee (DCCC).

Supposedly, “frontline” Democrats—freshmen in districts carried by Trump—need this deal. But think again. A total of 43 Democrats flipped Republican seats last year, but only 14 members of the entire Democratic caucus signed a letter of support last summer urging their leadership to reach agreement. Most of the freshmen want no part of Trump’s deal.

The reality is that Bustos, Neal, and other corporate Democrats are using the supposed need for freshmen to be able to vote for a NAFTA deal as camouflage for the real game—namely, corporate Democrats voting with House Republicans to hand corporate America (and Trump) a victory. It’s not as if ordinary voters in the Midwest are on their edge of their seats following every detail of the NAFTA talks. This is all cynical inside-baseball.

As for Pelosi, who has been intermittently criticized by House progressives for playing footsie with Neal, my reporting suggests that she is playing a kind of deft four-dimensional chess.

For starters, Pelosi does not want Trump to be able to contend that he had a great NAFTA deal, but that House Democrats killed it for purely partisan reasons. So she has been going to great lengths to find out the best deal she can get—and the deal continues to be lousy. Then when the talks collapse, it’s Trump’s fault, not hers.

Second, with an impeachment vote coming up, she needs a united caucus. Pelosi needs to demonstrate to the small gang of corporate Democrats that she negotiated in good faith, so that they don’t go away mad.

On the broader trade front, Pelosi needs a good working relationship with Robert Lighthizer going forward. There are far bigger fish to fry, namely China. Many progressive trade activists value Lighthizer, perhaps Trump’s only decent appointee, and don’t want to blow him off.

There is also the complex calculation of how trade plays in the 2020 election. On the one hand, if a new NAFTA actually delivered something for industrial workers in the Midwest, Democrats would want to share in the credit. On the other hand, why hand Trump bragging rights, especially when the substance of the deal delivers just about nothing.

On Thursday, after weeks of mixed signals, Pelosi finally seemed to pull the plug. Contradicting Neal’s endless prattling about a deal being in sight, Pelosi said simply, “I’m not even sure if we came to an agreement today, that it would be enough time to finish—it just depends on how much agreement we come to.” By finish, Pelosi meant in the 2019 session of Congress.

Trump, angered by the delay, lashed out at Trumka on Fox and Friends this morning, claiming that he was “playing [Pelosi] like a fiddle.” Trumka struck back on Twitter, saying that Trump should “stop fighting us so hard and negotiate a NAFTA that actually works for workers.”

Last night my sources confirmed that the two sides are nowhere near an agreement. And of course, if Trump’s revised NAFTA is not approved in 2019, it will certainly not be approved in an election year as the impeachment drama reaches its climax.

Robert Kuttner is co-founder and co-editor of The American Prospect, and professor at Brandeis University's Heller School

Thank you for your support. The American Prospect can't do it without you!
We are grateful for your generosity as we continue to pursue our mission. You are helping us to advance our shared goals through informational reporting, analysis of current public policy and legislative proposals, and encouraging spirited discussion that considers both today's realities and tomorrow's possibilities. Together we make an impact. Click here to support The American Prospect.