Despite a bumpy execution, this Black Christmas works in the way it summons the anxieties of women and how they’re attuned to the danger of men lashing out against “persecution” that undermines their privileges and reputations. 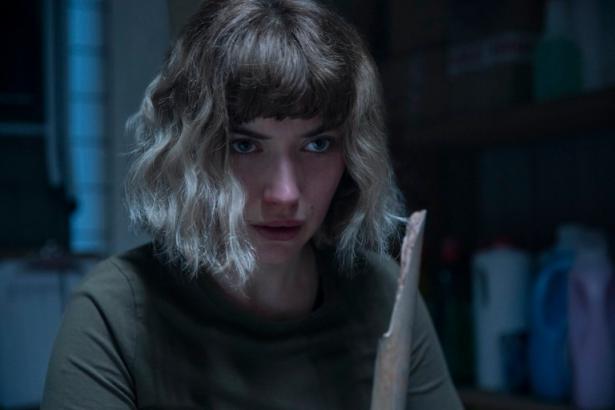 Walking home alone at night, the appearance of a strange man can cause alarm, even if it’s just some random guy minding his own business and scrolling through Twitter. As a precaution, you slide your keys between your fingers as a makeshift weapon, a means of protecting yourself should the worst-case scenario play out. As women, we often laugh off our shared paranoia, but the possibility of danger remains credible; we’re instilled with fear of violent men, a fact that rings as true today as it did 40 years ago, when Bob Clark’s pioneering sorority slasher Black Christmas made its debut. In that film, men rage against their perceived loss of control over women, whom they terrorize and mutilate as a means of reclaiming power. Clark’s surprisingly feminist thriller was progressive in its treatment of issues like abortion and sexuality, which provides fertile ground on which contemporary retellings can be built. Directed by Sophia Takal (Always Shine), who shares screenwriting credit with April Wolfe, the latest Black Christmas reboot understands the frustrations and lived horrors of modern sexual politics, but stumbles over its scares and the finer points of its feminist messaging.

Aside from the yuletide sorority-house setting, this new Black Christmas barely resembles Clark’s classic. Riley (scream queen Imogen Poots) is haunted by the memory of her rape by the president of the school’s most prestigious fraternity, the same one to which founder Calvin Hawthorne once belonged. The members of Delta Kappa Epsilon, or the “dekes,” resent Riley’s accusations, seeing it as part of a broader “social justice warrior” vendetta. Pushback against “the man” can be seen all around Hawthorne College, most notably in the form of Riley’s headstrong sorority sister, Kris (Aleyse Shannon), who petitions to revamp the male-dominated, anglocentric curriculum and oust the traditionalist Professor Gelson (Cary Elwes), a shady reptile of a man whose ancestors owned slaves (in the North). Takal and Wolfe initially seem apprehensive to embrace Kris’ crusade, portraying her as somewhat overbearing as she guns for signatures outside Gelson’s class. Even her own sisters eye her efforts skeptically; it registers as the film’s non-committal way of pre-empting accusations of empty “wokeness.”

Riley suspects foul play when her sorority “little” goes missing. Naturally, the college police are incredulous; it’s one of the many ways in which the film addresses authority’s reluctance to believe women. Before long, Riley and the other girls are harassed with creepy text messages—a natural technological update on the original’s prank phone calls, but one that packs none of the perverse punch. Films like Personal Shopper and Unfriended demonstrate that presumably impersonal modes of communication can be wielded to incredibly suspenseful ends, but the texts in Black Christmas flub a tension-building element so central to what made Clark’s film scary. They function merely as a clunky indication that trouble is on the horizon.

Riley and her sorority sisters are like family, a point perhaps unnecessarily emphasized by the decision to make her character an orphan. Though it occasionally lands like a superficial expression of womanhood, the talk of diva cups and vibrators isn’t entirely out of place considering the messy intimacy of college life and the sexual awakenings fostered therein. Riley, Kris, Marty (Lily Donoghue), and Jesse (Brittany O’Grady) aren’t exactly lived-in characters, but Takal and Wolfe’s warm, often humorous characterizations bring out the women’s discrete personalities.

Tensions run high after the girls crash a fraternity bash and their video-recorded call-out of Riley’s rapist goes viral. In the aftermath of the incident, their holiday potluck is interrupted by a murderous hooded figure with a crossbow. The ensuing home invasion sequence is eerily lit by green and red Christmas lights as the women crawl and hide from their attacker, though the dull choreography of hide-and-seek leaves much to be desired. But the actors, especially Poots and Shannon, lend a jittery despair to the scene. This PG-13 Black Christmas isn’t too concerned with spectacular deaths—in that department, it lacks the bravado of Clarke’s version (there’s nothing as memorable as the iconic caroling death of Margot Kidder’s Barb) and the gore of the previous remake from 2007. The best kill in Takal’s update happens within the first 10 minutes, a scenario that nightmarishly calls upon the last-ditch use of keys as weapons of self-defense.

Despite a bumpy execution, this Black Christmas works in the way it summons the anxieties of women and how they’re attuned to the danger of men lashing out against “persecution” that undermines their privileges and reputations. But rather than dive deeper into that element, Takal and Wolfe get sidetracked in the third act creating a juicy mystery with supernatural dimensions. The outcome feels forced and scatterbrained, much like the war cry of female empowerment that abruptly but predictably draws the events to a close. Black Christmas is not entirely unwelcome in a world of useless reboots; its college dynamic is compelling, and it launches a satisfying critique of the havens of toxic masculinity that old-guard fraternities often perpetuate. It has plenty of ideas, but falls short in delivering the scares.

Note: April Wolfe is an occasional contributor to The A.V. Club. She has never met Beatrice Loayza.