At a time when the desire for comfort drives viewing habits, BoJack Horseman and A Teacher urged audiences to sit with their discomfort over who we’re prepared to forgive and who we see as victims. 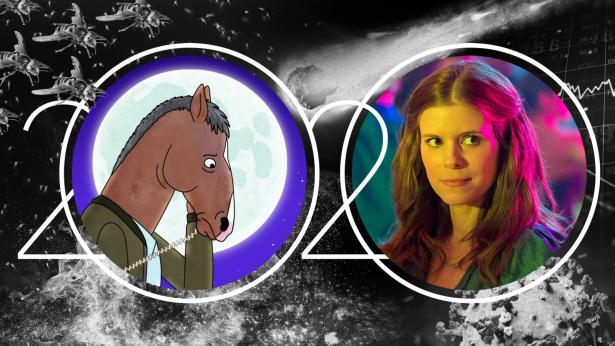 This year was marked by calls for escapism as much as a push for greater accountability. Lockdown orders may have prompted us to share recommendations for the best comfort watches, but even in the midst of the pandemic, people took to the streets to protest systemic racism and police brutality. Watch parties became a conduit for connecting virtually, while all manner of companies were challenged on their exclusionary hiring practices, and Tarana Burke’s #MeToo movement continued to shine a light on sexual violence and other abuses of power across industries.

Founded in 2006, the #MeToo movement gained new momentum in 2017, as numerous actors and artists, including Gabrielle Union and America Ferrera, spoke up about sexual assault and harassment. Ashley Judd and Rose McGowan were among the dozens of women who brought forth allegations against Harvey Weinstein. As support for survivors and victims grew, so did the hand-wringing over whether the disclosures and discussion about inequitable power dynamics were going “too far.” But many proponents viewed this reckoning as just getting started.

Here, 2020 offered some catharsis—the consequences for abuse went beyond professional ouster as Weinstein was sentenced to 23 years in jail, and Hollywood confronted his predation and the culture that enabled it in The Assistant. But TV creators took a more holistic approach to #MeToo stories this year. Both the final half-season of BoJack Horseman and the limited series A Teacher recounted abuse and even broached the possibility of redemption. Perhaps most strikingly, both shows showed the aftermath of abuse, for both the perpetrators and the survivors. At a time when the desire for comfort drives viewing habits, BoJack Horseman and A Teacher urged audiences to sit with their discomfort over who we’re prepared to forgive and who we see as victims.

BoJack’s morose horse protagonist seemed on track for a redemption arc in the first half of season six. After months in rehab, BoJack (Will Arnett) gained valuable insight into his self-destructive behavior. The not-entirely-washed-up actor began to see what’s been clear to audiences since season one: Being a survivor of abuse doesn’t excuse his own abusive behavior, and his celebrity status, which was his shield for so long, has actually thwarted his development. By midseason, a sober BoJack had rebuilt his life away from the limelight, teaching acting to Wesleyan students. His younger sister, Hollyhock (Aparna Nancherla), was happy to see him when he first visited Connecticut, and his relationships with Diane Nguyen (Alison Brie), Princess Carolyn (Amy Sedaris), and Todd Chavez (Aaron Paul), while somewhat strained, were far from over.

Given BoJack’s offenses—trying to have sex with his former crush’s teen daughter, encouraging a recovering addict to go on a bender with him, being high at work and strangling his co-star—it was as close to a happy ending as he probably deserved. But “A Quick One, While He’s Away” proved BoJack’s comeuppance was still on its way. Series creator Raphael Bob-Waksberg has fielded questions about how the show would end since at least season two, but the first real hint at the conclusion came in the fifth season. When BoJack begged Diane to once again publicize his misdeeds, trading memoir for exposé, she declined, because that would mean he was still putting the burden on others. Bob-Waksberg and the rest of the BoJack team, including Lisa Hanawalt, Kate Purdy, Joanna Calo, and Aaron Long, drew an important distinction there, between being held to account and taking responsibility.

The final leg of the series sees BoJack both assuming responsibility and being held responsible, using its signature trenchant writing, as well as the visual panache Hanawalt cultivated for years. The same type of dry-erase boards that once listed fake Oscar nominees now bear witness to BoJack’s misconduct, though the worst is saved for last. BoJack is challenged to rethink his “fuck-ups,” as is the Hollywoo(d) public—and the audience. The litany of offenses is undeniable, and BoJack is exiled.

The last two installments stray from BoJack storytelling form; the penultimate episode, “The View From Halfway Down,” seems to bring things to a conclusive end with a series of heart-stopping moments. And it’s the series closer, “Nice While It Lasted,” that offers the most devastating moment. The final scene, in which BoJack and Diane stare up at the cobalt blue sky, leaves so much unsaid between the two characters. But BoJack Horseman’s final episodes delivered what few productions have dared to do since we as a society began to reckon with predators and the power dynamics they’ve benefitted from. Along with offering a glimpse of what closure could look like for survivors (the Fireflame billboard is a great background gag and a triumph for Stephanie Beatriz’s Gina Cazador), BoJack Horseman, in the series’ most meta-moment yet, showed what it looks like to hold abusers—including your faves—responsible.

Hannah Fidell’s A Teacher, which premiered November 10 on FX on Hulu, heads toward similar territory, though it takes a very different path to get there. Fidell’s expanded her character study from 2013 into a quietly powerful rumination on who is viewed as a victim and who is deemed a predator. The limited series centers on Claire (Kate Mara), an attractive 30-something teacher painfully aware of the rut she’s in, but too invested in her self-denial to change anything. Her life is full of obligations, not aspirations; it always has been, Claire thinks, as she’s had to put everyone else’s needs before her own. So convinced of her own altruism is she that when she meets Eric (Nick Robinson), a prepossessing high school senior, Claire almost immediately offers to tutor him for the SATs. And because she continues to believe she has very little control over her life, it’s years before she’s able to see that she was already exerting undue influence over a teenager. She tells Eric he’s smarter than his friends; after learning he wants to be pre-med at University of Texas at Austin, she takes him on a campus visit. Claire shares a little too much of her own life during these encounters, sits a little too close, encourages Eric to call her by her first name. In short, she’s grooming him, though she believes their relationship is equitable because the attraction is mutual.

FX on Hulu includes a disclaimer about the abuse and grooming ahead of each episode, but for the first half of the series, Claire and Eric’s relationship is shot dreamily, their exploits set to the kind of swelling music found in romantic films. This manipulation of the audience, a subversion courtesy of Fidell, mirrors the manipulation of Eric, who initially believes he was in a relationship with someone who happened to be older. His feelings about what happened change over the course of A Teacher’s 10 episodes; when he first has sex with Claire, he shouts, “I’m the motherfuckin’ man,” to himself. Years later, when asked about the abuse in college, Eric downplays what happened, even though it’s clearly taken a psychological toll on him, because men can’t be, or aren’t supposed to be, victims. After one last time jump, Eric recognizes he was abused, which, though an important step, is just the first in a long journey toward healing.

Fidell’s narrative is made of up two distinct parts, including the fallout of Claire and Eric’s relationship, because, as the director has said, “The story doesn’t just end when the headline comes out.” In the first several episodes, Fidell creates space, though not exactly empathy, for Claire’s motivations. Like BoJack, Claire also came from an abusive background, but her version of “acting out” was to bottle everything up—her anger, her desire, her fear. She views her behavior with Eric as a kind of latent teen rebellion, which would be pathetic if it weren’t so destructive. Early on, the story plays like a fantasy because it’s Claire’s fantasy, one in which she’s in a gratifying relationship and gets to be a mentor. Even after she’s been arrested, Claire struggles to see herself as an abuser. For Claire, abusers are men like her father, whose own self-destructive behavior robbed her of a childhood. Her mistake, she says, was in allowing herself to be caught up in her own and Eric’s feelings.

In its final episodes, which we won’t give away here in their entirety, A Teacher begins to grapple with the consequences of Claire’s actions, and who is actually bearing the brunt of them. There’s a feint toward a happy ending, and a stirring speech: “I have to live with this forever. And so do you.” But the four hours of storytelling that come before the finale have plenty of narrative heft and groundbreaking twists on their own. Like BoJack Horseman, A Teacher contemplates redemption, but not before reform, and certainly not before acknowledging an offense has been committed. In focusing on the aftermath of abuse and on historically overlooked victims, both series contribute to a new chapter of #MeToo stories.