To abandon a far-reaching agenda of economic policies, as a handful of former and current Labour lawmakers suggest, risks undercutting the popularity still buoying the party. 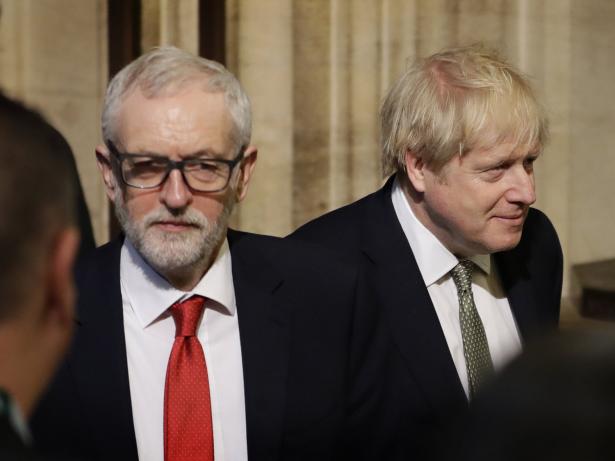 After Britain's Labour Party suffered a staggering election defeat on Dec. 12, the party's stunned silence has given way to infighting.

Labour lost 59 seats in Parliament — in its worst election result since 1935 — and now its members are split over how to bounce back.

The party's leader, Jeremy Corbyn, plans to step down in early 2020, setting off a race to replace him. While loyalists vow to soldier on with his socialist vision for Britain's economy, other party officials have decided "Corbynism" must be left behind. No matter which route the main opposition party chooses, analysts say, it will be difficult for it to recover the seats it lost, let alone to win a majority over Prime Minister Boris Johnson's Conservative Party.

Corbyn's supporters have largely chalked up their misfortune to Brexit. Labour failed to articulate a firm position on Britain's decision to leave the European Union, first tepidly opposing it in 2016, then reluctantly endorsing it in 2017, before embracing a second referendum in 2018. That garnered broad voter mistrust by 2019.

While "leavers" flocked to the Conservatives, many "remainers" supported the more ardently anti-Brexit parties, the Scottish National Party and the centrist Liberal Democrats, whose vote shares surged by 300,000 and 1.3 million respectively. In turn, Labour's share declined by 2.6 million.

Labour now holds 203 of the House of Commons' 650 seats; the Conservatives rose to a large majority of 365.

Corbyn and his allies argue that the party has little need to alter its progressive course. Instead, they say, they must only wait for Brexit, which is expected to take effect by the end of 2020, to slip from the front pages so that Britain's politics can return to normal.

However, many party members are hesitant to blame Brexit alone. For them, Labour's leadership was responsible for the rout.

"This colossal failure must be owned lock, stock and barrel by Jeremy Corbyn," Ayesha Hazarika, a senior Labour strategist, wrote in The Evening Standard.

"It was Corbynism, not just Mr. Corbyn, that failed at this election," added Owen Smith, a prominent former Labour member of Parliament, in The Financial Times.

To make their case, critics point to the Labour leader's polling numbers. In all of Britain's recorded history, there has been no opposition leader as unpopular as Corbyn, whose 61% negative opinion rating has been shaped by criticism of his socialist politics and accusations of anti-Semitism. When voters left the polls on Dec. 12, 37% of the traditional Labour supporters who voted for a different party cited discontent with Corbyn as the principal reason for their defection. By comparison, only 21% pointed to Labour's position on Brexit and just 6% to its economic policies.

When Tony Blair, the longest-serving Labour prime minister in U.K. history, offered his analysis of the party's defeat in a speech in London last week, he took aim at Corbyn's proposals. "[This] never has appealed to traditional Labour voters, never will appeal to them, and represented for them a combination of misguided ideology and terminal ineptitude that they found insulting," he said.

The data are not as certain. The climate targets of Labour's Green New Deal are supported by 56% of the public, including 47% of Conservatives; 60% of voters endorse the nationalization of Britain's railways; and 62% of the public back the broadband initiative.

For a country whose most popular politician, Boris Johnson, enjoys the approval of only 35% of the public, and whose defining issue, Brexit, is embraced by just 46% of the public, the popularity of his opponent's election manifesto was uncharacteristically high. To abandon that agenda, as a handful of former and current Labour lawmakers suggest, risks undercutting the popularity still buoying the party.

"If Labour moves to the right, it will be time for us to think about organizing outside the party," says Alex Stoffel, an activist with Labour for a Green New Deal and a member of Momentum, the grassroots group that propelled Corbyn to power.

For now, the "civil war" within the party that Labour strategist Hazarika warned of is yet to break out.

Leading contenders to replace Corbyn — Rebecca Long-Bailey, Keir Starmer, Lisa Nandy and Emily Thornberry — have served in Labour's parliamentary leadership and have thus far maintained their support for Corbyn's policies. His agenda remains popular with ordinary party members and some of the big unions who will play a crucial role in choosing the next Labour leader.

But finding a leader who can appeal to both party and country has become a daunting double bind for those focused on winning the next election in 2024. Jess Phillips, a more moderate yet hard-charging parliamentarian, has been widely discussed as a promising candidate, but her lack of leftist credentials and her past quarrels with Corbyn seem to have soured her odds, according to Britain's betting markets.

"For us to be back in government in five years' time would require us to pick a strong and sensible candidate who can reconcile the two wings of the party," says a staffer of a senior Labour legislator. The staffer declined to be named to speak candidly about the current climate within the party. "But I'm not sure we can."