“Their wine cave is a wonderful metaphor for the ways in which these people are divorced from the average American.” 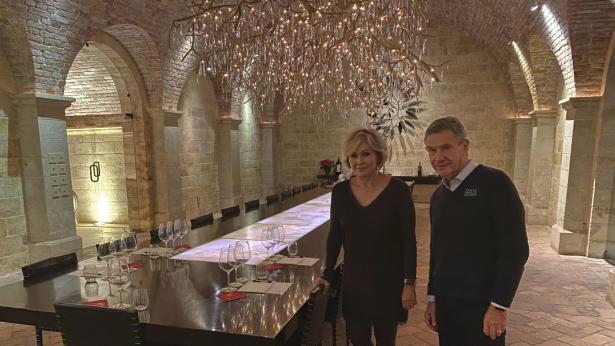 When wealthy Californians pay $2,800 to meet a presidential candidate, they expect to be wined and dined.

But, thanks to a recent debate exchange between Elizabeth Warren and Pete Buttigieg, future fund-raisers among members of the Democratic Party’s donor class will probably not be held in the nearest wine cave.

Warren made this venue a bit radioactive on December 19 when she denounced Buttigieg for partying with several hundred well-heeled supporters at the Hall Rutherford winery in Napa Valley.

The vineyard owners, Craig and Kathryn Hall, have given $2.4 million to Democratic candidates, party campaign committees, and PACs since the 1980s. But, on this occasion, the disclosure that the Halls served $350 bottles of cabernet sauvignon under a chandelier with 1,500 Swarovski crystals drew the populist wrath of Senator Warren.

“Billionaires in wine caves should not pick the next president of the United States,” Warren declared, a sentiment shared by Bernie Sanders, who later needled Buttigieg, during the same debate, about the 40 or more billionaires and their spouses who have contributed to his campaign.

Amid the resulting negative publicity, Mayor Pete’s own billionaire hosts tried to position themselves as ordinary civic minded Democrats, sympathetic to his positions on climate change, gun safety, and immigration.

“I am just a pawn here,” real estate developer Craig Hall complained to the New York Times.  “They are making me out to be something that’s not true.  And they picked the wrong pawn.  It’s just not fair.”

Rallying to the Halls’ defense were several neighbors in swanky St. Helena, CA, all well versed in the ways of wine caves. One denied that partying in them “connoted something snobbish.” Another noted that such storage places provide cheaper, natural temperature control, thus reducing the industry’s carbon footprint.

James Conaway, author of the Times best-seller Napa: The Story of an American Eden and a more recent sequel, Napa at Last Light: America’s Eden in the Age of Calamity, has a very different view of nouveau riche “vintners” and their environmental impact.

In Napa at Last Light, Conaway chronicles the Halls’ relocation to Napa from Texas, where Craig made his real estate fortune and once owned the Dallas Cowboys. In Dallas, the Associated Press has reported, “Craig Hall’s role in the 1980s savings and loan crisis” included making “risky investments” during the savings and loan meltdown” that required a $300 million federal bailout. His lobbying of House Speaker Jim Wright triggered a congressional ethics investigation that drove Wright from office in 1989.

Rebounding from that scandal, Hall arrived in Napa where, according to Conaway, “they quickly became benefactors of charities, the arts, and political causes.” Being big Democratic Party donors during the 1990s helped make Kathryn Hall our ambassador to Austria during Bill Clinton’s scandal-scarred second term.

Since 2008, the Halls have been trying to expand their existing wine making operations in both Napa and Sonoma Counties by creating new vineyards on the Walt Ranch, a 2,300 site they purchased for $8 million in the Howell Mountains. Concerned neighbors and local environmentalists have opposed this project because it would require cutting down 14,000 trees, resulting in hill-side erosion and damage to Napa City’s drinking water supply.

As Conaway reports in his most recent book, critics “fear that houses will soon follow, vineyards having become stalking horses for serial McMansions and more ambitious development.”

The Halls are used to getting their way in wine country, even amid protestors brandishing signs warning their customers about “Chainsaw Wine” and an environmental “Hall-O-Caust.” According to Conaway, one of their earlier winery expansion schemes involved tearing down a nearby trailer court, thereby “eliminating a significant portion of St. Helena’s rare affordable housing.”  Meanwhile, Craig and Kathryn live in a lavish home of their own-- located above the Napa Valley resort known as Auberge du Soleil--where their house guests have included Bill and Hillary Clinton.

In 2016, the Halls lawyered up again and used their political clout and bottomless bank account to persuade county supervisors to back their plans for the Walt Ranch. But, as the San Jose Press-Democrat reported three months ago, foes of that project won a partial victory in what is now an 11-year legal battle,

A state appeals court ruled that “county officials did not properly show how preservation of an unspecified swath of woodlands on the site would offset the harm to the climate by the tree removals”—and sent the case back to a trial judge. Says Aruna Prabhala, a lawyer for the Center for Biological diversity:“We see this as a victory for the Napa forest and its climate.”

In a phone interview this week, Conaway described the Halls’ overall environmental record as “appalling.” He warned that they remain committed to cutting “down thousands of oak trees, among them old oaks that are crucial to holding up the hillsides” on one of the largest remaining undeveloped tracts of oak forest, chaparral, and open meadow in the area.  According to the author, “Napa Valley doesn’t need to lose whatever hillside it has left just to make another $900 cabernet for a billionaire’s vanity project.”

Conaway believes that the Buttigieg event hosted by the Halls illustrates how ultra-rich Californians cultivate friendly Democrats— as candidates for president or county supervisor. “Their wine cave,” he says, “is a wonderful metaphor for the ways in which these people are divorced from the average American.”

Steve Early and Suzanne Gordon live in Richmond, California which has no vineyards but its own problems with corporate Democrats. For more on that, see Early’s Refinery Town: Big Oil, Big Money, and the Remaking of An American City from Beacon Press. The authors can be reached at Lsupport@aol.com