Your Blood Type May Influence Your Vulnerability to Norovirus, the Winter Vomiting Virus

Blood type is dictated by genes that determine which kinds of molecules, called oligosaccharides, are found on the surface of your red blood cells. Norovirus and a few other viruses use these oligosaccharides to grab onto and infect intestinal cells 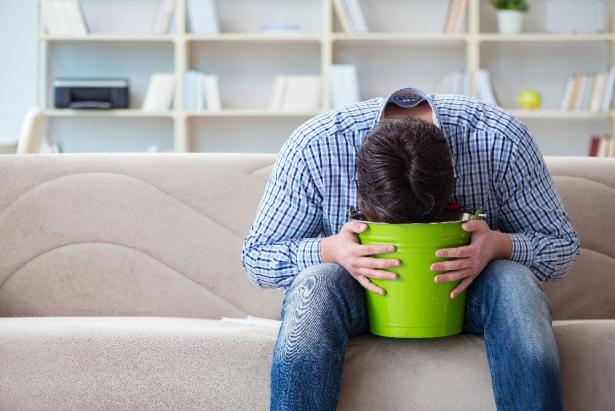 In the last few months, schools all over the country have closed because of outbreaks of norovirus. Also known as stomach flu, norovirus infections cause watery diarrhea, low-grade fever and, most alarming of all, projectile vomiting, which is an extremely effective way of spreading the virus.

Norovirus is very infectious and spreads rapidly through a confined population, such as at a school or on a cruise ship. Although most sufferers recover in 24 to 48 hours, norovirus is a leading cause of childhood illness and, in developing countries, results in about 50,000 child deaths each year.

Interestingly, not everyone is equally vulnerable to the virus, and whether you get sick or not may depend on your blood type. 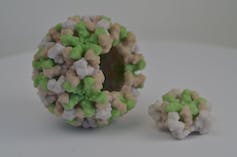 3D print of Norwalk virus, a type of norovirus. Noroviruses are the most common cause of acute gastroenteritis (infection of the stomach and intestines) in the United States. NIH

Norovirus is hard to get rid of

I am a microbiologist, and I got interested in norovirus because, while norovirus symptoms are distressing under any circumstances, my encounter with the virus was particularly inconvenient. During a seven-day rafting trip down the Grand Canyon, the illness passed through the rafters and crew, one by one. Obviously, the wilderness sanitary facilities were not the best to cope with this outbreak. Luckily, everyone, including me, recovered quickly. It turns out that norovirus outbreaks on Colorado River rafting trips are common.

As debilitating as the illness it causes can be, the norovirus particle is visually beautiful. It is a type of virus known as “non-enveloped” or “naked,” which means that it never acquires the membrane coating typical of other viruses, such as the flu virus. The norovirus surface is a protein coat, called the “capsid.” The capsid protects the norovirus’ genetic material.

The naked capsid coat is one factor that makes norovirus so difficult to control. Viruses with membrane coatings are susceptible to alcohol and detergents, but not so norovirus. Norovirus can survive temperatures from freezing to 145 degrees Fahrenheit (about the maximum water temperature in a home dishwasher), soap and mild solutions of bleach. Norovirus can persist on human hands for hours and on solid surfaces and food for days and is also resistant to alcohol-based hand sanitizers.

To make things worse, only a tiny dose of the virus – as few as 10 viral particles – is needed to cause disease. Given that an infected person can excrete many billions of viral particles, it’s very difficult to prevent the virus from spreading. 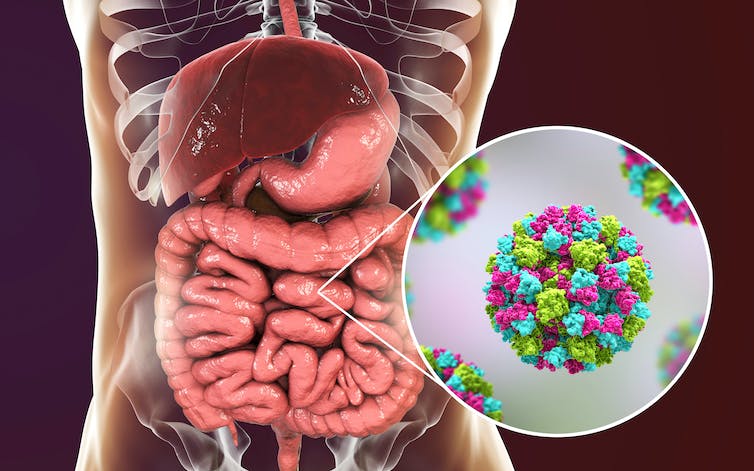 When norovirus is ingested, it initially infects the cells that line the small intestine. Researchers don’t know exactly how this infection then causes the symptoms of the disease. But a fascinating aspect of norovirus is that, after exposure, blood type determines, in a large part, whether a person gets sick.

Your blood type – A, B, AB or O – is dictated by genes that determine which kinds of molecules, called oligosaccharides, are found on the surface of your red blood cells. Oligosaccharides are made from different types of sugars linked together in complex ways.

The presence of one oligosaccharide, called the H1-antigen, is required for attachment by many norovirus strains.

People who do not make H1-antigen in their intestinal cells make up 20% of the European-derived population and are resistant to many strains of norovirus.

More sugars can be attached to the H1-antigen to give the A, B or AB blood types. People who can’t make the A and B modifications have the O blood type.

Each blood type is distinguished by a different sugar marker on the red blood cell. Cells lining the intestine also have these sugar markers. Fernando Jose V. Soares/Shutterstock.com

Norovirus evolves rapidly. There are 29 different strains currently known to infect humans, and each strain has different variants. Each one has different abilities to bind to the variously shaped sugar molecules on the intestinal cell surface. These sugars are determined by blood type.

This difference in susceptibility has an interesting consequence. When an outbreak occurs, for example, on a cruise ship, roughly a third of the people may escape infection. Because they do not know the underlying reason for their resistance, I think spared people engage in magical thinking – for example, “I didn’t get sick because I drank a lot of grape juice.” Of course, these mythical evasive techniques will not work if the next outbreak is a strain to which the individual is susceptible.

Immunity to norovirus is short-lived

A norovirus infection provokes a robust immune response that eliminates the virus in a few days. However, the response appears to be short-lived. Most studies have found that immunity guarding against reinfection with the same norovirus strain lasts less than six months. Also, infection with one strain of norovirus offers little protection against infection from another. Thus, you can have repeated bouts with norovirus.

The diversity of norovirus strains and the impermanence of the immune response complicates development of an effective vaccine. Currently, clinical trials are testing the effects of vaccines made from the capsid proteins of the two most prevalent norovirus strains.

In general, these experimental vaccines produce good immune responses; the longevity of the immune response is now under study. The next phase of clinical trials will test if the vaccines actually prevent or reduce the symptoms of norovirus infection.