What Dreams of Canada Tell Us About Race in America

At a time when American casualties in Vietnam were disproportionately African American, most of those who successfully made it to Canada were white. 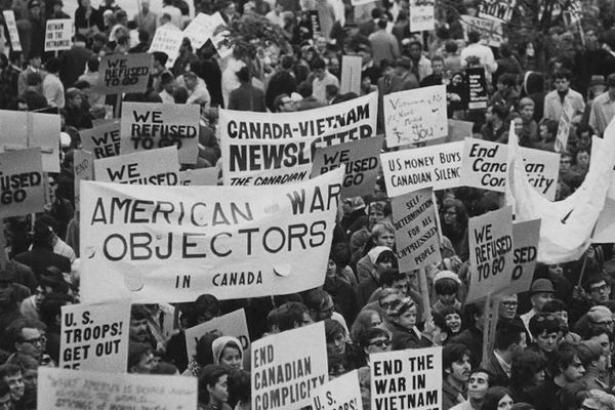 A few days into the new year, Americans awoke to news that the U.S. had assassinated Iranian General Qasem Soleimani. Fears of military conflict with Iran dawned on thousands, search engine hits for “World War 3” soared, and both Iranians and their loved ones in America braced for what might be next.

Although U.S. military personnel overseas were the ones closer to harm’s way, many young people at home in the U.S. immediately wondered if there could be a draft. By 8 a.m. on January 3rd, the Selective Service, which maintains records of those registered for military draft in case of war, was reporting website overload. On social media, users posted memes about leaving for Canada, imagining spontaneous road trips north and draft-safe igloos. Others posted more poignant messages, like the mother of an 18-year-old who sat her son down for “the talk” about moving north if the draft became real. Why does Canada spring to mind so quickly when Americans fear war?

Canada’s unique role in the American imagination comes in part from its very real history as a source of refuge. During slavery, enslaved Africans sang songs with encoded messages of resistance: Follow the north star to freedom, in Canada. That was precisely what thousands of enslaved people did, founding Canada’s largest early Black community.

One hundred years after slavery’s official end, a new generation of Americans sought refuge in Canada. Their goal was to escape participation in the Vietnam War and they couldn’t help but see themselves as a modern-day version of that underground railroad, writes historian Wendell Adjetey. What resulted over the next decade was a massive, highly organized project to resist the war by draining the U.S. military of its human power.

Roughly 50,000 men are estimated to have made it out of the draft’s crosshairs by fleeing to Canada. Female activists, although exempt from the draft, approached their political role with equal seriousness, sometimes posing as partners of male resisters to help them cross the border without arousing suspicion. Volunteers in both countries threw themselves into the work of helping young people get to Canada: staffing hotlines, counseling youth about their options if drafted and putting them in touch with people and resources to make the journey to Canada go smoothly. Canadians put pressure on their government, staging clever border actions to demand immigration officials welcome a larger number of resisters.

But when it came to the Underground Railroad analogy, there was one problem. At a time when American casualties in Vietnam were disproportionately African American, most of those who successfully made it to Canada were white. Other racialized groups among the resisters in Canada are scarcely discussed in sources on the period.

The experience of Black resisters in Canada was fraught. While attempting to cross the border, they faced scrutiny that white resisters did not. For those who made it in to Canada, adapting to their new country was difficult and blending in was impossible. Local demographics, art and culture felt so white that resister Eusi Ndugu compared arriving in Canada to “jumping into a pitcher of buttermilk…There’s a race problem here, just like in the Northern cities of the U.S.” Although Canadians were polite, Black resisters could sense a “subtle anti-Black bias” – not just among locals, but among white resisters, as well. 3

To combat their alienation, Black resisters took matters into their own hands. In 1970, a small group of them founded BRO, the Black Refugee Organization. BRO members helped newer arrivals meet their needs and worked out a plan to match African-American resisters with local Black Canadian families - which involved bridging cultural gaps with a now predominantly Caribbean community. Yet very few Black resisters ultimately remained in Canada. BRO members soon urged Black resisters still in America to “stay there if it is at all possible – do what you can to resist there.”

The experience of white resisters was worlds apart. For many, Canada became a new home; a place to reinvent themselves among like-minded peers and create lives of meaning. Canadians welcomed them warmly; even government officials later called the influx of war resister immigrants “the largest, best-educated group this country ever received.” When a 1977 amnesty allowed draft evaders to return home without punishment, thousands chose to stay in Canada.

Resisters of all races went to Canada because they were worried for themselves – but also because of their horror at what was happening to Vietnamese civilians. For a generation whose political awakening had begun with Civil Rights, it was difficult not to see bombing and napalming brown-skinned Vietnamese civilians as a racist war. Many early anti-war activists had learned their tactics of non-violent civil disobedience from Civil Rights work. The young Black activists of the Student Nonviolent Coordinating Committee led the way in making this connection between war and racism explicit. Dr. Martin Luther King, Jr. soon followed, gradually making his opposition to the war more visible in his Civil Rights work.

The desperation that many young people felt about stopping the war was summed up by the words of 22-year-old Civil Rights activist Mario Savio. Three months before the deployment of U.S. combat troops to Vietnam, the young Italian-American cried out to student protesters, “There's a time when the operation of the machine becomes so odious, makes you so sick at heart, that you can’t…even passively take part. And you've got to put your bodies upon the gears and upon the wheels…and you've got to make it stop.”

For a decade during the Vietnam war, young Americans tried every means they could think of to stop that machine. They sabotaged it by destroying draft records, stood in its way by blockading the trains that moved troops, and made it difficult for napalm manufacturers and recruiters to show their faces in public. By going to Canada, thousands attempted to remove themselves from the machine’s gears entirely. Yet none of them could escape the way that, in the end, racism shaped their available options.

Leaving America surely saved some resisters’ lives. But the machine they fought is still at work. It is held together by the message that some lives –at home and abroad –count as less human than others. A new generation will now face the question of how to dismantle it.

April Rosenblum writes about race, class, Jewish identity and movement-building. She is at work on a microhistory of Black/Jewish relations. Her essays have appeared in The Washington Post, Class Lives: Stories from Across Our Economic Divide, The International Encyclopedia of Revolution and Protest, Righteous Indignation: A Jewish Call for Justice, Bridges and Afn Shvel. Twitter: @homeandfreedom

Welcome to the History News Network (which is popularly known as HNN).

Our mission is to help put current events into historical perspective. Given how public opinion is shaped today, whipsawed emotionally on talk shows this way and that in response to the egos of the guests, the desire for ratings by the hosts and the search for profits by media companies and sponsors, historians are especially needed now. They can help remind us of the superficiality of what-happens-today-is-all-that-counts journalism.

Each week HNN features up to a dozen fresh op eds by prominent historians. Our archives, extending over the past decade, include thousands of well-researched pieces.

Even those who profess utter indifference to history are beholden to it. History is inescapable. Who we are and how we react to events depends, to a great extent, on our past. As Eugene O'Neill has a character in Long Day's Journey into Night exclaim, at a critical juncture,"The past is the present, isn't it? It's the future, too. We all try to lie out of that but life won't let us." Our motto at HNN reflects O'Neill's insight:"History News Network ... Because the past is the present, and the future, too."

Journalism is said to be the first draft of history. But journalists traditionally have had little use for historians. The list of occasions on which journalists feel compelled to call upon historians is short. Though a select number of historians recently have become media stars, the fact remains that few are publicly quoted, and hardly any are given the public platform regularly awarded economists, political scientists or pollsters. The last historian trusted to take a large and visible role in a national administration was Arthur Schlesinger, Jr., and that was some fifty years ago.

Among the many duties we assume are these: To expose politicians who misrepresent history. To point out bogus analogies. To deflate beguiling myths. To remind Americans of the irony of history. To put events in context. To remind us all of the complexity of history.

Because we believe history is complicated our pages are open to people of all political persuasions. Left, right, center: all are welcome.