When 250,000 people die every year from poverty, it is time for the presidential candidates to make good on the promises they made during the Poor People’s Campaign Moral Action Congress in June 2019 to push for a debate on poverty. 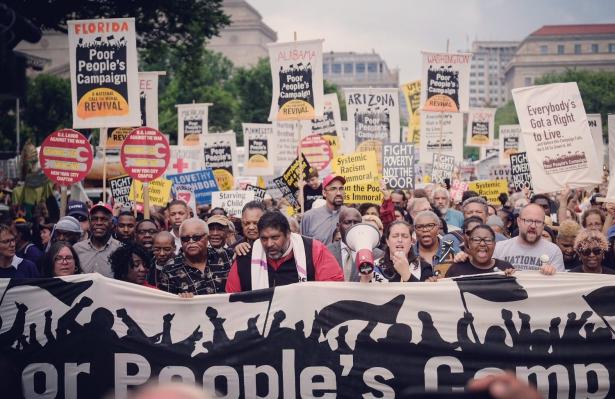 Last Tuesday, we marched on the Democratic Debate, uplifting the struggles and demands of the 140 million poor and low wealth people in our nation, while demanding a full, nationally-televised, primetime debate on poverty and the interlocking injustices of systemic racism, ecological devastation, militarism and the war economy, and this country’s distorted moral narrative of Christian Nationalism.

When 250,000 people die every year from poverty, it is time for the presidential candidates to make good on the promises they made during the Poor People’s Campaign Moral Action Congress in June 2019 to push for a debate on poverty. We are sending letters to both the Democratic and Republican National Committees, calling on both sides of the aisle to have a debate on poverty in both the primary and during the general election.

CALL TO ACTION: Click here to send a letter to the DNC and all of the presidential candidates to amplify our demand for a full, primetime, nationally-televised presidential debate during the primary on poverty.

Our protest was covered by Democracy Now and led to two mentions of the Poor People’s Campaign on the national debate stage, as well as a massive wave of people visiting our national website and reading our Moral Agenda.

On this Martin Luther King, Jr. Day, we commit ourselves to carrying forward the unfinished work of uniting poor and impacted people into a new and unsettling force. This is how we choose to honor the life and vision of our forebears – by reaching back into history and carrying the baton of justice another step forward together.

A large block of the voting public will stay at home on election day if the issues that affect poor and low wealth Americans are not brought to the forefront. We’ve had nearly 30 debates since 2016 alone, and not one of them has focused on poverty. A mere mention of the Poor People’s Campaign on the debate stage or on social media will not quiet our call for a full debate on poverty. We demand that all presidential candidates and the Democratic National Committee host a #PovertyDebateNow!

If you are on Twitter, click here for our brief social media toolkit to put pressure on the candidates and the DNC, including handles, hashtags and sample tweets.

Thank you for doing your part to make our voices heard!

The Poor People's Campaign: A National Call for Moral Revival