Baker was a strategist, organizer and mother to the movement whose political acumen, humble leadership style and razor sharp political insights were legendary. 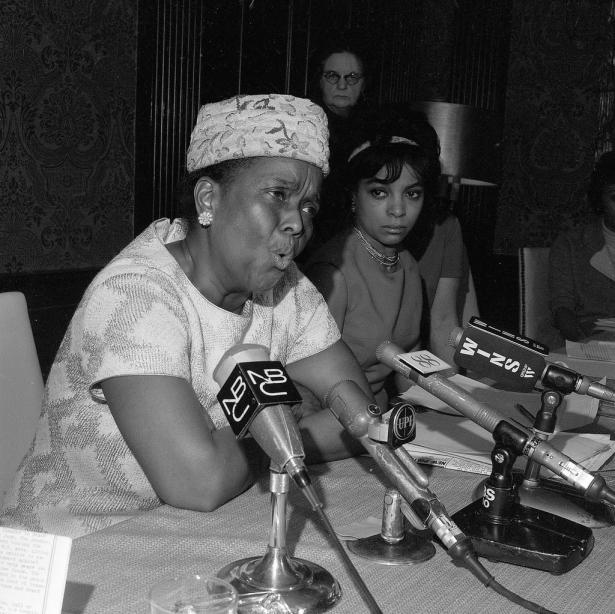 Ella Baker at a news conference in 1968.,Jack Harris/Associated Press

When the Rev. Dr. Martin Luther King Jr. accepted the Nobel Peace Prize in Oslo in 1964, he observed that anytime an award is given to “the dedicated pilots of our struggle who have sat at the controls as the freedom movement soared into orbit,” the prize is also bestowed on “the ground crew without whose labor and sacrifices the jet flights to freedom could never have left the earth.”

Ella Josephine Baker, a black North Carolina native who migrated to New York in the 1920s, was a major part of that ground crew for over 50 years, and her legacy lives on in today’s social movements.

Her political activism began in Harlem in the 1930s. She worked with the cooperative movement during the Great Depression; supported the campaign against Italy’s invasion of Ethiopia; and opposed the racist conviction of the famed Scottsboro boys.

Baker was a field secretary and director of branches for the N.A.A.C.P. in the 1940s, and she traveled throughout the Jim Crow South, organizing against discrimination and recruiting people to the Civil Rights Movement. She worked alongside King and others in the Southern Christian Leadership Council in the 1950s and was a mentor to the young activists who founded the Student Non-Violent Coordinating Committee in 1960. S.N.C.C. went on to lead the “Freedom Rides,” in which participants risked life and limb to desegregate interstate transportation, and then to organize “Freedom Summer,” a massive voter registration drive targeting disenfranchised black southern voters.

Baker was a strategist, organizer and mother to the movement whose political acumen, humble leadership style and razor sharp political insights were legendary. It’s a reflection of our selective amnesia that few people know her name. The S.N.C.C. leader James Forman once remarked that “many people helped to ignite or were touched by the creative fire of S.N.C.C., without appreciating the generating force of Ella Baker.”

In this crucible election year, Ella Baker’s work with the Mississippi Freedom Democratic Party may be the most relevant. The party, formed in the early 1960s by black residents and a few white allies, was a brave political experiment in one of the most notoriously racist states in the south, where lynchings and other acts of racial terror were commonplace. In 1963, Medgar Evers, the Mississippi field secretary for the N.A.A.C.P. was killed. The following year, three young civil rights workers were killed. Many African-Americans had been killed in Mississippi before that, most notoriously Emmet Till, a 14-year-old who was visiting from Chicago in 1955.

At a contentious 1964 Democratic Party convention in Atlantic City, N.J., its impact was felt. The delegation, which had formed through an open nondiscrimination process in the state, posed a challenge to the racist all-white delegation that had excluded Mississippi’s black citizens. The mainstream Democrats had a dilemma: concede to the white Dixiecrats, who had long been part of their base, or embrace the principled challenge raised by the Mississippi Freedom Democratic Party and oppose segregation and disenfranchisement. That is, to embrace a true freedom agenda.

The Democrats tried to engineer a compromise but eventually capitulated to the status quo. While the Mississippi Freedom Democratic Party was not seated at the convention, their efforts set the stage for the passage of the Voting Rights Act the following year and for reforms that made future Democratic Party conventions more diverse. Ella Baker was at the center of the fray as the director of the Mississippi Freedom Democratic Party’s Washington office, and she worked tirelessly to build support for the challenge that emerged in Atlantic City.

Throughout her life, Baker insisted on the importance of grass-roots leadership. “Strong people don’t need a strong leader,” she declared, warning activists to eschew messiahs and saviors and build local leaders by the thousands. “Martin didn’t make the movement,” she said. Rather, “the movement made Martin.” She did not mean this to be a disparaging assessment but a hopeful one. The strength and determination of ordinary people and the power of the organizations they build together are the locus of the power that fuels change, power that is bigger than any one individual, no matter how charismatic or committed.

And she knew that individuals were vulnerable. Two of her friends, the N.A.A.C.P. organizers Harriette and Harry Moore, were blown up in their home on Christmas Day 1951 by the Ku Klux Klan. And King would later be tragically assassinated.

Ella Baker was not interested in elite strategy sessions or flowery oratory. She was about the hard, unglamorous work of building relationships, mobilizing communities, developing campaigns and creating new organizers. She was a mentor to Representative John Lewis of Georgia; Stokely Carmichael (Kwame Ture); Representative Eleanor Holmes Norton of Washington, D.C.; Marian Wright Edelman, the president emeritus of the Children’s Defense Fund; Joyce Ladner, the former president of Howard University; and the social activist Julian Bond. One of her closest political protégés was Bob Moses, the Algebra Project founder and a MacArthur Genius Award recipient. Her legacy runs deep.

I hesitate to speculate what activists from earlier eras, like Ella Baker, who died in 1986, might do or say today. Still, I am pretty confident that if she were with us in 2020, Baker would be on the side of the growing racial and social justice movements that are decentralized and engaged in mass direct action tactics: the climate justice movement, the immigration rights and antiwar movements, the Poor Peoples’ Campaign, and the groups that comprise The Rising Majority coalition; all of them doing work that foregrounds the interests and voices of members of the most long-suffering and marginalized sectors of our society.

Ella Baker has many political heirs today, people who carry on in the defiant spirit of the Mississippi Freedom Democratic Party. They are the young people who make up the grass-roots of the Bernie Sanders and Elizabeth Warren presidential campaigns, full of zeal, passion and determination to forge a new kind of national politics; the freshmen congresswomen known as “the squad,” who are working within the Democratic Party but not on the condition of silence or unprincipled compliance; and the activists in groups like the Working Families Party and the Justice Democrats supporting “outsider” progressive candidates in local elections from Philadelphia to Chicago.

In July, the Democratic Party will host its 2020 convention in Milwaukee, and Ella Baker’s “fighting spirit” will be very present. Hopefully, this time it will be the forward looking progressives rather than the “play it safe” centrists who win the day and make Ella Baker proud.

Dr. Barbara Ransby, a historian, is the author of “Ella Baker and the Black Freedom Movement.”