How Senate candidate Sarah Riggs Amico, running against ex-CEO David Perdue in Georgia, sacrificed her family business investment to save jobs and pensions 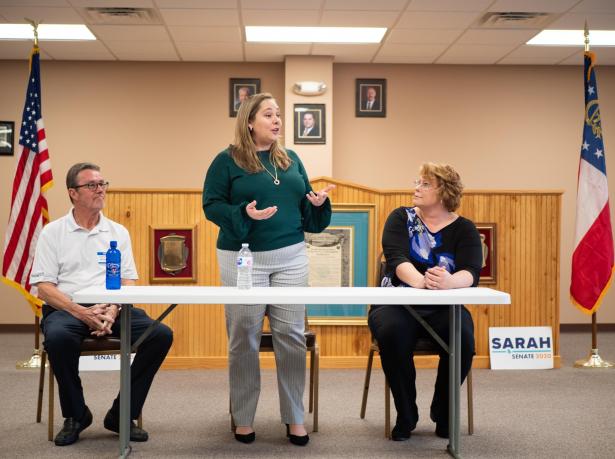 Of the 100 senators desperately tying to pretend they’re listening to the impeachment trial, the most anonymous is Kelly Loeffler. The ex–financial executive with a net worth of $500 million has been serving for less than a month, after Georgia Governor Brian Kemp selected her to fill the seat of Johnny Isakson, who retired over health issues. The choice was controversial, as President Trump favored House Judiciary Committee ranking member Doug Collins, his ally in the impeachment inquiry.

Collins has intimated that he may challenge Loeffler in November, when all candidates face off in a jungle primary election. But despite Loeffler’s inexperience and the potential for a conservative civil war, the race has merited little Democratic enthusiasm. The most high-profile Democrat running is Joe Lieberman’s son Matt, who has never held elected office. (Loeffler, the wealthiest member of Congress, promising $20 million of her own money to her campaign may have something to do with this.)

Before politics, Perdue was CEO of three different companies, including chain store juggernaut Dollar General (which during his tenure faced numerous allegations of gender pay discrimination). He repeatedly touts his business experience as preparing him for government. But one of his challengers in the Senate race is also pointing to her business record—one that foregrounds actual compassion for the middle class, and sacrifice from those at the top.

Sarah Riggs Amico was the Democratic lieutenant governor candidate in 2018, on the ticket with Stacey Abrams. But throughout her run, she served as executive chairperson at Jack Cooper, one of North America’s biggest car-hauling companies, with over 3,000 employees, most of them affiliated with the Teamsters union. Amico’s family acquired the company in a 2009 merger; she joined the board in 2011 and became chair in 2014.

One of David Perdue’s challengers in the Senate race is also pointing to her business record—one that foregrounds actual compassion for the middle class, and sacrifice from those at the top.

“We were at the front lines of the auto industry collapse and comeback,” Amico told the Prospect in an interview. “From the beginning we were in turnaround mode.” Her potential opponent Perdue was seen as a turnaround artist in his executive career. But the similarities end there.

Jack Cooper hit another difficult period after Trump’s steel and aluminum tariffs rippled through automotive markets and caused heartburn for downstream suppliers. Automakers shifted to non-union carriers, an emerging trend in car-hauling, to save money. Debt piled on Jack Cooper’s balance sheet. The company pension, part of the embattled Central States fund, only added to the uncertainty.

“We found ourselves with the ultimate dilemma,” Amico said. “Do you hobble along, knowing you close the doors when the pension fund goes under? We went in and said these are people who did nothing wrong, and it’s worth saving their jobs.”

Jack Cooper filed for Chapter 11 bankruptcy protection last August. The three-month restructuring deal ended up preserving all 3,000 jobs, with no wage cuts. The company continued to pay employee health care premiums at 100 percent. All past pension obligations were honored; a reduction to future company contributions of $150 a week was the only real concession. Investments in workers and equipment were written into the contract.

Most astonishingly, Amico and the family owners gave up their entire direct investment in the business, using those funds to save jobs and pensions. “I spent a year and a half campaigning, talking about how you treat other people and how you lead,” Amico said. “And how our company was different. And here was a moment to show it.”

The decision earned respect among the rank and file. “They are more concerned with the welfare of their employees than how much money they can stack up in the bank,” said E.J. Childs, a transport safety and yard supervisor at Jack Cooper. 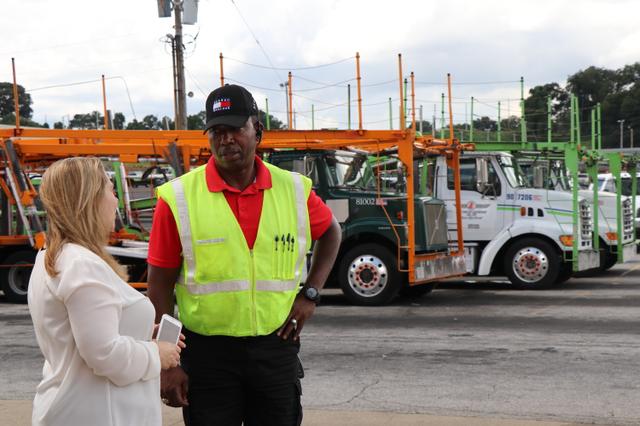 Amico announced earlier this month that she would leave her position at Jack Cooper to commit to the Senate run. Her story comes on the heels of renewed thinking about the business world’s responsibility to more than just shareholders. But members of the Business Roundtable have mostly talked about broadening that responsibility to workers and communities; Amico actually executed it. And that’s how a businesswoman can secure an unusual amount of blue-collar support; she’s received endorsements from IBEW and Bricklayers locals.

“They could have turned their backs on 3,000 families,” said Kevin Moore, president of Teamsters Local 299, who negotiated the deal with Jack Cooper. “They could have walked away and been millionaires. But they put their family fortune on the line and relinquished power. Their sole commitment to us was, let’s find a way to keep the jobs. Not many corporations say that.”

Though Moore lives in Detroit, he plans to campaign for Amico. “It’s a breath of fresh air to have a woman able to talk the talk, walk the walk, and fight for working families.”

Amico has foregrounded her story at a campaign mini-site. She contrasts her experience with some of Perdue’s executive decisions. Like Amico, Perdue found himself running a company, textile firm Pillowtex in North Carolina, with a high debt load and pension liabilities. Unlike Amico, he walked away from the firm in 2003, making off with $1.7 million in compensation for just nine months on the job. Soon after it closed, with 7,650 workers laid off.

The pension crisis, which Amico was able to avert for her employees, really animates her. So-called multi-employer plans, which serve truck drivers, construction workers, and others who go from job to job, are in dire straits, with over 44 percent of them at risk of collapse. That translates to 4.6 million retirees. The House passed legislation in July to save multi-employer pensions, but the Senate has done nothing. “I sat across the table from people who drove a truck for 34 years,” she said. “Think about what [Congress] has done to bail out banks, the auto industry, wealthy donors with a trillion-dollar tax cut.”

Other candidates in the Senate race are taking positions that are pretty liberal for Georgia, a sign of the changing politics of the state. Ted Terry got city employees a $15 an hour minimum wage in Clarkston and decriminalized marijuana there; Tomlinson supports both of those positions as well. Though Ossoff ran a pretty centrist campaign for a high-profile swing congressional seat, he’s aligning with more progressive stances now.

But you don’t hear many stories in the Second Gilded Age about business executives sacrificing their own investments for the greater good. You’re even less likely to see a politician literally running on how she took her company through bankruptcy. Amico seems sincerely committed to upending the now-hackneyed concept of what it means to run the country like a business.

“The economy doesn’t work for everyone,” Amico told me. “If you put me up against David Perdue, we will have a conversation about capitalism.”

David Dayen is the executive editor of The American Prospect. His work has appeared in The Intercept, The New Republic, HuffPost, The Washington Post, the Los Angeles Times, and more. His first book, Chain of Title: How Three Ordinary Americans Uncovered Wall Street's Great Foreclosure Fraud, winner of the Studs and Ida Terkel Prize, was released by The New Press in 2016.