Is he relevant today beyond his reputation as a comic icon? 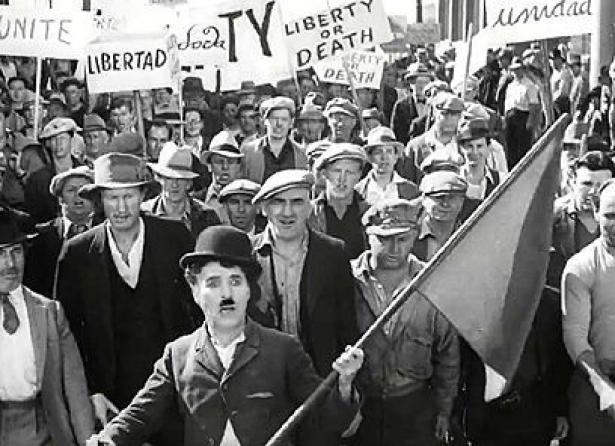 Acrobat, musician, composer, clown, mime, movie star, director and producer, Academy Award winner for lifetime achievement, but still driven from the United States for his backing of the Soviet Union, Charlie Chaplin should need little introduction, except perhaps for Millennials and other late alphabet generations. He was the global star in the crossover from silent films to talkies, making an astonishing $10,000 a week during the Depression, with $150,000 in signing bonuses. Knighted by the Queen, Charlot was universally loved and admired.

But is he relevant today beyond his reputation as a comic icon?

During a recent visit to the magnificent Manoir de Ban near Lausanne, Switzerland, which was his home from 1952 until his death in 1977 and now houses a museum in his honor, I was impressed how his films were political, and how they speak to today’s human rights agenda.

In 1954 Chaplin was awarded the International Peace Prize by the World Peace Council for his outstanding contribution to the cause of peace and friendship among nations. Who can forget his mocking of Hitler in The Dictator when he spins a globe and dances with the world at his fingertips?)

Two examples from his classics show how his films relate to human rights:

The 1921 production The Kid is the story of an unwed, down-and-out mother who abandons her child because she cannot afford to look after him. She places him in an expensive car with a note to the owner to take care of him. After some intrigue, a tramp, Charlie Chaplin, finds the boy and raises and loves him like his own, cementing the idea of the kindness of the fellow impoverished. The tramp and the kid work together against the moneyed class; the kid breaking windows and the tramp repairing them.

The kid is eventually taken away from the tramp by the authorities – border police separating children from their loved ones on the U.S. southern border? – to be returned to his mother. In the end, the kid, the tramp and the mother are re-united.

The Kid was chosen to be preserved in the Library of Congress’s National Film Registry in 2011. It was praised as “an artful melding of touching drama, social commentary and inventive comedy.” The social commentary is what today we would call human rights: the right to a decent life for the mother when she is poor; the right for the mother to have minimum support to raise her boy and not to have to abandon him; the right of the tramp to have a decent wage for his job so he would be able to live properly without having to use illegal means to earn a living; the right to have proper housing for the tramp and the kid; the right to have affordable medical care; the right for the boy to stay with the tramp instead of being sent to an orphanage.

All of these we would call basic social, economic and cultural rights. They are at the heart of Chaplin’s advocacy; they are what make the film so endearing and why we are so relieved when the tramp, kid and mother unite at the end to live happily together. According to Chaplin, and The Kid, there is justice in this world. The good guys overcome injustices and the cruel indifference of the rich with their expensive cars (a foreboding of the 1%?). Although the mother became a rich actress, she takes in the tramp to form a supportive family for the kid, re-uniting him with her son (without the son’s losing the support of the foster father who had raised him, a win-win situation that no family judge could have better decided).

And how does Modern Times, Chaplin’s critique of industrialization, relate to human rights and our modern times of numeric technology? The tramp in Modern Times is a factory worker slaving away on mechanical assembly line. Is this different from today’s information workers tied to their computer screens, forced to work at accelerated speeds as the information flow gets faster and faster, like the quickening assembly line? The hero suffers a nervous breakdown after which he is unemployed, again suffering from having no unemployment insurance or other benefits to carry him over. He is mistakenly arrested with no legal recourse but wishes to stay in jail since he has had no vocational training and is living better in jail than in the street.

The remainder of the film deals with his romance with a fellow hobo who is fleeing punishment because she stole a single loaf of bread (proportional justice?). The film recounts the couple’s various adventures to escape poverty and the desperation of those with no guaranteed income, no right to food or right to housing. Whenever authorities are presented, they are unsympathetic. The poor have no recourse to representation and are left to their own devices to survive. The police – the authorities – are constantly trying to arrest the downtrodden who must seek refuge outside the authoritative system. There is no hope for them within the system; they are left to their own devices in a world with no guaranteed rights.

There is little justice in Modern Times in terms of a happy ending where the heroes overcome injustices. At the end, there is only the love between Chaplin and Ellen. But in the film, as in The Kid, struggles of the underclass represent all the injustices that the 99% of the world today must endure. While economic inequality continues to grow, Chaplin’s films have an important lesson of the struggles of the disenfranchised if one can view the horrors of industrialization and the Depression in our modern context. When 26 individuals are worth as much as 50% of the world’s population, Chaplin’s comic/tragic hero is a pertinent reminder of what it means to live in poverty.

The Manoir de Ban is a beautiful domaine with a lovely park and spectacular view of Lake Geneva. Chaplin died a very rich man. His vision of and advocacy for the poor should remain his greatest legacy. A visit to his museum is a reminder of the schism between the haves and have nots and how a talented, rich genius was able to give such a profound representation of all those who couldn’t afford to live in Vevey and to have the human rights he and many of us enjoy.

Daniel Warner is the author of An Ethic of Responsibility in International Relations. (Lynne Rienner). He lives in Geneva.

CounterPunch Magazine is published six times per year and is only available for those who subscribe. The magazine is available both in print form, sent by US Mail and as an email edition sent as a PDF.