Over months of contract bargaining, Harvard reached common ground with the union on some issues. But over the course of a recent strike, the university began to lash out in punitive and ominous ways. 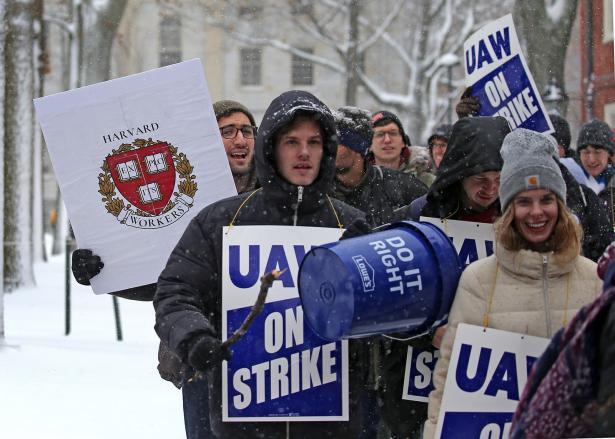 At the beginning of January, thousands of graduate teachers and researchers at Harvard University returned to work after a contentious, month-long strike, with potential consequences for American workers reaching far beyond Cambridge. The Harvard Graduate Students Union (HGSU), a United Auto Workers affiliate that comprises roughly 4,500 student employees, has—together with unions at Columbia and NYU—been at the leading edge of a movement of academic workers that has swept the country over the last decade, and in 2018 it won one of the largest successful unionization elections in recent history. Over months of bargaining, Harvard reached common ground with the union on some issues—such as agreeing to provide student workers with the workspace and materials they require to do their jobs—while giving little on the central questions of wages, health care, and protections against harassment and discrimination. But at the same time, over the course of the strike, the university began to lash out in punitive and ominous ways.

The issues at stake for Harvard’s student workers are serious. Cambridge is one of the most expensive cities for renters east of the Rockies, with a median monthly rent for a one-bedroom apartment of $2,500. Contrary to stereotype, graduate employees are not kids; they are commonly in their thirties, getting by on wages under $20 an hour. Many have children or other dependents, as well as student loans, chronic health issues, and all the other financial challenges of adulthood in 2020. With long-term, tenure-track hiring in steep decline across academic fields, these conditions can no longer be justified as an unpleasant apprenticeship leading to a cushy tenured sinecure in the ivory tower.

Moreover, members of the union have good reason to be skeptical of Harvard’s commitment to preventing and redressing sexual harassment, which emerged as the strike’s central issue. The university acknowledged recently that it knowingly protected and even promoted a professor named Jorge Domínguez for decades, despite an accumulation of sexual harassment accusations from eighteen different people. (Domínguez was finally barred from campus and stripped of his emeritus status last year.) In a 2019 survey by the Harvard administration, 39 percent of all enrolled students reported experiencing sexual harassment on campus.

HGSU is calling—in keeping with other unionized graduate schools—for an independent grievance procedure, in addition to the existing Title IX process, which, however carefully crafted and sedulously implemented, is nevertheless finally controlled by an administration whose past actions make it impossible for many students and survivors to trust it. The proposed grievance procedure, by contrast, is independent by its very structure: its costs are shared by the union and the university. This procedure also includes a final step where a neutral arbitrator makes a decision about whether an instance of workplace harassment has taken place. This contractual right is enjoyed by tens of thousands of student employees across the nation, whether at NYU, the University of Michigan, or the University of California system. Harvard has refused to entertain this proposal.

What is more, the university has resorted to tactics that make the strike and its aftermath a matter of broader public concern. As the strike paralyzed campus, preventing deliveries, causing the cancelation of exams, and delaying the submission of grades, Harvard pressured departments to name individual strike participants. The demand that faculty step into managerial positions and do the administration’s union-busting for it opened strikers to much more individualized retaliatory threats, since faculty members, unlike administrators, are directly responsible for course supervision and dissertation advising. When many departments refused to inform on their students, the administration gave departments a new assignment: report the number of strikers to the central administration. This set up departments with high numbers of strikers for potential retribution, whether lower numbers of graduate fellowships or fewer opportunities to hire new faculty.

Then, eight days into the strike, the administration made perhaps its most disturbing and potentially far-reaching move: it attempted to make employment conditional on non-participation in strike action—a condition that it sought to extend into the new semester, starting this week. The Office of Provost Alan Garber sent guidance to department administrators stating that job assignment letters should demand of the worker “whether you will commit to starting employment on that date if the strike is continuing.” Some departments refused to send these contracts, and in others student employees responded by stating that they couldn’t promise not to strike. (While the administration has not yet insisted that departments include this clause, neither have they disavowed it—it remains in their arsenal of union-busting techniques.)

This apparently simple procedure, in which the employer predicates employment on a worker’s non-participation in union membership or strike action, has a long history. It is called a “yellow dog contract”—because only a scared worker (a “yellow dog”) will sign one, and fear is what it aims to induce. Such contracts were widely used in the late nineteenth and early twentieth century to intimidate workers. To keep their jobs, they would have to sign these agreements, which courts would enforce through injunctions. Under the rule of the yellow dog contract, millions of workers were, in meaningful ways, unfree. Gathering the individual names of strikers, too, is redolent of the old anti-union practice of the blacklist—on which any coal miner who refused to sign the yellow dog contract would find himself.

Workers and their allies struggled bitterly against these practices, which, they argued, constituted a violation of the basic freedoms of the Bill of Rights. Miners fought—and died by the hundreds—all through the 1910s and 1920s in labor conflicts centered around the yellow dog contract. Justice Louis Brandeis denounced the device in a famous 1917 dissent. Harvard Law Professor (and future Supreme Court Justice) Felix Frankfurter coauthored a book addressing the subject in 1930, in which he described the yellow dog contract as “a serious threat to the very existence of labor unions.”

Some yellow dog contracts historically forbade the worker from joining a union. Others, working more subtly, suppressed the right to strike, as Harvard’s does, and as such suppress freedom of association. When a yellow dog contract shuts down strikes, observed economist Joel Seidman in 1932, “the formal right to belong to a union is wholly valueless.” Republican Senator George Norris came to consider the practice “involuntary servitude” after a tour of coal districts in Pennsylvania, a state he described as a “great bastion of entrenched privilege.”

Norris co-sponsored a bill with Fiorello LaGuardia (with the text drafted by Frankfurter, along with Harvard colleague Francis Sayre) to ban the yellow dog contract. The Norris–LaGuardia Act, passed in 1932, is older than virtually all other functioning American labor law. It marks the first general commitment of the United States to the principle that workers should be free and equal citizens able to raise their voice in their own cause. In principle all yellow-dog contracts were from that date forward illegal. The right was further operationalized and made enforceable by the National Labor Relations Act, passed three years later, which established the National Labor Relations Board (NLRB) to guard workers’ freedom of speech and association.

However, because student employees at Harvard voted to unionize under a federal ruling since undermined by the Trump administration, they have found themselves in a situation strikingly parallel to the coal miner trapped by the yellow dog. Where coal bosses enjoyed a business-friendly judiciary, which considered all unions to be conspiracies, Harvard has the Republican-controlled National Labor Relations Board, which considers graduate employees to be students, not workers with rights under the Norris–LaGuardia Act or the National Labor Relations Act. The effect is the same.

Despite incessant warnings about the threat that student activists pose to free speech on campuses, here we see a university administration attempting to undermine First Amendment freedoms. The move to strip graduate employees of basic rights to protest and freely associate reduces them in effective legal terms to a semi-feudal position of dependence. Given that this intimidation is occurring against the background of a conflict in which a central issue is the vulnerability of graduate employees to sexual harassment, the dangers of such a dependence should be obvious to any reasonable observer.

Student workers are not alone, however, in being trapped in a legally hazy category of employment: this situation now encompasses tens of millions of workers of countless types—from farmworkers to Uber drivers to charge nurses. As these new categories of employment unprotected by law have proliferated across the economy, they have made workers vulnerable once more to previously outlawed infringements on their rights.

Such infringements raise a profound concern. Do those at the bottom of the economy still deserve all the rights of the democratic citizen, or does their presence on the employer’s property have the effect of muzzling them and depriving them of some of those fundamental rights? The tens of millions of workers who have either been made to sign non-disclosure and mandatory arbitration agreements, held captive by non-compete clauses, or miscategorized as independent contractors (and thus prevented from organizing themselves into a union) bear witness to the creep of coercive contracts back into mainstream employment practices. In this regard, the reappearance of the yellow dog, under the cover of an increasingly authoritarian presidential administration, should be greeted with alarm.

“If they go on making human relations into property relations,” warned the leader of the Seamens’ Union in congressional testimony in 1928, “the Thirteenth Amendment to the Constitution will be evaded, circumvented and dead.” Harvard is attacking freedoms so basic that we have forgotten how hard-won they were. The defeat of the yellow dog contract was one of a handful of moments in the twentieth century that marked the arrival of a more fully realized democracy in modern America—alongside women’s suffrage and civil rights and voting rights legislation. By attacking a crucial plank of that progress, Harvard University is advancing the overall assault on democratic citizenship we witness daily. It may come from the “great bastion of entrenched privilege,” as Senator Norris described Pennsylvania—land of yellow dog contracts a century ago—but it is an attack on the freedom of all working Americans.

The Harvard strike came to a close on December 31, with the end of fall semester. As of last week, the union is negotiating with the hope of reaching an agreement by the end of January, and the administration’s demand for yellow dog contracts is, for the moment, in abeyance. But the union and the administration appear far apart on the core demands, another strike is certainly possible, and, despite the earlier outcries, the university has not disavowed the Provost Office’s push for yellow dog contracts. It is the right to strike that is the real constitutional right under threat on campus.