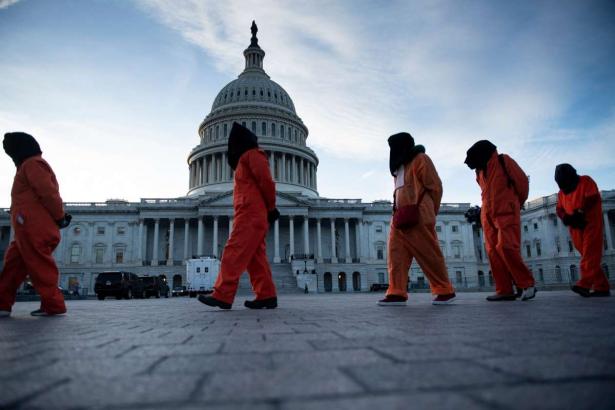 Demonstrators dressed in Guantanamo Bay prisoner uniforms march past Capitol Hill in Washington, D.C., on January 9, 2020, during a "No War with Iran" rally., Brendan Smialowski / AFP via Getty Images

Forty men still remain detained at the Guantánamo Bay prison camp 18 years after it opened on January 11, 2002. Only seven of them face charges, including five prisoners accused of involvement in the 9/11 attacks in New York City and Washington, D.C., in 2001.

With the start date for their trial set for January 11, 2021, ongoing pretrial hearings in their case are focused on the permissibility of evidence obtained through torture in CIA custody, which would not be a consideration in normal court proceedings. As part of the hearings, the two independent contractor psychologists who designed the CIA’s torture program for $80 million are due to testify as witnesses later this month.

More prisoners have died at Guantánamo than have been convicted by the military commissions. Some of those convictions have been successfully overturned, but it is not an easy process. Canadian former child prisoner Omar Khadr initially filed his appeal in 2013. Torture evidence was used in his 2010 military commission trial, and he completed his secret plea bargain sentence in March 2019. His U.S. lawyers are now seeking to force the hearing of his appeal against his conviction by the U.S. military appeals court. Nonetheless, the U.S. government has continued to delay the hearing, initially by failing to respond to the suit, and later claiming the delay is reasonable.

Secretary of State and former CIA Chief Mike Pompeo’s dismissal as “fiction” of The Report, a film about the heavily redacted 2014 Senate Intelligence Committee report into CIA torture, thus comes as no surprise. President Trump’s is the third administration to endeavor to keep the details of the CIA’s torture program as secret as possible.

More worrying, however, are attempts by Trump’s administration to prevent investigation into the CIA’s use of torture and arbitrary detention by the International Criminal Court (ICC) as part of a broader investigation into war crimes committed in Afghanistan. In March 2019, Pompeo threatened economic sanctions and imposed U.S. visa restrictions against ICC investigators, leading to the revocation of the visa of ICC Prosecutor Fatou Bensouda. The ICC decided to reject the investigation, although an appeal was heard in December 2019. One of the cases considered in the appeal was that of current Guantánamo prisoner Abd Al-Rahim Al-Nashiri, who currently faces capital trial.

The case of Al-Nashiri, who was detained and tortured at five different CIA secret torture facilities around the world between 2002 and 2006, demonstrates the willful complicity of dozens of states in the CIA’s torture program. He was one of two current Guantánamo prisoners who in 2018 took successful legal action against Romania and Lithuania for complicity in CIA torture before the European Court of Human Rights (ECtHR).

Lithuania now faces a second prosecution by 9/11 defendant Mustafa al-Hawsawi before the same court after failing to grant him victim status to participate in its own internal investigation. Lithuania has decided to challenge the claims even though it has already lost a case for torture collusion. The country is also challenging the claims despite the fact that the torture evidence obtained from Al-Hawsawi while he was detained there could be used against him at the military commission.

More prisoners have died at Guantánamo than have been convicted by the military commissions.

2019 was a bad year for justice for former and present Guantánamo prisoners, and not just for prisoners who have been subject to the military commission process. In France, in December, the Paris Court of Appeal ruled to uphold the 2017 dismissal of a claim by two French former prisoners held at Guantánamo until 2005 against U.S. officials for the torture they were subject to. Nizar Sassi and Mourad Benchellali accuse the U.S. authorities of subjecting them to arbitrary detention and torture, including sleep deprivation, loud music and flashing lights. Their lawyers condemned this ruling and said the appeal would be taken to the French Supreme Court.

A 2017 claim before the UN Committee Against Torture in Geneva by Belgian former prisoner Moussa Zemmouri to examine Belgium’s complicity in the torture he suffered while held in U.S. detention up until 2005 was dismissed by the Committee in August 2019. He and his lawyers argued that, “Belgian officials were complicit in the abuse, that Belgium knew about the torture but failed to prevent it, and that Belgian authorities subsequently failed to carry out adequate investigations into the crimes.” However, the Committee ruled that, “the case had already been sufficiently examined by the European Court of Human Rights.”

In September 2019, Andrei Babushkin, a member of Russia’s Human Rights Council, visited the Black Dolphin penal colony, where Russian former prisoner Rasul Kudayev is serving a life sentence imposed by a Russian court in 2014. He was convicted in a terrorism case that focused on his status as a former Guantánamo prisoner rather than actual evidence. The visit revealed that in spite of Kudayev’s deteriorating health, he has never been medically examined or treated since being transferred there almost four years ago. Babushkin demanded that he and another political prisoner receive medical treatment, but prison officials have not responded. Kudayev has previously brought two cases without other prisoners against Russia for torture and abuse in detention at the ECtHR, but this may not be an option currently as his access to lawyers is also restricted.

Not all of the U.S.’s torture victims ended up at Guantánamo. In 2012, German citizen Khaled el-Masri was the first person to win a case at the ECtHR concerning CIA torture against the Republic of North Macedonia for its involvement in his 2003-04 abduction and rendition to torture in Afghanistan. As part of the judgment, Macedonia had to investigate the abuses he suffered. However, citing the statute of limitation preventing a criminal investigation, the Committee of Ministers of the Council of Europe, responsible for ensuring compliance with the court’s rulings, decided in December 2019 to pass a resolution that effectively closes the door on an official investigation into what happened.

A September 2019 report by the New Zealand inspector-general of intelligence and security into the state’s involvement in the CIA’s extraordinary rendition program between 2001 and 2009 cleared its intelligence agencies of involvement or complicity even though they “received intelligence from individuals detained and tortured by the CIA […], and in one case provided the CIA with a question for a detainee [Khalid Sheikh Mohammed].”

In the United Kingdom, following the 2018 publication of two parliamentary reports into the U.K.’s collusion in CIA torture, which provided limited but critical evidence of the U.K.’s complicity and breach of its legal obligations, the British government announced in July 2019 that it would not allow a judge-led inquiry into is collusion in the CIA’s torture program — something it had promised as far back as 2010. The High Court, however, has allowed a legal challenge of this decision brought by two politicians and a nongovernmental organization.

Although 2019 was a difficult year for justice for Guantánamo’s current and former prisoners, there was at least one positive story. Spanish former prisoner Hamed Abderrahman Ahmed, released from Guantánamo in 2004, was arrested in 2016 for alleged involvement in an ISIS cell recruiting minors in his native Ceuta. At trial in June, the Spanish National Court expressed doubts about the charges and acquitted him and his codefendants. This is the second time he has been involved in such a case since leaving Guantánamo.

Many years after the opening of Guantánamo — and in many cases, years after release — justice remains elusive for Guantánamo’s current and former prisoners, even when they are the victims who have not been charged with any wrongdoing. States remain zealous in shielding their complicity and breaches of international legal obligations from legal action and accountability. It is a long road, and it is important that prisoners are supported in their claims for justice by civil society. Without justice, there is no way of ensuring that such crimes and complicity will not occur again.

Aisha Maniar is a London-based human rights activist who works with the London Guantánamo Campaign and other organizations, mainly on issues related to prisoner and minority rights and torture.

At Truthout, unlike most media, our journalism is free from government and corporate influence and censorship. But this is only sustainable if we have your support. If you like what you’re reading or just value what we do, will you take a few seconds to contribute to our work? Donate Now