First Meeting of the Healthy California for All Commission: A Step Toward State by State Single Payer, Medicare for All?

A single payer system drives down the cost of health care…single payer is the way to go.” -Gavin Newsom, campaigning for California Governor, 2017 “You can’t jump over a chasm in two steps”. -Dr. Quentin Young 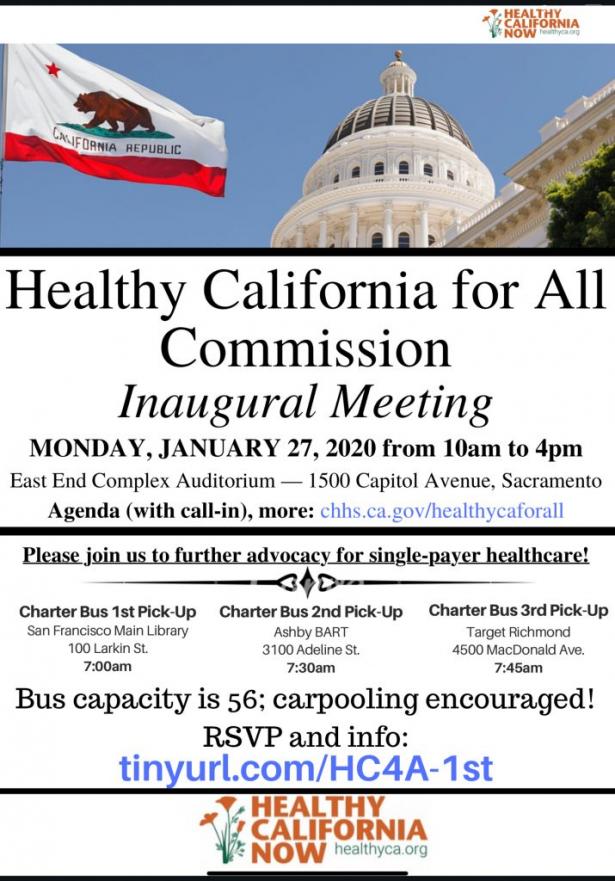 When the opening presentation at the first meeting of the Healthy California for All Commission concluded with a quote from the legendary physician and leader of the movement for single payer health care, the late Dr. Quentin Young – it seemed something hopeful might be about to take place.

The Commission was created by the state legislature in 2019 and approved by Governor Newsom with the purpose of “achieving a health care delivery system in California that provides coverage and access through a unified financing system, including, but not limited to, a single payer financing system, for all Californians”.

13 Commissioners, led by Dr. Mark Ghaly, Secretary of Health and Human Services for California, will do the work of the Commission, to be completed in 2022.

The introductory remarks by the Governor’s Chief of Staff Ann O’Leary, followed by Dr. Ghaly’s contextual comments, and then remarks from advisor to the Governor Dr. Alice Chen, seemed to demonstrate that the Governor had seriously charged California government representatives working with the Commission with developing a possible road to single payer in California.

In addition, the meeting began with a presentation on the history of health reform in California by Dr. Kevin Grumbach of the University of California at San Francisco, a member of Physicians for a National Health Program, and introduced by Dr. Ghaly as “one of the leaders of the movement for single payer in California”.

During a period for comments from the Commissioners, Acting Director of the California Dept. of Health Care Services and longtime state government functionary Richard Figueroa asked whether it would be appropriate for the Commission to discuss “what kind of state ballot initiative might be necessary”.  Many activists in the single payer movement believe we will win our goal through a statewide ballot initiative, which is the way many social justice victories are won in California.

Dr. Grumbach’s presentation was followed by one on the current state of health care in California, and another on policy considerations for the Commission.

All meetings of the Commission are mandated to be open to the public and public comment opportunities took place throughout the day.  Dozens of single payer, Medicare for All activists from Northern California attended and many addressed comments to the Commission.

When one Commissioner stated that one consideration might be the “political feasibility” of a single payer system, a member of PNHP and Healthy California Now, quickly responded that it is not the job of the Commission to decide or even discuss whether single payer is “politically feasible”.  If and when the Commission leans in this direction, we advocates will be ready to respond.

The next meeting of the Commission will be April 6, 2020.  The staff of the Commission is keenly aware of the importance of holding meetings in varied parts of California and is open to ways for the public all over the state to be able to have input into the Commission’s work.

As we headed toward home after the long day, the activists seemed to be satisfied with the meeting, perhaps slightly surprised by its emphasis on single payer health care, but retaining some healthy skepticism, knowing the road is long and bumpy.

We know that California’s insurance, pharmaceutical, and hospital industries lurk, ready to pounce, though they are not officially represented among the Commissioners.   The heated national debate on health care and the outcome of the Presidential election will certainly be powerful factors ultimately informing the Commission’s work.

Our movement will have to make its presence even more effective during the Commission’s work, finding the ways to voice our views and influence the Commission from all corners of this big state and its richly diverse people.

Commission proceedings and documents – which are informative for activists across the country -  can be viewed at https://www.chhs.ca.gov/healthycaforall/