An Oligarch Has Bought His Way Into the 2020 Race. Why is No One Talking About This?

Michael Bloomberg has already spent more of his own money than Trump or Tom Steyer. He’s making a joke of our democracy – and Democrats should be appalled. Some Democrats, are inviting him on the debate stage.

February 6, 2020 Ross Barkan The Guardian
Printer friendly
An Oligarch Has Bought His Way Into the 2020 Race. Why is No One Talking About This? Published February 6, 2020 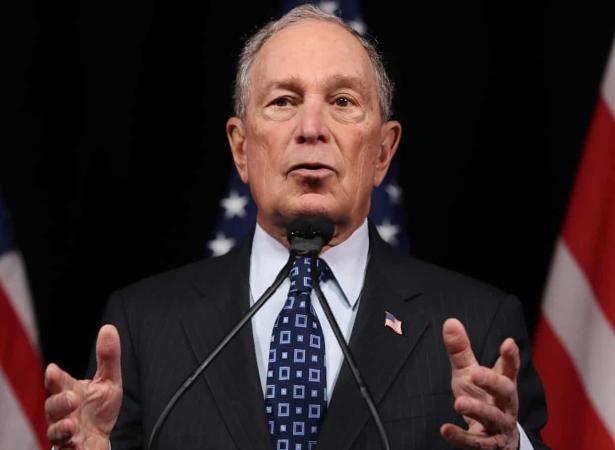 Michael Bloomberg: ‘It’s a galling failure of our democracy that Bloomberg’s wealth can be deployed to such ends.’,Photograph: Mark Wilson/Getty Images // The Guardian

With an estimated worth of $3bn, Donald Trump is just barely a member of the billionaires’ club.

Michael Bloomberg, on the other hand, boasts a reported net worth of $60bn. While the president of the United States plays a monstrously wealthy oligarch on TV, Bloomberg is the genuine artifact – and he’s already spent more than $250m on a presidential bid that has, through the power of money alone, catapulted him to the edge of contention. On Sunday he’ll be airing a $10m Super Bowl ad.

This is not one of those columns that will argue Bloomberg can seize the Democratic nomination. With a national polling average still below 10%, he has daunting odds as long as some combination of Bernie Sanders, Joe Biden and Elizabeth Warren remain in the race. Democratic voters will always favor a liberal stalwart over a former Republican who aggressively boosted George W Bush’s re-election bid, unleashed a militarized police force on black and brown New Yorkers, and once mocked the idea of raising taxes on the rich.

But Bloomberg has bought himself a ticket outside the basement of the primary, and this should alarm far more professional Democrats and progressives than it has so far. Even Tom Steyer, a fellow billionaire, is a pale imitation; he’s reportedly spent less than half of what Bloomberg has, despite entering the race earlier.

This should not be normalized. Bloomberg is unleashing an unprecedented, inordinate amount of personal wealth on an advertising blitz that demonstrates just how frail our democratic institutions really are.

If the Democratic party is serious about standing up to oligarchy, it should shun Bloomberg

But his shamelessness seems to be working. Some Democrats, convinced they could use a useful foil to boost their own bids, are inviting him on the debate stage. Amy Klobuchar, the Minnesota senator, wants Bloomberg in the debates so he can “go back and forth” with candidates and voters can “evaluate” him. There is a belief, among certain Democrats, that the notoriously wooden Bloomberg will be undercut in a televised debate. Letting him on stage, in theory, makes him more accountable to voters.

Instead, allowing Bloomberg there will only further elevate and legitimize his candidacy, which exists chiefly as a gusher of 30-second TV and radio hits. Putting him on stage will send a message: this man deserves to be there. Through sheer amounts of wealth none of us will fathom, he can break democracy and walk into the arena.

We don’t know Trump’s net worth because he won’t release his tax returns. We can guess; Trump pumped roughly $66m of his own money into his 2016 campaign – which is significantly less than what Bloomberg spent to win a third term as mayor of New York. Trump rode a tsunami of free advertising to the presidency – CNN couldn’t look away – and proved, in his own way, to be a durable fundraiser. Bloomberg has already tripled Trump’s 2016 spending, with no end in sight.

Unlike other nations, America cannot restrict outside spending as long as Citizens United remains the law of the land. And even if it gets overturned, there will still be loopholes that allow billionaires to operate outside the campaign finance system, vastly outspending campaigns that tirelessly seek their money from ordinary people. American law would, ideally, institute hard spending caps on all political races and limit the times of year advertising can barrage voters.

In the meantime, if the Democratic party is serious about standing up to oligarchy, it should shun Bloomberg. Candidates should unite, as one, to denounce not just this concentration of wealth in one person’s hands, but how it is deployed. They should make the type of statement the media can’t ignore. They should make clear, with the collective power they possess to shape the discourse, that it’s a galling failure of our democracy that Bloomberg’s wealth can be deployed to such ends.

Bloomberg can’t be ignored any longer. Even if he fails to win a significant chunk of delegates, he will have shown his fellow billionaires what’s possible if they only keep spending on themselves. For enough money, it turns out, you can just buy political contention.

Trump, through his blatant corruption, makes a mockery of our democratic norms. Now the more outwardly respectable Bloomberg is doing the same, just in another form. He cannot be bought; he simply buys others.

[Ross Barkan is a writer and journalist in New York City.]