Bernie Sanders’s victory in the New Hampshire primary marks a turning point for Democratic politics. “No candidate so firmly planted on the left has been so well positioned to capture the nomination of the Democratic Party,” 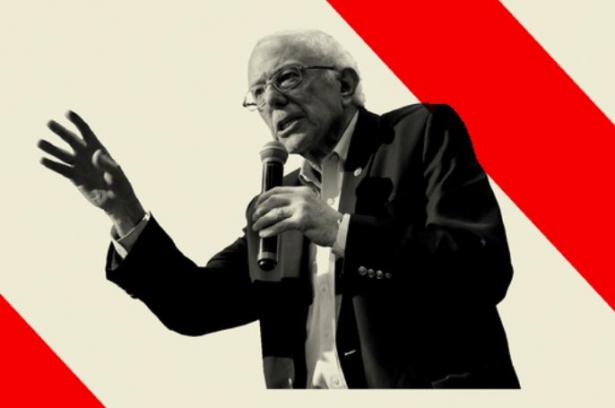 It has taken a single week

for Senator Bernie Sanders to achieve a distinction that eluded him for the entirety of his underdog campaign four years ago: The 78-year-old democratic socialist from Vermont is now, at least for the moment, the front-runner for the Democratic nomination for president.

Sanders’s victory tonight in the New Hampshire primary, combined with his strong finish last week in Iowa and a bounce in national polling, places him firmly at the top of the Democratic field as the nomination race heads to Nevada and South Carolina. He has benefited from a split in the moderate vote, as a late surge from Senator Amy Klobuchar slowed the momentum of Sanders’s closest New Hampshire rival, former Mayor Pete Buttigieg of South Bend, Indiana. Former Vice President Joe Biden’s second consecutive lackluster result could threaten his firewall in South Carolina, where Sanders was on the rise and cutting into Biden’s lead among its crucial constituency of African American voters.

But the significance of Sanders’s standing in the race goes far beyond the next round of primaries. In the modern history of American politics, no candidate so firmly planted on the left has been so well positioned to capture the nomination of the Democratic Party. Sanders has won election after election in Vermont as an independent, regularly declining the label of the party he now seeks to lead. His rise to the top of a field filled with more mainstream candidates could point to an important shift in the electorate. In Iowa and New Hampshire, Sanders’s talk of revolution overtook Biden’s pleas for a return to normalcy in the age of Donald Trump, and with his platform representing a kind of untainted progressive purity, the oldest white candidate on the ballot prevailed—albeit narrowly—over a plethora of younger, more diverse options.

Yet none of the transformative policies Sanders has proposed—a Green New Deal, Medicare for All, and debt-free college the most notable among them—embody the change he represents as much as the label he proudly carries: democratic socialist. It’s a term Republicans have weaponized against liberals so frequently that most Democratic politicians simply reject the tag out of hand. Sanders does not, and his success frightens establishment Democrats who worry that the socialism label remains a potent pejorative among the swing voters they’ll need to defeat President Trump in key battlegrounds this fall. On the day after Iowa’s caucuses, Trump devoted an entire section of his State of the Union address to a warning against the advance of socialism, while Biden spent his final days in New Hampshire cautioning that Sanders’s “democratic socialist” label would bring down Democrats running alongside him on November’s ballot.

Neither attack worked, and to Sanders’s supporters, his surge to the top is evidence that socialism as an epithet has lost its sting. “If you look at the history of this country and the left, there have been times when our ideas have been popular and millions of working people have stood up for them,” Maria Svart, the national director of the Sanders-backing Democratic Socialists of America, told me. “And I think the time is coming again for us to do that.

“The socialist bogeyman idea,” she continued, “has been used for decades to prevent people from bringing up alternative ideas, and Bernie winning validates our ideas and demonstrates that people, especially young people, are willing to confront capitalism.”

The recent evidence for whether Sanders’s identity as a democratic socialist would hurt him in a general-election matchup with Trump is mixed. He fared no worse against the president when pollsters identified him as a socialist in a survey conducted by the progressive group Data for Progress. But socialism remained broadly unpopular in a poll released last month by NBC News and The Wall Street Journal: Just 19 percent of respondents said they had a positive view of socialism, compared with 53 percent who held a negative view. That was roughly the inverse of how people in the poll felt about capitalism.

Rather than renounce the term, he has sought in both of his presidential campaigns to define it as part of a “quintessentially American” tradition, a descendant of mainstream liberals such as Franklin D. Roosevelt, Lyndon B. Johnson, and Martin Luther King Jr. (who were also demonized by their opponents as socialists while they were alive). “We must recognize that in the 21st century, in the wealthiest country in the history of the world, economic rights are human rights,” Sanders said in a speech in June. “That is what I mean by democratic socialism.”

More recently, Sanders has argued that the U.S. is already “a socialist society” that redistributes national wealth to corporations through tax breaks and subsidies. “The difference between my socialism and Trump’s socialism is, I believe the government should help working families, not billionaires,” he said on Fox News Sunday.

In claiming his victory on Tuesday night, Sanders made no mention of democratic socialism. Still, it’s clear that Sanders is more comfortable with the term than even some of his top backers, who wonder whether its time as a political liability has actually passed. “He can call himself whatever he wants. For most of his supporters, we are not democratic socialists,” Larry Cohen, the chairman of Our Revolution, the progressive organization that spun out of Sanders’s 2016 campaign, told me. “We don’t use the term, and we don’t use the term because it doesn’t do any good. Again, my friends in DSA would disagree with that. I don’t think the term is helpful.”

When I asked Cohen whether Sanders should disavow the phrase, he replied: “I think that would come off as disingenuous.”

Republicans have indicated that they plan to target Sanders’s socialist label aggressively if he’s the nominee. They’ve already begun attacking Democratic congressional candidates whom they lump together with Representative Alexandria Ocasio-Cortez of New York, another progressive who has identified as a democratic socialist. Trump, however, has already gone a step further in trying to tar Sanders’s ideology as fundamentally un-American. “I think he’s a communist,” the president told Fox News’s Sean Hannity in a pre–Super Bowl interview. “I think of communism when I think of Bernie. You could say socialist, but didn’t he get married in Moscow?” (Sanders did not get married in Moscow, but he and Jane Sanders did take their honeymoon in the Soviet Union in 1988.)

While some Republicans, including the president, may salivate at the prospect of facing Sanders in November, his rise within the Democratic Party is alarming to conservatives who fear that the concept they have spent their entire professional life trying to discredit is suddenly catching hold again. “I view it as really dangerous,” David McIntosh, the president of the conservative Club for Growth, told me about the prospect of Sanders winning the nomination. “Don’t assume that if Bernie gets the nomination, it’s a layup and you’re going to beat him. All of us have to redouble our efforts.”

In 2016, many Democrats were rooting for Trump to win the GOP nomination on the grounds that he would be an easy opponent in the fall. Conservatives should not make the same mistake with Sanders, McIntosh told me. As for socialism, he acknowledged that the term was not as resonant with voters as it was during the height of the Cold War. “Is it enough to just say socialism is bad?” he asked. “We do have to explain to the American people why it’s bad, why we think freedom is a better alternative. We need to do a better job of that. Bernie hopefully will be a wake-up call to all of us on the conservative side as well.”

Sanders and his supporters point out that conservatives will try to affix the socialism label to any Democratic nominee, no matter how centrist the person is. But to people like Cohen, the battle to reclaim socialism isn’t worth the fight in 2020. “We can’t afford to lose voters based on labels,” he told me.

He likes to instead call the Sanders campaign “a democratic popular movement” with a new New Deal for the economy at its core. Sanders, Cohen noted, isn’t calling for the nationalization of banks, the railroads, or other major industries—the kinds of proposals that many people might associate with socialism.

Sanders’s early victories, Cohen suggested, aren’t a verdict on democratic socialism—however you define it—or whether its time has come in America. It’s a far simpler message, he said, aimed at “the Democratic naysayers” who say that the senator from Vermont’s ideas are impractical. “You’re not standing for what people want to see,” Cohen said. “People actually are hurting. They’re not at death’s door. But they can imagine a better America, and that’s what’s winning tonight—that vision of a better America.”

[Russell Berman is a staff writer at The Atlantic, where he covers politics.]