film Parasite Is Our Film

Filmmaker Bong Joon-ho on his film Parasite: " I tried to express a sentiment specific to Korean culture, [but] all the responses from different audiences were pretty much the same. Essentially, we all live in the same country, called Capitalism." 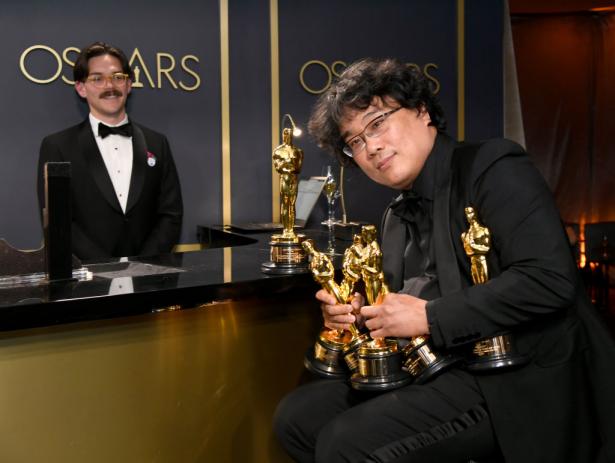 We still can’t believe the Academy, a notoriously hidebound institution, awarded four Oscars to Parasite, an explicitly anticapitalist movie. But we’ll take it.

No “foreign film” has ever won Best Picture. Even the most jaded lefty was reeling for joy that, of all films, Parasite would be the one to set such a precedent. Because for many of us, Parasite is our film. Granted, it’s Bong Joon-ho’s and his team’s film first, and the Korean people’s second — but it belongs to the international socialist community third, embraced on behalf of the working class the film depicts with such acute understanding. We’ve been Bong Joon-ho fans from the beginning, we rave-reviewed Parasite to everyone who would listen, we talked it up to our families and friends and online communities, we hugged it to our hearts. After all, Bong is the director who said about the international reaction to his movie:

I tried to express a sentiment specific to Korean culture, [but] all the responses from different audiences were pretty much the same. Essentially, we all live in the same country, called Capitalism.

So how did it come to be that the notoriously hidebound Academy membership also hugged the film to their desiccated hearts? I mean, there was 1917, a perfectly typical choice for a Best Picture by Hollywood standards — a big self-righteous spectacle with high production values pretending to be an anti-war film while actually providing all the contrived thrills that the war film genre generally does. How did the membership stop themselves from voting for it as an automatic reflex?

Or is it possible many of them passed their Academy screeners and voting rights to their kids and grandkids, the younger generations more inclined to join socialist groups and support Bernie Sanders for president?

Of course, the explanation of Parasite’s mainstream appeal might also be due to other interpretations of the film, which argued for its supposedly commendable “evenhandedness” in depicting the class war. Much has been made of the flaws and foibles of all the Parasite characters, the lower-class Kim family as well as their upper-class employers, the Park family. And look how there’s no worker solidarity on display! That must mean Bong Joon-ho has no revolutionary ax to grind. As journalist Tim Shorrock put it,

Parasite is not a cry for revolution or radical redistribution of wealth. As some Korean critics have noted, Bong scrupulously avoids taking sides in his film. Parasite takes us “not to the ledge of class war but to a shrug over inequality,” E. Tammy Kim wrote last fall in The Nation (where I am a correspondent). “What bothers Bong is not the fact of poverty and unjust distribution; he only wants our social arrangements to feel a bit kinder.”

That seemed a little harsh to me, especially after seeing the film a second time this week. But Bong himself seemed to underscore her point when he agreed with a reporter’s assertion that “there’s a huge lack of class solidarity between the various working-class people” in the film. Yes, “the weak and have nots are fighting one another,” he told Gabriella Paiella in GQ.

But it’s hard to account for Bong Joon-ho’s entire film career, at least from The Host through Snowpiercer, if we adopt the view that he’s not siding with the working poor or seeking revolutionary change. Parasite in particular presents the agony of the worker in such painful terms it’s hard to imagine not wanting to tear down a system that pits the sufferers against each other in a fight for the crumbs falling from wealthy tables. That climactic scene in Parasite, when the working-class Kim family daughter is murdered and the monstrously wealthy Park family father puts his hand to his nose in a delicate gesture of squeamishness at the supposed smell of the working class, right over her dead body, is surely no “evenhanded” depiction of faults on all sides of the class struggle.

At any rate, we’ll take our amazing moment of hope and glory: the night featured not only Parasite’s unlikely triumph but that other most discombobulating moment when Julia Reichert, co-director of Best Documentary Feature winner American Factory, declared in her acceptance speech, “We believe things will get better when workers of the world unite.”

Hearing the Communist Manifesto quoted at the Academy Awards ceremony, where the elite meet to swank around in sickeningly extravagant jewels and gowns and talk multimillion-dollar deals at exclusive after-parties, did a lot to contribute to a dreamlike sense that this couldn’t really be happening. Yet it did happen.

And even if this represents a mere fad, some Bernie Sanders–driven moment of cool for the Left that permeates even the cluelessly entrenched neoliberalism long dominating Hollywood politics, we’ll take it. There’s always a segment of the population that runs with the trendsetters wherever they lie on the political spectrum. We’ll need their idiotic support too. Mass movements don’t allow for nose-holding squeamishness.