Many in the more progressive wing of the party have been criticizing her positions on climate change and broader environmental concerns, as well as her stances on economic inequality, social welfare and the criminal legal system. 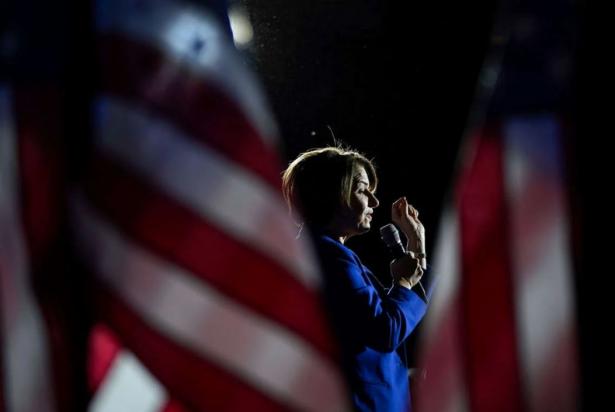 In recent days, much of the mainstream media has been focusing on the rise of centrist Minnesota senator Amy Klobuchar as a serious contender in the Democratic presidential primary. Many in the more progressive wing of the party have been criticizing her positions on climate change and broader environmental concerns, as well as her stances on economic inequality, social welfare and the criminal legal system. However, attention also needs to be brought to her surprisingly right-wing foreign policy perspectives.

First and foremost are her rather frightening positions regarding the Israeli-Palestinian conflict, especially their implications for civil liberties. It’s unfortunately not unusual for Democrats — even those on the more liberal end of the spectrum — to take positions toward the Palestinians that would place these office-holders on what would be the right wing of the Israeli political spectrum. Klobuchar, however, goes on to embrace an unusually extreme perspective.

Klobuchar has long pushed for moving the U.S. embassy to Jerusalem and has promised not to reverse Trump’s controversial decision to do so. Meanwhile, rejecting detailed reports from Amnesty International, Human Rights Watch and other reputable international organizations, as well as Israeli human rights groups like B’Tselem and Breaking the Silence, she insists that Israel meets international standards for human rights. Indeed, she has referred to Israel as “our beacon of democracy in the Mideast.” One of her goals as president, she said, would be “to bring in American support again in a big way for Israel.”

What differentiates her from the rest of the Democratic field, however, was that Klobuchar was the only one of the original six senators running for president to support last year’s Republican-sponsored Senate Bill 1 (S.1), which was designed to support efforts by states to punish those who boycott Israel, Israeli settlements, the Israeli occupation, or companies supporting the occupation and settlements. (Twenty-six states have enacted such legislation.) Not only did Senators Bernie Sanders and Elizabeth Warren come out in opposition to the bill, even staunchly pro-Israel senators like Kirsten Gillibrand, Cory Booker and Kamala Harris thought the bill was too extreme and also voted no.

Particularly controversial was language in the bill re-defining Israel to include “Israeli-controlled territories,” thereby putting Klobuchar on record as supporting punishing companies that may have normal business dealings with Israel itself but which honor calls by the United Nations and European Union for businesses to not deal with illegal Israeli settlements. This clause led moderate pro-Israel groups — such as J Street and Americans for Peace Now, both of which oppose the Boycott, Divestment and Sanctions (BDS) campaign — to come out against the legislation.

The use of boycotts has long been recognized as a First Amendment right. Indeed, the American Civil Liberties Union (ACLU) came out strongly against S.1. When the Klobuchar-backed measure passed, the ACLU released a statement saying, “Today the Senate chose politics over the Constitution and trampled on the First Amendment rights of all Americans.”

Klobuchar has long pushed for moving the U.S. embassy to Jerusalem and has promised not to reverse Trump’s controversial decision to do so.

Even Republican Sen. Rand Paul opposed the bill, noting “our country was founded upon the concept and in the midst of a great boycott,” adding, “There is likely nothing more American than to protest, to dissent, and to boycott.”

State laws that punish anyone supporting BDS campaigns are already having real-life consequences for people across the country. A well-respected high school teacher in Kansas who supported her Mennonite congregation’s call for boycotting companies supporting the Israeli occupation was denied a contract that she had initially been offered to lead a summer pedagogical workshop for other teachers. The University of Houston, a public institution, has refused to pay honoraria or reimburse expenses for guest speakers who have boycotted Israel. A lawyer in Arizona who had been providing legal support for indigent inmates was denied a renewal of his state contract because of his boycotting a company supporting the occupation. A Palestinian-American speech pathologist in a Texas elementary school had her contract canceled for refusing to sign a no-boycott pledge. In Arkansas, newspapers which accept advertising from state agencies must make a similar declaration. Some states have even denied funding for professors to attend conferences of academic organizations which have endorsed boycotts targeting the Israeli occupation.

Some of these state laws have already been thrown out on constitutional grounds; challenges to others are pending. Regardless of the outcome of these legal challenges, the fact that Klobuchar so strongly supports the Israeli occupation and settlements that she is willing to suppress the free speech rights of socially conscious companies and individual contractors is very disturbing.

Klobuchar was the only one of the six senators running for president to support last year’s Republican-sponsored Senate Bill 1 , designed to support efforts by states to punish those who boycott the Israeli occupation.

Fortunately, S.1 was deemed so extreme that it failed to pass in the Democratic-controlled House of Representatives.

As president, however, Klobuchar could encourage her fellow Democrats to pass a similar measure, or push through an executive order implementing its key provisions.

Such legislation goes beyond the question of Israel and Palestine as it establishes a very dangerous precedent. This is why the Koch Brothers, the American Legislative Exchange Council (ALEC), and other conservative pro-business groups were major backers of these state laws and of S.1. This has raised concerns that Klobuchar as president could also target those boycotting other allied countries engaged in human rights abuses, as well as campaigns advocating boycotts of and divestment from weapons manufacturers, carbon emitters, sweatshops, union busters and other companies.

It is ironic to have a leading contender for the Democratic presidential nomination take such hard right positions at a time when rank-and-file Democrats — particularly younger voters, whose turnout is essential for a Democratic victory in November — have not only been increasingly supportive of campaigns for corporate responsibility, but have been challenging Washington’s traditional unconditional support for Israel’s right-wing government.

The fact that Klobuchar so strongly supports the Israeli occupation and settlements that she is willing to suppress the free speech rights of socially conscious companies and individual contractors is very disturbing.

Polls show most Democrats are still broadly supportive of Israel but are increasingly critical of U.S. acquiescence to the occupation, settlements and related human rights abuses. These same polls show increasing support for applying pressure on the Netanyahu government. Sanders, Warren and even Pete Buttigieg have expressed a willingness to link the nearly $3 billion in taxpayer subsidies to Israel to the government’s willingness to make the necessary compromises for peace.

Indeed, like U.S. support for the Salvadoran junta and the Nicaraguan Contras in the 1980s, U.S. support for Israel’s rightist government has today become a major focus for Democratic-leaning voters concerned with human rights and U.S. foreign policy. To have a nominee who allies more with the Republicans on this important foreign policy issue could hurt voter enthusiasm among this key constituency come November.

Moreover, Klobuchar’s support for S.1 raises a serious red flag when it comes to free speech. At a time when these liberties are under increasing attack by the Trump administration, providing a potential wedge for Democrats to gain among libertarian-oriented swing voters, Klobuchar’s backing of such draconian legislation would put Democrats in a weaker position.

Given the unpopularity of such positions among the Democratic rank-and-file, it’s not surprising that Klobuchar has largely avoided mentioning her hardline views in stump speeches, in interviews and in the debates. These key policy positions should be more widely known among Democratic voters, however, as the primary season progresses.

[Stephen Zunes is a professor of politics and coordinator of Middle Eastern studies at the University of San Francisco.]