Junk the VFA and End Unequal Policies with the US!

“The termination of the VFA should have happened a long time ago because it violates national sovereignty, and places foreign interests and the security of U.S. military soldiers above the interests of everyday Filipinos..." 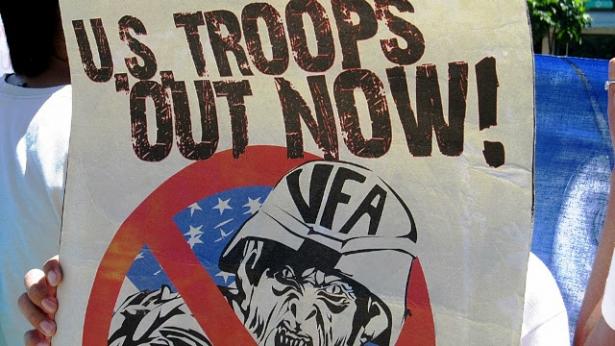 On February 11, 2020, President Rodrigo Duterte ordered the official termination of the Visiting Forces Agreement (VFA), marking 180 days until the termination can take effect.

This announcement comes after three U.S. Senators ​Richard "Dick" Durbin, Patrick Leahy, and Edward Markey amplified the call for the release of a political prisoner and critic of Duterte’s Drug War, Philippine Senator Lela De Lima, and accountability for those responsible for her detention and  human rights violations.

As a result, the U.S. issued sanctions against those responsible for human rights violations, including canceling the U.S. Visa of Ronald “Bato” Dela Rosa, former drug war architect and PNP Chief.

WHAT IS THE VFA?

In 1991, the Philippine Senate made a landmark decision to shut down the U.S.'s largest overseas military bases, Subic Naval and Clark Air Field, as a result of the growing people’s movement  clamoring for their closure and in the spirit of upholding genuine Philippine sovereignty.

On May 27, 1999, then-President Estrada signed the Visiting Forces Agreement (VFA) with the United States, a policy that would (1) allow the U.S. military troops to conduct regular joint military exercises; and (2) pave the way for the establishment of the Joint Special Operations Task Force Philippines (JSOTF-P) to contribute to the U.S. so-called global “War on Terror” two years later.

The 21-year old policy has allowed for over 300 ​joint military exercises dubbed “Balikatan” or "shoulder-to-shoulder" war games between the U.S. and Armed Forces of the Philippines (AFP).  The U.S. continues to dock its massive war ships, ​destroy eco systems​, and deploy thousands of  U.S. military personnel in the Philippines every April.

​The VFA wantonly violates the 1987 Philippine Constitution, which prohibits foreign military presence on Philippine soil.    “The termination of the VFA should  have happened a long time ago because it violates national sovereignty, and places foreign interests and the security of U.S. military soldiers above the interests of everyday Filipinos like in the case of Jennifer Laude, Nicole, and countless others.

IMPACTS OF THE VFA

In addition to the 2005 rape case of Suzette “Nicole” Nicolas and the 2014 murder of Jennifer Laude, U.S. military presence in the Philippines has resulted in decades of senseless deaths, environmental pollution and degradation, spread of diseases, rape, harassment, and molestation of Filipino women and children.

Cababa continued, “Human rights abuses are rarely reported or reach the court system because the VFA was written in a way to protect U.S. interests and soldiers. Philippine sovereignty remains a pipedream as long as the VFA, Balikatan exercises, Enhanced Defense Cooperation Agreement, and other military agreements with the U.S. are still in  place.”

Additionally, the presence of U.S. troops in the Philippines has been marked as “low-intensity  warfare” given the Philippines’ strategic location for trade, military, and profit with the U.S. hellbent on maintaining control over the Asia-Pacific as the largest U.S. export market worth over $60 billion.

This week marks the anniversary of the Philippine-American War and over 20 years of the VFA.  “Despite claims by the loyal servants of U.S. imperialism in the military's top brass that the Philippines needs the VFA and other U.S. assistance in order to bring its military up to modern standards, the AFP hasn’t modernized or improved. Instead, it has been thoroughly exposed that the AFP has been trained to serve and protect U.S. interests above millions of everyday Filipinos.

Poor peasants are brutally killed, indigenous people are displaced, and women and children suffer at the hands of the VFA and its puppet troops in the AFP.  It’s time for Duterte to stop playing games, and for the U.S. to stop using the Philippines as its own military playground,” explained Cababa.

BAYAN and other patriotic organizations in the Philippines have consistently called for the  abrogation of the VFA since it was ratified in 1999 and all other U.S. military agreements with the Philippines, including the Mutual Defense Treaty (MDT) in 1951 and the Enhanced Defense Cooperation Agreement (EDCA) in 2014.    “We demand complete sovereignty for the Filipino people against any foreign power.  How  much is Duterte willing to sell Philippine sovereignty?  He’s entertaining other VFA  agreements with other countries such as China, eager to quickly sell Philippine land and seas to the highest bidder that approves his bloody crimes.” said Cababa.

The termination of the VFA will not go into effect until after 6 months, which means between now and then Duterte can change his mind at the cost of jeopardizing and threatening the lives of the  Filipino people.

We call on all the Filipino community and allies to stand with us for genuine sovereignty and  independent foreign policies. We remain vigilant to ensure the Duterte government does not backtrack on its termination position. We will fight any efforts by the U.S. government to prevent the termination of the agreement or to pressure the Philippines to withdraw its notice of termination.

With or without Duterte, the Filipino people will ultimately ensure the complete termination of the VFA and all other agreements which violate our sovereignty.

Junk the VFA, EDCA, and MDT!  US Troops Out of the Philippines Now!  Uphold Philippine Sovereignty!

BAYAN-USA is an alliance of over 30 progressive Filipino organizations in the U.S. representing students, scholars, women, workers, artists, and youth. As the first and largest international chapter of Bagong Alyansang Makabayan (BAYAN-Philippines ​ ), BAYAN-USA serves as an information bureau for the national democratic movement of the Philippines and as a center for educating, organizing, and mobilizing anti-imperialist and progressive Filipinos in the U.S.