Rather than obsess over who Warren will endorse, let’s see Biden and Sanders lift up her ideas and principles 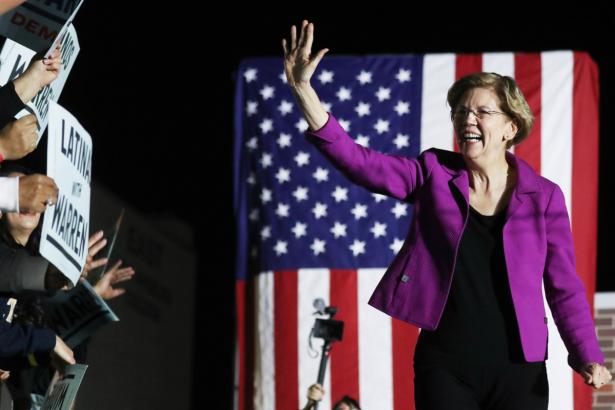 In the immediate wake of someone suspending her or his campaign, both our elected officials and we in the press who cover them focus too acutely on the question of endorsements. It is an ugly, gossipy trend that distorts the very purpose of public service, placing more emphasis on what candidates can do for one another rather than what they can do for the voters. With the urgency of full bladders, pundits immediately pivot to asking who the fallen contender will support — and fans of the frontrunners go online to make their voices heard.

Then the laudatory goodbyes begin. If the lionizing soundbites or tweets come from the front-runners or their surrogates, well, put a little extra sugar on top: They’re meant to woo into the very endorsements I just mentioned. Some are so saccharine, even, that they make you wonder why they didn’t vote for her in the first place.

This all can be particularly rancid when the specters of identity and exclusion loom. Yes, Tulsi Gabbard remains. But if we are to speak of the last realistic chance women had at the presidency in 2020, it left with Elizabeth Warren on Thursday. The withdrawals of Kamala Harris, Cory Booker, Kirsten Gillibrand, Julián Castro, and most recently Amy Klobuchar surely still sting for their most ardent supporters. But Warren’s departure, being the last viable female candidacy and leaving two septuagenarian white men to contend for the Democratic nomination, should be a particularly distressful coda for us all. The incumbent president has made this a quite literally viral moment, spotlighting anew in the last couple weeks the value of competency and expertise in the White House.

This upcoming January, for the 59th consecutive time, the United States will fail to inaugurate a woman as president. The young girls at Warren’s campaign stops with whom she made “pinky promises” that they, too, would one day run for president must keep imagining that it is possible. However, that does not mean that we, as a country, should settle for leadership without a woman’s ideas and example. And just because a woman like Warren (or Harris, or Gillibrand, or Klobuchar) has left the race, that doesn’t necessarily mean that her many proposals should.

So rather than considering Warren’s endorsement of the two remaining men, Joe Biden and Bernie Sanders, let’s consider why in a manner of speaking they should endorse her. In a recent TIME interview, Charlotte Alter asked Warren how she’d feel if either of the two frontrunning (male) competitors at the time won the nomination, but adopted her now-legendarily detailed and voluminous plans. “Are you kidding? Fabulous!” Warren responded. “I think the question you’re asking me is, ‘If the things you want to get done actually get done, will your heart be broken?’ And the answer is, ‘No! I’ll lead the parade!’”

Biden and Sanders should be the drum majors. In celebrating Warren’s ideas, and, by extension, what her policies and approach to politics represented in this race, they would both do themselves a service and the nation. This isn’t about reverence for Warren. She had her faults, some of which I wrote about — and to her credit, she attempted to make amends. But rather than obsessing over endorsements, I’d rather encourage you to turn your gaze away from what she can do for Bernie and Joe and put it back onto how she can still help the American people and make the country better.

First, many of Warren’s plans would fill holes for both Biden and Sanders. There is no chance that I could encapsulate here all of those that may help both men, but there are a few easy items to pick right from the start.

Both men should take a cue from Warren on her combative language and how she used identity to break free from antiquated modes of thinking. In her Monday rally prior to Super Tuesday here in Los Angeles, Warren spoke before a heavily Latinx-crowd of thousands about janitors fighting gender and racial discrimination before and as they organized for union rights: “So we can get timid. We can cower. Or we can fight back like the Latina janitors of a generation ago. Me, I’m fighting back. Fighting back is an act of patriotism.” This was an event where most knew how the next day’s election would go. But pointing to a history of resistance within a marginalized community, rather than to herself, as a symbol of toughness should provide a model for Biden and Sanders — both of whom could stand to be more sensitive on this front.

Though Warren’s campaign took some heat for not appealing effectively to black voters, she made appealing to black women an early and principal focus. There is no reason why both men, who have reasonable arguments for being competitive in the fall, should not begin making policy-oriented pitches to black communities. Her “Working Agenda for Black America” offers comprehensive, but explicable solutions that not only improve on what both Biden and Sanders offer our communities at the moment, but explain precisely how she’d get each of her items accomplished. (Biden doesn’t have a separate plan for black Americans, but as Michael Harriot observed, weaves some decent solutions into his overall platform; Sanders’s plan for racial justice offers elementary, bullet-pointed solutions and details by comparison.)

The senator from Vermont should take a cue from how Warren spoke about gun violence, considering how often Biden likes to cite Sanders voting with the gun lobby in two key instances. Biden keeps doing so within the context of mass shootings. However, Warren — who held off attacking Sanders on this ground — consistently broadened her rhetoric on firearms to insist that everyday violence also be a national priority. “It’s not just mass shootings,” she said last June a day after a massacre at a Virginia Beach government building killed 12 people, insisting that gun violence occurs “on sidewalks and playgrounds and people’s backyards. It’s happening family by family across the country. And it doesn’t get the same headlines. And that is wrong.” Whether or not it helps Sanders attract the black voters that have been going Biden’s way, this is simply the right way to be speaking at this moment — especially as the weather grows hotter, and the likelihood of shootings of all types grows.

On climate, it may only be Biden who needs the help. Environmental activists have pressured Biden to improve his plan. As it currently stands, it’s hardly enough to attract the kinds of young voters he surely wants to draw away from Sanders and would need to excite in a general election, most of whom have this issue at the forefront of their minds. Warren’s plan not only embraces the Green New Deal legislation, the kind of ambitious legislation we’ll need if we’re ever going to keep this planet inhabitable, but it rules out fracking — the hazardous extraction process for natural gas that, yes, fills jobs in places like my native Ohio and Pennsylvania, but would challenge Biden to come up with some innovative job-creation strategies for those communities that might be affected. It also prioritizes environmental justice and targets Wall Street for financing the climate crisis — things that should appeal to Biden, if he wants to actually solve the problem and help Democratic constituencies at the same time.

By her own characterization Thursday morning, Warren was trying to fill a center, if certainly not centrist, lane in this contest: Biden was the so-called moderate and Sanders was labeled as the liberal or leftist. Warren had an entirely different approach, which she didn’t label. I won’t attempt to, but I’d characterize it like this: Sanders has a lot of leftist ideas, many of which Warren agrees with — but he offers many fewer specifics, puts them under the umbrella of “democratic socialism,” and insists that we trust him to carry those ideas to fruition. Biden simply insists that the Sanders ideas can’t get done. “Much of what he’s proposing is very, very much pie-in-the-sky,” Biden said Monday in an interview, insisting that his platform lays out a more realistic path towards health care and winning Democratic control of Congress. The “Yes, We Can” vice-president was turning into very much the “No, We Can’t” candidate.

Warren, with all of her plans, was the out: the candidate who said we can get things done, but trust me, the person who has done the homework. She’d predicted the 2008 financial crisis four years ahead of time, she was the one who had built the Consumer Financial Protection Bureau at President Obama’s behest. She knew the nuances of government inside and out and got shit done when afforded the opportunity. She was the one who paid attention to details, who studied for the exams, so to speak. Warren was Hermione, most often saving the day behind the scenes while Harry and Ron got the shine. We had read and seen this story play out before, and even many of those supporters of her campaign who likely understood how it would end.

Democrats are the only major party that can purport to champion women’s rights in any kind of factual way. So the men in that party have a responsibility, being that they’re the only ones who get to be president, to help bring America closer to the day when those little girls who Warren met can stop having to make “pinky promises.” They can just run for president because they will know that they can win. They will know that they have won. In 2020, we are not going to get a woman in the White House yet again, so it is the responsibility of the two men vying for the Democratic nomination to now model the kind of behavior that will encourage the public to embrace female leadership. It is a tall task, but it is a mild chore compared to what Warren and the other women in the race have undertaken.

If Biden and Sanders need to know where to begin, they should start by listening to women when you get something wrong. Warren did that herself when she said that life sentences in prison were an acceptable substitute for the death penalty. But Black Womxn For organizer Charlene Carruthers, having endorsed Warren, felt most comfortable approaching her and asking her to reconsider, as the statement didn’t take into account the disproportionate effect sentencing has on black and brown people as well as the inhumanity one suffers during a life sentence. And Warren did, quickly changing her entire policy to reflect her mistake. She revised her stance to create a clemency board to prioritize cases of older Americans who have been incarcerated.

(While Sanders made similar remarks about life imprisonment, his clemency board proposal doesn’t specify helping older incarcerated people; Biden’s proposal only insists that he plans to use his clemency powers to reduce incarceration. Warren’s idea is better, and both men should adopt it now.)

I can’t recall hearing too many stories like the one Carruthers told from any presidential campaign. There is no need to be grandiose about it: for a candidate of any color to hear black women and make a change like that, that is merely a sign of competency and integrity. If those men who aim to lead us through this morass cannot recognize the value of such leadership and get those who question women in power to do the same, we may be irretrievably lost.

Jamil Smith is a Senior Writer at Rolling Stone, where he covers national affairs and culture. Throughout his career as a journalist and Emmy Award-winning television producer, he has explored the intersection of politics and identity. Twitter.