“You don’t work for us, you work with us.” That’s the pitch the boss makes for the exciting new job opportunity he dangles in the opening scene of 'Sorry We Missed You', Ken Loach’s latest lament for the downtrodden. 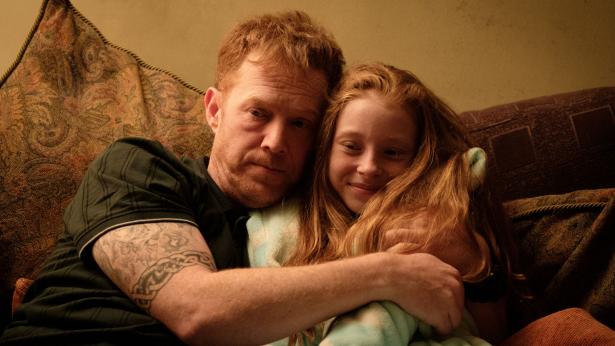 “You don’t work for us, you work with us.” That’s the pitch Maloney (Ross Brewster) makes for the exciting new job opportunity he dangles in the opening scene of Sorry We Missed You, Ken Loach’s latest lament for the downtrodden masses. Maloney, who has the physique and disposition of your gym’s least forgiving trainer, is a supervisor at a package delivery company that independently contracts all its drivers—it’s like UPS by way of Uber. What he’s selling is the ideal of professional autonomy. Drive your own van! Own your own franchise! Be your own boss! To Ricky Turner (Kris Hitchen), it all sounds like a dream come true. Ricky, after all, has spent his whole life paving, plumbing, roofing, mending, and breaking his back for companies that saw him and his labor as disposable. It’s about time he tossed off the shackles of subordination and became, in Maloney’s well-chosen words, “the master of his destiny.”

You don’t need to be a used and abused cog of the gig economy to suspect that this grand promise of self-employment is a lie—that Ricky’s delusions of independence and upward mobility will inevitably be shattered. He is, after all, the main character in a Ken Loach movie: honest, industrious, destined to suffer for the sins of a pitiless society. Loach, the biggest beating heart in the English film industry, has spent most of his half-century in movies and television sticking up for the little guy, for the working men and women of his country. In recent years, that noble imperative has consumed all other aspects of his work; the writer-director of gripping classics like Kes and Riff-Raff now makes diatribes pounded into the vague shape of drama—not so much message movies as messages in search of movies. Sorry We Missed You fits cleanly into that agitprop tradition. But for a good long while, anyway, it does offer the kind of involving quotidian texture that Loach excels at when he’s not simply steering the steamroller over his characters to make a point about society’s ills.

Ricky, as we quickly learn, is head of a household in Newcastle that’s been struggling ever since the 2008 financial collapse, which effectively destroyed their plan to buy their own home. To put a deposit on the big white van he’ll need for his new career, Ricky talks his wife, Abbie (Debbie Honeywood), into selling her car—a decision that makes daily life a little trickier for her. Abbie has her own version of “flexible” zero-hour contract work: She hops all over town to care for the elderly and people with disabilities, picking up clients through an agency that often minimizes her contact with the families (and eats into her paychecks). Ricky and Abbie have two children they barely see because they’re always on the clock. While preteen Liza Jane (Katie Proctor) tries to put on a happy face, even as she absorbs her parents’ stress like a sponge, 16-year-old Seb (Rhys Stone) acts out, cutting class to go tagging with his friends.

Like any good polemicist, Loach understands empathy as something he has to earn. This early stretch, episodic and carefully observed, successfully bonds us to the plight of the Turners. There’s an economy to the storytelling and a affecting sting to some of the moments the filmmaker singles out, like Liza Jane cleaning up around her slumbering folks or Abbie fighting through her exhaustion to express kindness to an ashamed client. And Loach locates some blessed humor, a tonic for characters and audience alike, in Ricky’s front-door encounters with his customers, at one point stopping the movie cold for some amusingly heated sparring between rival soccer fans. As usual, the director’s assembled a first-rate cast: Hitchen and Honeywood make palpable their characters’ frustrations, trying to hold onto hope under their occupational and professional demands. The real find may be Stone, who perfectly conveys the pigheaded selfishness of a teenage wiseass, while also communicating what Seb is really rebelling against: the nonstop grind and hustle that awaits him, should he follow the same path as his parents.

Sorry We Missed You is good enough, in other words, to make one wish that Loach knew when to say when. Ricky, his beleaguered hero, has hitched his hopes to a sucker bet: a corporate enterprise that feeds off his labor without sheltering him from risk. It’s a system not so radically different from the one the filmmaker decried in his last movie, the Cannes-winning I, Daniel Blake, which depicted one virtuous man’s Sisyphean struggle against a health-care industry all but designed to deny him the relief he needs. Working again with longtime collaborator Paul Laverty, who also wrote that didactic downer, Loach again piles onto his working-class protagonists so relentlessly—turning them into everyday martyrs, crushed into fine dust by the grinding wheels of capitalist exploitation—that any genuine poignancy begins to crumble into self-parody. Everything that could go wrong does, and by the time Sorry We Missed You is literally dousing Ricky in piss, you have to wonder if it’s really society, and not just the screenplay, stacking the deck against the Turners.

Which is a shame, because the film didn’t need to force the family through the worse-case wringer to sell its shrewd insights about the mutating injustice of capitalism. Sorry We Missed You sits on a rock-solid foundation of outrage: As Ricky rudely awakens to every reality of his new job—he can’t even bring his daughter along with him on the deliveries because he’s still beholden to the rules his corporate “partner” sets—what he’s really coming to terms with is how wage slavery now masquerades as entrepreneurial opportunity. He’s stuck forever on the hamster wheel, a point damningly underlined by the fade-out ellipsis of the film’s final minutes. It’s all the calculated misfortune aroundthose scenes that feels like overkill. Then again, maybe Loach has just picked the right tool for the job. When your lone goal is to violently stir the conscience of a captive audience, a sledgehammer will do just fine.