The Faces of a New Union Movement

The American labor movement has been reinvigorated in recent years, with teacher-led Red for Ed strikes, the General Motors walkout, the Fight for $15’s push to raise the minimum wage. Sixty-seven per cent of young people 18 - 34 approve of unions. 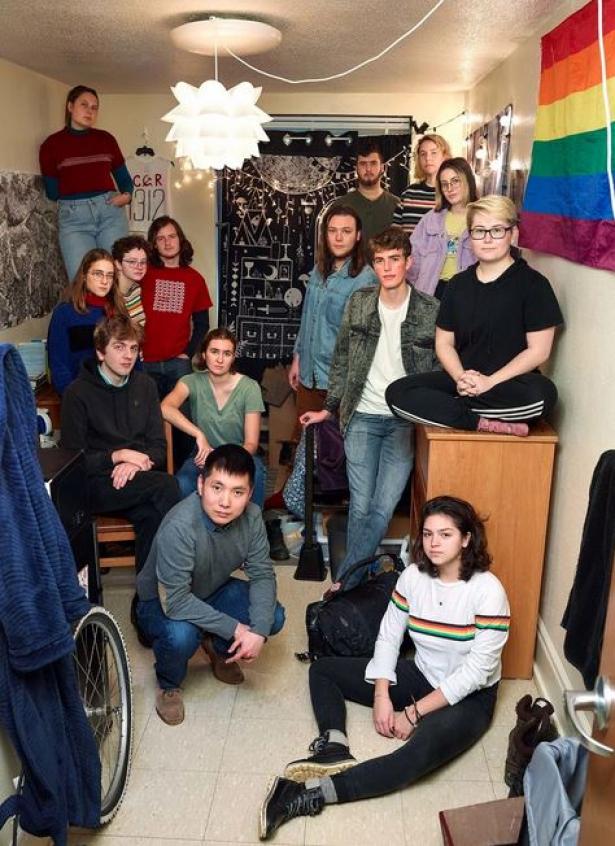 Student workers at Grinnell College, in Iowa, are part of a wave of young people who have organized in sectors with little or no tradition of unions. Sam Xu (pictured front row, left), the union’s former president, said, “Mark Zuckerberg was running, out of his dorm room. I’m running a union out of my dorm room.” - Photo by Chris Buck // The New Yorker

Chris Haag graduated from Hampshire College in 2006, and jumped headlong into the gig economy. He played in a rock band, tried his luck as a filmmaker, and acted in several productions at the Public Theatre, in New York City. He also helped to build sets for the Public, and with the skills he acquired there landed a job as a freelance art installer at moma PS1, in Long Island City, in 2013, where he still works today. At PS1, Haag, who is thirty-six, builds walls and pedestals, moves sculptures, lays carpet, and installs video exhibitions. The schedule is inconsistent: some weeks he’s assigned forty hours of work; other weeks he’s assigned none. But he relies on the job to make ends meet—he earns considerably less from his other current gig, as the drummer of a Brooklyn-based space-rock band called No FAN.

Several years ago, while working at an art fair, Haag had a realization. “The person setting up the walls for the fair is usually a union worker making sixty dollars an hour,” he said. At PS1, Haag was paid only thirty dollars an hour. “What’s going on here?,” he recalls thinking. That discrepancy helped propel Haag and some forty other art installers and maintenance workers at PS1 to vote to unionize in 2015. At the time, some of Haag’s fellow art installers at the museum were making just eighteen dollars an hour; the starting rate hadn’t risen in more than a decade. “There was no rhyme or reason to it,” he said. Two women who were working there for thirteen years, mopping floors and cleaning toilets, earned just $11.25 hour, he said, adding, “That was pretty despicable.” Under PS1’s union contract, minimum pay has climbed to twenty-three dollars an hour; Haag’s hourly pay will increase to $40.09 in 2022.

Haag is part of a wave of young workers who have been unionizing in sectors with little or no tradition of unions: art museums, including the Guggenheim and the New Museum, but also tech companies, digital-media brands, political campaigns, even cannabis shops. At Google, around ninety contract workers in Pittsburgh recently formed a union—a significant breakthrough, even if they represent just a tiny fraction of the company’s workforce. More than thirty digital publications, including Vox, Vice, Salon, Slate, and HuffPost, have unionized. (The editorial staff of The New Yorker unionized in 2018.) Last March, Bernie Sanders’s campaign became the first major-party Presidential campaign in history with a unionized workforce; the campaigns of Eric Swalwell, Julián Castro, and Elizabeth Warren unionized soon after. At Grinnell College, in Iowa, students working in the school’s dining hall unionized in 2016, becoming one of the nation’s only undergraduate-student labor unions. Sam Xu, the union’s twenty-one-year-old former president, said, “Mark Zuckerberg was running Facebook out of his dorm room. I’m running a union out of my dorm room.”

The American labor movement has been reinvigorated in recent years, with the teacher-led Red for Ed strikes, the General Motors walkout, and the Fight for $15’s push to raise the minimum wage. A Gallup poll last summer found that sixty-four per cent of Americans approve of unions—one of the highest ratings recorded in the past fifty years. The highest rate of approval came from young people: sixty-seven per cent among eighteen-to-thirty-four-year-olds. Rebecca Givan, an associate professor of labor studies at Rutgers University, said that many young people are interested in joining unions because they’re “feeling the pinch”—many “have a tremendous amount of student debt, and, if they’re living in cities, they’re struggling to afford housing.” Givan added that many feel considerable insecurity about their jobs. “The industries that they’re organizing in are volatile,” she said. Jake Rosenfeld, an associate professor of sociology at Washington University, said, “Underemployed college-educated workers aren’t buying what was until recently the prevailing understanding of our economy: that hard work and a college degree was a ticket to a stable, well-paying job.”

Rosenfeld cautions that the recent unionization successes won’t be nearly enough to reverse labor’s decades-long slide: around one in three workers belonged to unions in the nineteen-fifties; today, just one in ten does. A digital-media company whose staff unionizes might have just one-hundredth the number of workers of an auto-assembly plant in the South, such as the Nissan plant in Canton, Mississippi, or the Volkswagen plant in Chattanooga, Tennessee, where workers have voted in recent years against unionizing. Still, union leaders hope that the recent organizing successes will help to forge a new generation committed to the American labor movement. When Briana Blueitt, a twenty-three-year-old staffer on the Sanders campaign, first told her father, a retired Army officer from Texas, about the union, he was skeptical. “He said, ‘Oh, you have to pay dues. They’re corrupt. I don’t know if you want to do that,’ ” she said. She has since persuaded him that unionization is worthwhile. “It’s kind of weird, a union for a campaign,” Blueitt said, adding, “At the end of the day, we’re just trying to secure dignified work.”

[Steven Greenhouse was a reporter at the New York Times for thirty-one years; he covered labor and workplace matters there for nineteen. He is the author of “Beaten Down, Worked Up: The Past, Present, and Future of American Labor.”]