Spit On, Yelled At, Attacked: Chinese-Americans Fear for Their Safety

As bigots blame them for the coronavirus and President Trump labels it the "Chinese virus," many Chinese-Americans say they are terrified of what could come next. For American-born Asians, there is a sudden sense of being watched that is unsettling 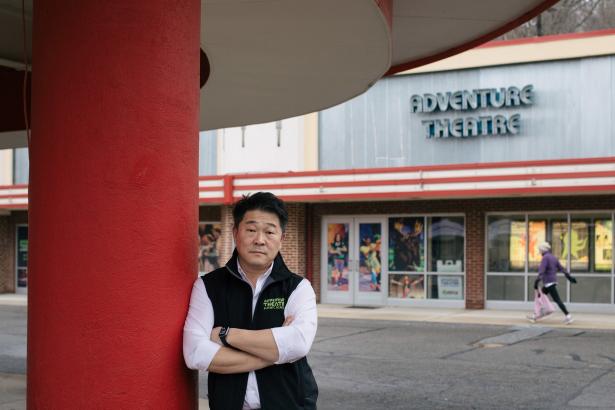 "It's a look of disdain," said Chil Kong, a Korean-American theater director in Maryland. "It's just, `How dare you exist in my world. You are a reminder of this disease and you don't belong in my world.'",Credit: Alyssa Schukar for The New York Times

Yuanyuan Zhu was walking to her gym in San Francisco on March 9, thinking the workout could be her last for a while, when she noticed that a man was shouting at her. He was yelling an expletive about China. Then a bus passed, she recalled, and he screamed after it, “Run them over.”

She tried to keep her distance, but when the light changed, she was stuck waiting with him at the crosswalk. She could feel him staring at her. And then, suddenly, she felt it: his saliva hitting her face and her favorite sweater.

In shock, Ms. Zhu, who is 26 and moved to the United States from China five years ago, hurried the rest of the way to the gym. She found a corner where no one could see her, and she cried quietly.

“That person didn’t look strange or angry or anything, you know?” she said of her tormentor. “He just looked like a normal person.”

As the coronavirus upends American life, Chinese-Americans face a double threat. Not only are they grappling like everyone else with how to avoid the virus itself, they are also contending with growing racism in the form of verbal and physical attacks. Other Asian-Americans — with families from Korea, Vietnam, the Philippines, Myanmar and other places — are facing threats, too, lumped together with Chinese-Americans by a bigotry that does not know the difference.

In interviews over the past week, nearly two dozen Asian-Americans across the country said they were afraid — to go grocery shopping, to travel alone on subways or buses, to let their children go outside. Many described being yelled at in public — a sudden spasm of hate that is reminiscent of the kind faced by American Muslims, Arabs and South Asians in the United States after the terrorist attacks of Sept. 11, 2001.

But unlike in 2001, when President George W. Bush urged tolerance of American Muslims, this time President Trump is using language that Asian-Americans say is inciting racist attacks.

Mr. Trump and his Republican allies are intent on calling the coronavirus “the Chinese virus,” rejecting the World Health Organization’s guidance against using geographic locations when naming illnesses, since past names have provoked a backlash.

Mr. Trump told reporters on Tuesday that he was calling the virus “Chinese” to combat a disinformation campaign by Beijing officials saying the American military was the source of the outbreak. He dismissed concerns that his language would lead to any harm.

On Monday evening, Mr. Trump tweeted, “It is very important that we totally protect our Asian American community in the United States.” He added they should not be blamed for the pandemic, though he did not comment on his use of the phrase “Chinese virus.”

“If they keep using these terms, the kids are going to pick it up,” said Tony Du, an epidemiologist in Howard County, Md., who fears for his son, Larry. “They are going to call my 8-year-old son a Chinese virus. It’s serious.”

Mr. Du said he posted on Facebook that “this is the darkest day in my 20-plus years of life in the United States,” referring to Mr. Trump’s doubling down on use of the term.

While no firm numbers exist yet, Asian-American advocacy groups and researchers say there has been a surge of verbal and physical assaults reported in newspapers and to tip lines.

San Francisco State University found a 50 percent rise in the number of news articles related to the coronavirus and anti-Asian discrimination between Feb. 9 and March 7. The lead researcher, Russell Jeung, a professor of Asian-American studies, said the figures represented “just the tip of the iceberg” because only the most egregious cases would be likely to be reported by the media.

Professor Jeung has helped set up a website in six Asian languages to gather firsthand accounts; some 150 cases have been reported on the site since it was started last Thursday.

Benny Luo, founder and chief executive of NextShark, a website focused on Asian-American news, said the site used to get a few tips a day. Now it is dozens.

“We’ve never received this many news tips about racism against Asians,” he said. “It’s crazy. My staff is pulling double duty just to keep up.” He said he was hiring two more people to help.

No one is immune to being targeted. Dr. Edward Chew, the head of the emergency department at a large Manhattan hospital, is on the front lines of fighting the coronavirus. He said that over the past few weeks, he had noticed people trying to cover their nose and mouth with their shirts when they are near him.

Dr. Chew has been using his free time to buy protective gear, like goggles and face shields, for his staff in case his hospital runs out. On Wednesday night at a Home Depot, with his cart filled with face shields, masks and Tyvek suits, he said he was harassed by three men in their 20s, who then followed him into the parking lot.

actually ridiculed yourself, you really feel it,” he said the following day.

A writer for The New Yorker, Jiayang Fan, said she was taking out her trash last week when a man walking by began cursing at her for being Chinese.

“I’ve never felt like this in my 27 yrs in this country,” she wrote on Twitter on Tuesday. “I’ve never felt afraid to leave my home to take out the trash bc of my face.”

In the San Fernando Valley in California, a 16-year old Asian-American boy was attacked in school by bullies who accused him of having the coronavirus. He was sent to the emergency room to see whether he had a concussion.

In New York City a woman wearing a mask was kicked and punched in a Manhattan subway station, and a man in Queens was followed to a bus stop, shouted at and then hit over the head in front of his 10-year-old son.

People have rushed to protect themselves. One man started a buddy-system Facebook group for Asians in New York who are afraid to take the subway by themselves. Gun shop owners in the Washington, D.C., area said they were seeing a surge of first-time Chinese-American buyers.

At Engage Armament in Rockville, Md., most gun buyers in the first two weeks of March have been Chinese-American or Chinese, according to the owner, Andy Raymond.

More than a fifth of Rockville’s residents are of Asian ethnicity, and Mr. Raymond said buyers from Korean and Vietnamese backgrounds were not unusual. But Mr. Raymond said he was stunned by the flow of Chinese customers — in particular green-card holders from mainland China — that began earlier this month, a group that rarely patronized his shop before.

“It was just nonstop, something I’ve never seen,” he said.

Mr. Raymond said that few of the Asian customers wanted to talk about why they were there, but when one of his employees asked a woman about it, she teared up. “To protect my daughter,” she replied.

For recent immigrants like Mr. Du who are in close touch with friends and family in China, the virus has been a screaming danger for weeks that most Americans seemed oblivious to.

Mr. Du is trying to remain hopeful. He spends his weekends training to become a volunteer with Maryland’s emergency medical workers. He is part of a group of Chinese-American scientists who organized a GoFundMe account to raise money for protective gear for hospital workers in the area. In three days, they raised more than $55,000, nearly all in small donations.

But he said he was afraid of the chaos that could be unleashed if the United States death toll rises significantly.

“Katrina is not far away,” he said, alluding to the unrest in New Orleans following Hurricane Katrina in 2005. “And when all these bad things come, I am a minority. People can see my face is Chinese, clearly. My son, when he goes out, they will know his parents are Chinese.”

For American-born Asians, there is a sudden sense of being watched that is as unsettling as it is unfamiliar.

“It’s a look of disdain,” said Chil Kong, a Korean-American theater director in Maryland. “It’s just: ‘How dare you exist in my world? You are a reminder of this disease, and you don’t belong in my world.’”

He added: “It’s especially hard when you grow up here and expect this world to be yours equally. But we do not live in that world anymore. That world does not exist.”

One debate among Asian-Americans has been over whether to wear a mask in public. Wearing one risks drawing unwanted attention; but not wearing one does, too. Ms. Zhu said her parents, who live in China, offered to ship her some.

“I’m like, ‘Oh please, don’t,’” she said. She said she was afraid of getting physically attacked if she wore one. “Lots of my friends, their social media posts are all about this: We don’t wear masks. It’s kind of more dangerous than the virus.”

A 30-year-old videographer in Syracuse, N.Y., said he was still shaken from a trip to the grocery store last week, when the man ahead of him in the checkout line shouted at him, “It’s you people who brought the disease,” and other customers just stared at him, without offering to help. That same day, he said, two couples verbally abused him at Costco.

“I feel like I’m being invaded by this hatred,” said the man, Edward, who asked that his last name not be used because he feared attracting more attention. “It’s everywhere. It’s silent. It’s as deadly as this disease.”

He said he had tried to hide the details of what happened from his mother, who moved to the United States from China in the 1970s. But there was one thing he did tell her.

“I told her, whatever you do, you can’t go shopping,” he said. “She needed to know there’s a problem and we can’t act like it’s normal anymore.”

[Sabrina Tavernise is a national correspondent covering demographics and is the lead writer for The Times on the Census. She started at The Times in 2000, spending her first 10 years as a foreign correspondent.

Rich Oppel is a national enterprise and investigative correspondent based in New York. Since joining The Times in 1999, he has also covered business, Washington, a national presidential campaign, and for six years was a war correspondent in Iraq, Afghanistan and Pakistan.]