With a Quarter of the World’s Population Under US Sanctions, Countries Appeal to UN to Intervene

Eight countries, representing around one-quarter of all humanity, say that Washington’s actions are undermining their response to the COVID–19 pandemic sweeping the planet.

March 29, 2020 Alan Macleod MintPress News
Printer friendly
With a Quarter of the World’s Population Under US Sanctions, Countries Appeal to UN to Intervene Published March 29, 2020 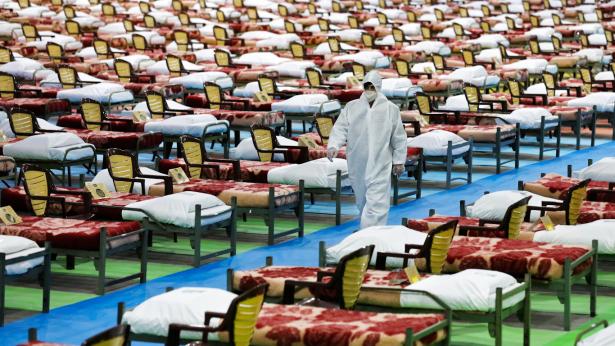 A person in protective clothing walks through a temporary 2,000-bed field hospital for COVID-19 coronavirus patients set up by the Iranian army at the international exhibition center in northern Tehran, Iran, March 26, 2020.,Ebrahim Noroozi | AP

The governments of China, Cuba, Iran, Nicaragua, North Korea, Russia, Syria, and Venezuela – all under sanctions from the United States – sent a joint statement to the United Nations Secretary-General, the UN’s High Commissioner on Human Rights and the Director-General of the World Health Organization calling for an end to the unilateral American economic blockade, as they are, “illegal and blatantly violate international law and the charter of the United Nations.”

The eight countries, representing around one-quarter of humanity, say that Washington’s actions are undermining their response to the COVID–19 pandemic sweeping the planet. “The destructive impact of said measures at the national level, plus their extraterritorial implication, together with the phenomenon of over-compliance and the fear for ‘secondary sanctions,’ hinder the ability of national governments” in procuring even basic medical equipment and supplies, including coronavirus test kits and medicine. It is a “hard if not impossible deed for those countries who are currently facing the application of unilateral coercive measures,” to cope, they conclude.

The letter was shared on Twitter by Joaquin Perez, Venezuela’s Permanent Ambassador to the UN.

Today 🇨🇳,🇨🇺,🇰🇵,🇮🇷,🇳🇮,🇷🇺,🇸🇾,🇻🇪 addressed the #UNSG on the negative impact of sanctions on nat’l efforts to fight COVID19. We cannot allow a zero-sum game in the midst of a pandemic. #SanctionsAreCriminal & must end now! Political calculations cannot get in the way of saving lives! pic.twitter.com/ujnmyf7ASL

That U.S. sanctions are “blatant violations of international law,” the letter states, is not in doubt. As the American Special Rapporteur to the UN, Alfred de Zayas, notes, only sanctions expressly verified and imposed collectively by the UN Security Council can be considered legal; any unilateral punishment is, by definition, illegal. De Zayas, a legal scholar, notes that sanctions are tantamount to a “collective punishment” against a population, an explicit violation of multiple articles of the UN Charter, the foundation of international law.

De Zayas traveled to Venezuela last year, describing the U.S. sanctions as akin to a medieval siege and accusing the Trump administration of “crimes against humanity.” The United Nations Human Rights Council formally condemned the U.S., called on all member states to break the sanctions, and even began discussing the reparations Washington should pay to Venezuela, noting that Trump’s sanctions were designed to “disproportionately affect the poor and most vulnerable.” None of this was reported in any major American media outlet at the time.

The sanctions meant that Venezuela was unable to import key medicines for conditions like cancer and diabetes, leading to scores of deaths. A 2019 report from the Washington-based Center for Economic Policy Research conservatively estimated the sanctions killed 40,000 Venezuelans between mid-2017 and 2018.

Yesterday, the Trump administration turned the screw tighter, putting out a bizarre hit on President Nicolas Maduro, offering $15 million to anybody who could bring him to them in chains. Other key figures like Minister of Defense Vladimir Padrino and Head of the Constituent Assembly Diosdado Cabello also had bounties placed on their heads, supposedly because they were part of a drug trafficking ring.

The U.S. is also turning up the heat on COVID-19 plagued Iran. Senior Washington insiders like Newt Gingrich are dreaming that their sanctions will finally bring about regime change in the Islamic Republic. Sanctions led to the Iranian rial losing 80 percent of its value, with both food prices and unemployment doubling. While medicine is technically exempt from sanctions, in reality, Washington has frightened away any nation or corporation from doing business with Tehran. Even as coronavirus was raging through the country, no nation was willing to donate even basic supplies to Iran. Eventually, the World Health Organization stepped in and directly supplied it with provisions. An October report from Human Rights Watch noted that “the overbroad and burdensome nature of the US sanctions has led banks and companies around the world to pull back from humanitarian trade with Iran, leaving Iranians who have rare or complicated diseases unable to get the medicine and treatment they require.” At least 2,378 Iranians have died of COVID-19, many of them needlessly.

Despite the embargoes they are under, many countries on the sanctioned list have contributed greatly to the world’s fight against COVID-19. Despite facing a shortage of basic supplies like soap, Cuba continues to export doctors and other medical staff around the world, often to the worst affected areas. Meanwhile, China, the original epicenter of the outbreak, appears to have come to grips with the pandemic and is now exporting its battle-hardened medical staff as well as huge quantities of crucial supplies. This has been presented in the U.S. as a dastardly plot to “curry favor” and shift blame away from their supposed mishandling of the virus in the first place.

The United States has long had a fractious relationship with the UN, constantly using its veto power to sink progressive legislation that would weaken its military, cultural or economic hegemony. In 2017, the U.S. formally pulled out of the UN’s scientific and cultural organization, UNESCO, in response to the group admitting Palestine. American sanctions are not popular at all in the world; in November, for instance, the UN voted 187-3 (U.S., Israel, Brazil) to condemn Washington’s embargo on Cuba. It was the twenty-eighth consecutive year with vote totals varying little from year to year.

The sanctioned countries warn that Trump’s actions are killing not only Americans at home but people all over the world. “We cannot allow for political calculations to get in the way of saving human lives,” they conclude. However, precisely because the U.S. has so much power on the world stage, it is unlikely their protestations will get them very far.

lan MacLeod is a Staff Writer for MintPress News. After completing his PhD in 2017 he published two books: Bad News From Venezuela: Twenty Years of Fake News and Misreporting and Propaganda in the Information Age: Still Manufacturing Consent. He has also contributed to Fairness and Accuracy in Reporting, The Guardian, Salon, The Grayzone, Jacobin Magazine, Common Dreams the American Herald Tribune and The Canary.

MintPress News is an independent watchdog journalism organization that provides issue-based original reporting, in-depth investigations, and thoughtful analysis of the most pressing topics facing our nation.

We focus our coverage on issues relating to the effects of special interest groups, big business and lobbying efforts and how they shape policies at home and abroad, including American foreign policy.  Through the lens of social justice and human rights, we report on how these dynamics drive our foreign affairs and impact the world, and examine the effects they have on our democracy and freedoms as defined by the constitution.

Journalism, as defined by the first amendment, plays the role of watchdog over the government. This is what inspires our style of reporting at MintPress News.

We are a for profit organization. Our goal is to be funded through advertising, syndication, and other traditional funding sources. Because we strongly believe in citizen driven journalism, we accept online donations. However, we are committed to rejecting any funding sources that attempt to influence what we report on and how we do so.