While fashion designers and brands continue to grab headlines and praise for their “heroism,” garment workers are fundraising for basic needs. 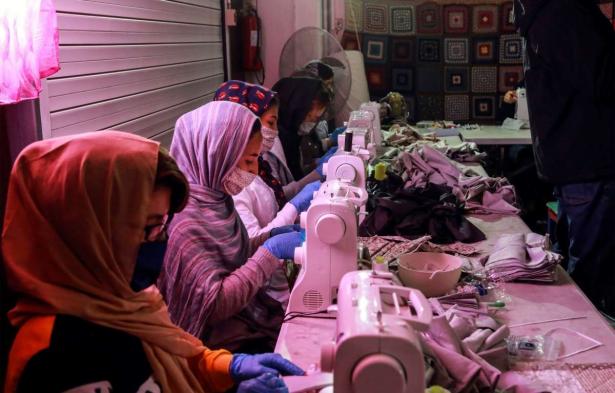 Migrants sew handmade protective face masks at the premises of the nongovernmental organization "Team Humanity" on March 25, 2020, on the island of Lesbos, Greece, as the country is under lockdown to stop the spread of COVID-19. , Manolis Lagoutaris/AFP via Getty Images

Fashion labels from Christian Siriano, H&M and Zara to luxury firms like LVMH, Kering and Prada have recently pledged to redirect their resources to making medical masks and (non-medical-grade) face mask covers. If all goes according to plan, fashion firms will donate many tens of millions of masks to the battle against COVID-19 in the hardest-hit places in the U.S. and Europe.

But when fashion designers and CEOs of fashion firms promise to make masks, they don’t mean that they will be personally making the masks. They mean that the local and international garment workers they employ in factories where they contract apparel production will be taking on this new task. The distinction is important yet neglected in the mainstream media and public discussions about the fashion industry’s emerging role in this global health crisis.

To acknowledge that garment workers are now responsible for producing a global supply of masks is not only a necessary corrective; it’s an urgent one. The distinction pushes back against the historical tendency to treat this group of workers — who are predominantly women and girls of color and immigrants in the countries where they live and work — as merely technologies of a massive global industry. By and large, fashion executives and the public view garment workers as low-cost, unskilled and expendable instruments of cultural and economic production. It’s not uncommon for garment workers to be paid less than the minimum wage, to say nothing of a living wage. When garment workers organize and protest for better working conditions, they’re routinely met with a raft of retaliatory measures from firings and intimidation to violence, including torture and murder, as was the case with former garment worker and organizer Aminul Islam.

More often, though, they’re not seen at all. Fashion designer Christian Siriano tweeted that his “sewing team” will be handling the production, but other brands and the news stories about them fail to mention the actual people who will be making these products. A typical article is one published recently in The New York Times. The article reports on brands that will be “rebooting” their factories for mask production but doesn’t mention garment workers. The photograph accompanying the article shows a factory floor of sewing machines but no workers. The image perfectly illustrates how the erasure of garment workers is also part of their dehumanization as merely mechanisms of production.

Garment workers’ erasure and dehumanization have other serious implications as well. While we applaud fashion labels for their corporate good deeds, we ignore the fact that the vast majority of garment workers making these masks will be using public transportation to go to work in factories that are poorly ventilated and dirty, where masks for garment workers themselves are few and far between, where the bathrooms have no soap or hand sanitizer (and sometimes no water), and where social distancing measures — and paid sick leave — are non-existent. And those are the lucky ones.

Quarantine and self-isolation measures have led to worldwide store closures and a free-fall in consumer demand. As a result, garment factories are losing production orders and letting go of workers who mostly won’t get paid for work they’ve already done, won’t be offered severance packages and aren’t eligible for unemployment benefits. Bangladesh, Myanmar, Cambodia, China and Vietnam are all reporting hundreds of millions of dollars’ worth of canceled orders, massive job losses and sick workers who continue to work because not working is not an option. (On March 30, H&M announced in a press statement that it will honor commitments to pay Bangladeshi garment factories for work already done. So far, it’s the only brand to do so.)

Those who have found work making masks see it not as an opportunity, but as a last resort. “My company closed down last week. They told us all that because of the virus, they had to close the doors. I’ve been without work before but this time it’s different. Every factory is shut down,” says Pablo Hernandez, a member of the Garment Worker Center in Los Angeles. “I heard about a stimulus check that everyone is getting but I don’t have papers. I’m not going to get anything.… My boss called me yesterday and asked if I wanted to work making masks for hospitals. I said yes and worked today. They are paying us for what we make [by the piece]. I worked all day, probably 10 hours. I’m lucky if I made $50 today.”

The piecework system Hernandez is describing compensates workers based on their output, not their time. This means that workers have no guaranteed amount of payment. As Director of the Garment Worker Center Marissa Nuncio told Truthout, “There are two main vehicles of wage theft; piecework is one of them. What’s frustrating is that the piece rate system is legal.”

While fashion designers and brands continue to grab headlines and praise for their “heroism,” garment workers are fundraising for basic needs.

When garment workers aren’t seen as workers, their demands for greater worker protections and safer working conditions also aren’t heard. Make no mistake, though, garment workers are telling us exactly what they need. Organizations representing garment workers like the Garment Worker Center in Los Angeles and the Asia Floor Wage Alliance have published clear demands addressed to the global brands whose clothes they make. These demands include the implementation of World Health Organization recommendations and guidelines to prevent workplace exposure to COVID-19, the creation of a COVID-19 Workers’ Fund to financially support workers who get sick and can’t work, universal paid sick leave and health care, and other employment benefits. The Garment Worker Center has also launched its own COVID-19 Emergency Relief Fund for L.A. Garment Workers — a stark reminder of the deeply asymmetrical structure of the fashion industry. While fashion designers and brands continue to grab headlines and praise for their “heroism,” garment workers are fundraising for basic needs.While many have rightly pointed out that the pandemic is shining a light on the value of so many previously under-valued workers — grocery and pharmacy clerks, food distribution workers, truck drivers, sanitation workers, and postal and delivery workers — garment workers are rarely included in these shout-outs. This isn’t surprising. Discussions about labor in the media, in government and in academia routinely forget about the 40 million (mostly female) workers in the global garment industry.

Nuncio says that the pandemic and garment workers’ contributions to the efforts to keep people safe in the midst of it — by risking their own and families’ lives — may finally make visible “how much we rely on [this] migrant workforce.” I hope she’s right. But Nuncio’s optimism can’t be realized if their labor, skills and concerns are still being hidden behind the label.

Minh-Ha T. Pham researches and writes about fashion labor in the contexts of globalization and digital/informational capitalism. Follow Minh-Ha on Twitter: @minh81.