Coronoavirus reveals the divide between the socialist principal of using health care to meet human needs and the capitalist practice of treating health care as a commodity. 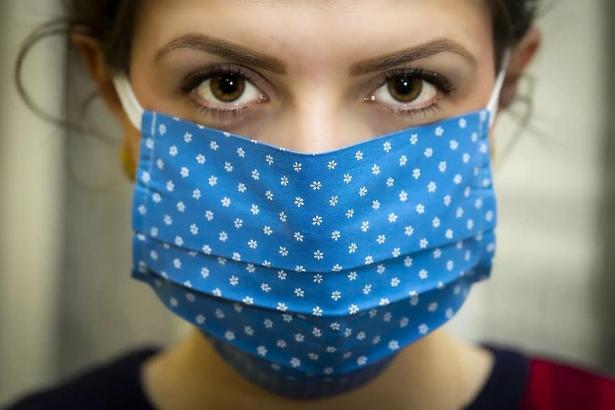 Homemade masks have become a symbol of the virus in North America, after the failure of governments and just-in-time supply chains to provide sufficient PPE.,

The COVID-19 emergency underscores longstanding truths about capitalism and socialism. Acting on the most immediate demands that it raises draws us directly into a confrontation with core issues.

COVID-19 is exceptionally contagious, and those who are infected by it do not necessarily show symptoms. These two traits, in combination, guarantee rapid spread of the virus unless certain requirements have been met.

Most directly, there must be ample supplies of the appropriate diagnostic tests, personal protective gear (masks, gloves, hand sanitizers, etc., especially for healthcare workers), and ventilators.

At a still broader level, there are certain additional requirements. There should be universal “sick leave,” so that individuals do not have to fear loss of income if they stay away from their jobs for health reasons, and there should be unemployment compensation for all those whose jobs are terminated. Further, no person should lack housing (without which self-quarantining is impossible). Also, no distinction should be made, in matters of healthcare, between citizens or legal residents and those lacking such status (given that any inhabitant of the society is a potential transmitter of the virus). Finally, the government must have both the capacity and the political will to order the emergency mobilization of resources as needed, for everything from educating the public to assuring food supplies to rapidly building temporary hospitals.

In all these critical dimensions, the United States falls short. But on top of these shortcomings, which are not new, the present administration has reacted to the crisis in a uniquely perverse manner. For weeks, even after being informed of the pandemic, it scoffed at the danger and refused to adopt a diagnostic test that had been made available by the World Health Organization. Even when the danger could no longer be questioned, it failed to use its powers to order emergency production of vital equipment. Instead of promoting internal and international solidarity, it encouraged scapegoating by ethnicity (Trump calling the virus “Chinese,” thereby fostering racist attacks against individuals of East Asian descent), intensified its already devastating sanctions against Iran and Venezuela, and tried to obstruct Cuba’s remarkable program of international medical aid. It also took advantage of the emergency to further weaken environmental protections, and made any paltry relief-measures for working people conditional upon an enormous financial bailout to the biggest corporations.

As if all this were not enough, the president engages in the most shameless forms of corrupt self-serving. At his daily news conferences, he either excludes critical questions or denounces those who raise them. He requires that his name be printed on all relief-checks. His apportionment of federal aid to the various states is determined not by their respective needs but rather by whether he likes or dislikes their governors. In defiance of medical opinion, he promotes a drug of uncertain merit in whose production a former lawyer of his has a financial interest. More generally, he presses for a quick return to economic “normality” irrespective of the risk to people’s lives.

The deficiencies of the US emergency-response epitomize the capitalist approach to healthcare. The essence of this approach is to treat healthcare as a commodity and to make treatment dependent upon a person’s ability to pay. Of course, this is partially mediated by insurance, but if the insurance is also capitalist, then the individual may still be at risk of heavy financial burden if not the actual denial of necessary medical procedures. The singular US response to the cost of private insurance has been to draw individuals’ payments in part from their employers. The absurdity of such an arrangement, if not apparent earlier, has been highlighted by the current crisis, in which millions of workers suddenly lost their health insurance along with their jobs.

The clash between capitalist principles and human need is especially striking in the sphere of healthcare because we find here an extraordinarily glaring discrepancy between the potential cost of a recommended medical procedure and the capacity of a person of average or low income to pay for it. The notion of measuring need through the market fails here so completely that even in otherwise capitalist countries, it has been widely recognized that the provision of healthcare must be informed by socialist principles. Still, the actual implementation of such an approach depends on pressure from the organized working class (which, as a political force, has been notoriously weak in the United States). And there remains the problem that a capitalist regime will tend to weaken public health guarantees as it has, for example, in England, whose National Health Service is increasingly undercut by privatizing measures.

A more thoroughgoing socialist approach presupposes the socialist reorganization of society, which makes possible a preventive approach to healthcare. Moreover, if a socialist approach is applied not just to insurance but to the health services themselves, then it becomes easier to allocate skills and supplies on the basis of need. In the present pandemic, I heard of an instance in Florida where a private hospital whose labor force was momentarily under-utilized threatened to fire any of its nurses who would offer their services, on an emergency basis, to another local hospital – a competitor in the marketplace – that had an overflow of COVID-19 patients.

A socialist approach to healthcare thus goes beyond responding just to market demand or to private interests and instead builds an infrastructure that can respond to emergency needs. This was strikingly shown just now in China, where urgently needed temporary hospitals were built (in Wuhan) in just two weeks. Moreover, a fully socialist approach, with its corresponding culture of cooperation, makes it possible, as Cuba has repeatedly shown, to extend health services on a large scale to people in other countries.

The capitalist framework, by contrast, not only suffers from the above-noted drawbacks; in addition, in its current “neoliberal” form, it has increasingly prioritized cost-cutting. In the same way that manufacturing industry, using new technologies, turns more and more to “just in time” production (not building up inventories, thereby risking sudden shortages), so also the healthcare industry, in its drive for “efficiency,” closes down hospitals and reduces its total numbers of beds, which then come up short in the event of an emergency. Ironically, New York Governor Andrew Cuomo, who has emerged as a prominent critic of the federal government’s failures, was himself responsible for reducing from 50,000 to 30,000 the number of hospital beds in his own state.

The US system uniquely embodies capitalist priorities not only in its minimizing of any “public interest” restraint, but also in its obsession with being the world’s top military power. Where socialism encourages its adherents to view the international realm as a sphere of cooperation, capitalism highlights competition and domination. The US government explicitly defined its global role (in the National Security Strategy document of 2002) as requiring unchallenged military supremacy. This means that there can never be, in its eyes, any limit to “defense” expenditures, but that – in consequence of this – all other budget items are under severe constraint. The military emphasis is supposedly justified on grounds of “national security.” And yet what can more severely undermine a country’s security than the government’s inability to protect its population against a deadly pandemic?

We should keep in mind also the demographic contours of the virus’s spread. The nature of the illness is such as to threaten especially those persons who are forced into close proximity with others. Calls for “social distancing” are unevenly implemented. Healthcare workers are of course especially at risk, but so also are other workers providing vital services, e.g., in food production and distribution, as well as people forced by poverty to live in crowded conditions. Uniquely vulnerable are those confined to prisons, jails, or detention centers, as they typically lack any form of protection. This is an especially vast sector in the US, where incarceration has boomed while the public health infrastructure has been cut back. Contagions that escalate behind the walls, however, flow back into the outside society.

The pandemic has triggered an economic depression. It should lead a lot of people to reconsider assumptions they may have held about the permanence of capitalism. Certainly it underscores the incapacity of the most world’s most powerful capitalist government to respond to human need. While many individuals in the US are risking their own health to serve the rest of society, their efforts are more thwarted than aided by the dominant institutions. Corporations as well as key agencies of government prioritize profits and accumulation over public health. As a huge sign recently displayed by a group of New York workers put it, “Capitalism is the virus.”

Capitalism not only enables the spread of COVID-19; it will also use public health concerns as a pretext for augmenting surveillance and disruption of dissident political activity. Its resort to such measures will increase as the economic hardship resulting from the depression brings a rise in mass discontent. Even before the onset of COVID-19, popular majorities in the US supported the idea of universal free healthcare. In the near term, however, it is clear that the ruling class’s opposition to this idea will prevail. The US government, already seen as an aggressive force on the world stage, will then also come to be perceived as both ineffective and undemocratic at home.

The question will then be to what extent people around the world (including within the US) will be able to respond to this state of affairs without being forcibly blocked from implementing alternative models.

To summarize: the most immediate necessary requirements are:

-- no discrimination against non-citizens;

-- international sharing of potential life-saving resources (including drugs being developed in Cuba) and an end to economic sanctions.

In the longer term, hospitals and pharmaceutical production would need to be brought under social ownership and control; the social causes of ill health (poverty, pollution, poor diets, etc.) would have to be overcome; and the environmental imbalances leading to pandemics would need to be reversed.

These are radical demands, but we are living in an extreme situation that requires a radical response.

VICTOR WALLIS is the author of Red-Green Revolution: The Politics and Technology of Ecosocialism (Political Animal Press, 2018), Democracy Denied: Five Lectures on U.S. Politics (Africa World Press, 2019), and Socialist Practice: Histories and Theories (Palgrave Macmillan, 2020). www.victorwallis.com. This article was originally posted at politicalanimalmagazine.com and has been slightly revised.