Trump and the Militias Consummate Their Marriage

It’s the new normal: armed fascists intimidate elected officials who oppose the President as Republicans either stay silent or – like Trump himself – egg them on.

May 4, 2020 Max Elbaum Organizing Upgrade
Printer friendly
Trump and the Militias Consummate Their Marriage Published May 4, 2020 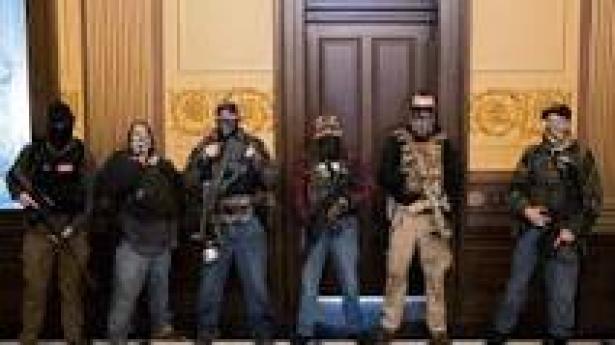 An armed protest in the Michigan state legislature has brought to light how the pandemic is dangerously deepening divisions across America.,Seth Herald/Reuters

Donald Trump tweets so many outrageous things and tells so many lies, it’s easy for any particular statement to get buried in the shitstorm.

But a presidential call to “liberate” states led by elected officials of the opposition party while Trump supporters carry guns into their state capitols shouldn’t be one of them.

A CALL TO ARMS

Republicans legislators, instead of condemning these threats of violence, voted to authorize a suit against the Governor for exceeding her authority.

And Trump tweeted “Liberate Virginia,” “Liberate Michigan” and stressed the “Second Amendment” (read: “Bring Your Guns”) dimension of the protests.

Alignment between Trump, the GOP establishment and armed confederate flag-wavers isn’t surprising or new. But these demonstrations saw a level of coordinated action and messaging that went beyond their previous associations.

At Charlottesville, for instance, Trump saw good people “on both sides” of the fascist violence. Numerous Republicans attempted to distance themselves from the naked white supremacists. And the Charlottesville right-wing rally was not organized out of the White House or by top GOP donors and lawyers.

This round was different. The anti-lockdown rallies were part of a coordinated campaign anchored by former White House officials, a number of state-based conservative policy groups, and a coalition of high level GOP donors. Attorney General William Barr has  aligned the Justice Department with the protesters’ goals. From Fox News to talk radio the entire right-wing media machine promoted the actions.

Most important, Trump’s tweets signaled that the White House itself backed the rifle-carrying militia component of the protests. His message was a call to defy legal authority and to oust elected officials not to Trump’s liking.

Trump’s tweets were immediately embraced as a “call to arms” throughout the insurrectionist right wing. There was an immediate surge in twitter posts about the President and the “boogaloo” (a term denoting armed insurrection in the world of the conspiracy-theory infused right).

It’s the new normal: armed fascists intimidate elected officials who oppose the President as Republicans either stay silent or – like Trump himself – egg them on.

The tightening of the Trump-GOP-Militia embrace is rooted in the way the COVID-19 crisis has affected Trump’s re-election plans and, beyond that, the underlying agenda of the ruling class faction his administration represents.

Pre-pandemic, Trump and his team were confident they had a formula that would win the President a second term. Run on racism and a “humming economy.” That the economy was far from humming for the majority was of little concern. It was benefitting enough sectors in battleground states that – combined with those roped in by MAGA-brand bigotry and with aggressive voter suppression – he would win a majority in the racially skewed electoral college.

COVID-19 has thrown that plan up in the air. The economy is in shambles and all but certain to be in trouble through the election. Trump’s China-bashing resonates in many sectors, but so far hasn’t proved sufficient to erase awareness of Trump dismissing the danger of COVID-19 and doing nothing about it for eight crucial weeks. And his rally-substitute daily press briefings have been a disaster, putting his self-centeredness and bleach-injecting ignorance on display.

PIVOT TO AN “ANTI-LOCKDOWN” MESSAGE

A repackaging of the racism, xenophobia, and all-wealth-to-the-rich core of Trumpism was required. The result, insightfully dissected in a recent column by Thomas Edsall, puts “anti-lockdown” at the center:

“…offers something for everyone: small-business, concerns for the working class, anti-elitism for resentful rural whites, fetishism of guns for NRA, dislike of government for traditional conservatives…. anti-quarantine protests will distract the electorate. If the election is a fight between Trump vs governors who refuse to open their economies, Trump doesn’t have to defend his record on Covid-19. He’s an advocate for liberty! [He] will frame the 2020 election as a choice between the pro-open economy Trump versus the Washington insider #BeijingBiden who is complicit in China’s efforts to hurt working class Americans.”

It is a powerful message with the potential to influence large numbers well beyond Trump’s base. With the economic crisis deepening millions have to worry about how to feed, clothe and house themselves and their families as well as keeping them healthy. Government assistance is totally inadequate, and even if our side makes the maximum gains possible under the current balance of forces, it is likely to stay that way. So sentiment in favor of “getting back to work” – even with major health risks – is likely to grow.

But Trump’s problem is that his inaction and blunders – combined with effective messaging by public health experts, Bernie Sanders, and a host of progressive, labor and community-based organizations – means the majority is still concerned about  “reopening too soon” and favors protecting people’s health. After an initial bump, the President’s approval rating has started to sink, even in battleground states.

So the Trumpists’ looked for a way to jump-start their adjusted message. For that Fox News and twitter are not enough. Drawing from their anti-Obama Tea Party playbook, they decided it was time for actual physical demonstrations to gin up their base, grab headlines, and infuse every news cycle with their frame on the 2020 contest.

But who is going to go out there in a crowd with no social distancing, no masks, and a message that, at least initially, is not going to be popular? Certainly that’s not a risk big funders, GOP lawyers and elected officials are going to take!

Who do you turn to? How about blatant white supremacists, conspiracy mongers, confederate flag-wavers, anti-vaxxers, and armed militias? These are the people willing to defy public health regulations, pose for cameras brandishing weapons, and carry signs that say, “Sacrifice the Weak.”

So the welcome mat was put out for them by the President himself.

“I’d like our viewers and listeners to ask themselves a question: If hundreds of African Americans or Latinos showed up in cities around the country brandishing automatic weapons, what would be the response of the country to this? Why is this being almost accepted and normalized now as a method of protest? …we should make no mistake, that this country is edging closer and closer to neo-fascist authoritarianism.”

There is a deeper level as well. Unlike the narcissist in the White House, the people in the top echelon of the fossil fuel industry, the military-industrial complex and the leading right-wing billionaires have bigger concerns than what happens to Trump individually. To them, he’s just the best choice for implementing their agenda of transferring more wealth to the 1%, more austerity for the 99%, doing nothing about climate change and maintaining U.S. global hegemony through military might. Trumpism is also their ideal vehicle for suppressing opposition to this unpopular program by smashing the labor movement and undermining the power of communities of color through large-scale disenfranchisement, incarceration and deportation.

These parasites aren’t haters on Joe Biden. He’s not their first choice. But they could easily live with a President who carried out the “back to the old normal” program that Biden often indicates is his vision of the future.

But the heavyweights in the Trump coalition do not believe a Biden administration could pull it off.

Those who guide Trump to power are closely attuned to the political winds and they can count. They recognize there is growing support for Medicare for All, a Green New Deal, and an end to mass incarceration. They see that that the pandemic is sparking tenant organizing, rent strikes, job actions, and worker strikes that demand protections for renters, workers and the poor way beyond anything that existed pre-COVID-19.

They know that even before the pandemic people under 30 were the most left-wing generation in decades. They see that COVID-19 fightback efforts like Bernie Sanders’ post-campaign stance, The People’s Bailout (whose principles have over 100 congressional endorsers), and many others are pushing demands for structural change into the mainstream. They notice that even the major liberal media are carrying critiques not just of the disparities in the way COVID-19 is impacting different populations but of longstanding inequalities in U.S. society. They see handwriting on the wall as labor organizations support incarcerated people, domestic workers ally with LGBTQ organizations, climate justice activists rally for immigrant rights and a general spirit of “social solidarity” builds among a host of vulnerable and less vulnerable sectors.

They observe the New York Times running a major piece titled “The America We Need” which more or less promotes Bernie’s program without Bernie. They monitor demographic change and know that their core base among older whites is declining while the country’s proportion of people of color is growing.

THEIR NIGHTMARE IS OUR DREAM

They add it all up and see a Biden win not as a safe harbor but as a dangerous open door. They believe coming out of the pandemic there will be irresistible pressure on a new administration to provide universal health and economic protection for working people, tax the wealthy, tackle climate change and restore voting rights.

They fear even small steps in those directions would start an avalanche capable of toppling their already shaky neo-liberal order.

So their faction of big capital goes all in for Trump and the GOP, and deploys fascist militias as the shock troops of their campaign.

Historical experience shows that when a powerful wing of a ruling class throws in with grassroots fascists, a fascist or fascist-like regime moves from back-drawer possibility to imminent danger.

We need to be as clear-eyed as our enemies about the stakes in the current polarization, the possible roads ahead, and where the pivot point of battle lies.

They think November will mark a choice between two roads.